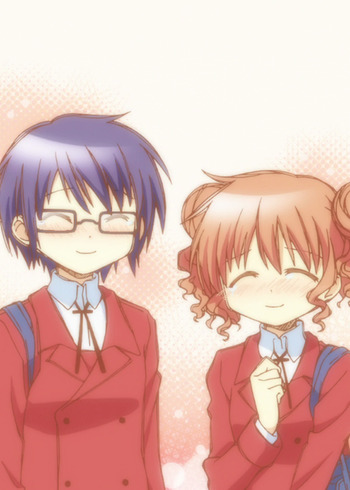 As expected, these two OVA feature the frantic last few weeks of Sae and Hiro's time at Yamabuki Private High School, winding up the full run of Hidamari Sketch.  Any thoughts of extending the run to include Yuno's graduation are abandoned, despite three minutes of abject 'selfishness' expressed by the four non-graduating tenants of Hidamari Apts. (one of the best gags in the set of two episodes).

The first episode deals with the ramifications of the entrance exams that Sae and Hiro were committed to in the last episodes of Honeycomb.  They've both passed them, but now comes the ordeal of the wait to see if the girls are accepted by the university of their choice.  In the long wait for Hiro, she is accepted by her third choice, rejected by her fourth choice, and must suffer the agony of being put on a waiting list before a final decision by the college she made first choice.  Then, the thoughts that Sae's literary college cannot be Hiro's art college and finally being separated after three years at Yamabuki.  This thought haunts Yuno as she is coming to cope with the loss of her two senpai.

The second episode, the graduation ceremony, reveals the origin story of Hiro and Sae's first meeting, a memory dredged up by the Landlady who is concocting a plan to create an association of former Hidamari Apartment grads.  Plans to keep in touch are made.  Then the impact of Hiro and Sae's graduation on the other girls of Hidamari, particularly Yuno, whose separation from family was softened by the seniors' kindness.  We learn how Sae got into writing, how Hiro became a good cook (and how she gained a little weight ... lumps on head for Miyako); all is revealed in a retrospect that is forced to look to the future.

In the opening sequences of Honeycomb, there was a portion where Yuno looked back to the parents and teachers who had been influential ... a group of ten, if that.  In the last episode, this clip is replaced by a wider span of fellow students, townspeople, and other characters who graced the episodes of the past four seasons ... a horde of twenty moving quickly towards thirty.  A gentle reminder that there are so many people in one's life who casts a little sunshine against the drabs.

I noted that the coloration was more subdued than used in Honeycomb, particularly those of the girls in their caricature forms.  A touch for the somber occasion that befits a milestone event.  The music was well crafted, particularly the recraft of the original Hidamari Sketch theme from season one played during the graduation ceremony over the Principal’s inspired speech.  It was like this project and the series meant to go out ‘all out’ without going ‘bonkers.’

With the graduation arc comes the end of the Hidamari Sketch franchise, a memorable viewing that started rough but once one understood the driving premise of the six girls who learn to bond with each other, circumstances are no longer all that important, either to the viewer or the characters that enriched the experience.  There are one or two specials I haven't seen, but a little searching might find one more gem in the mine of slice of life.