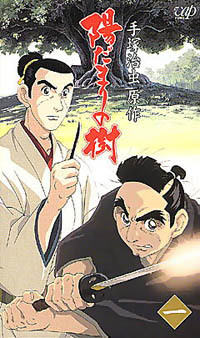 Shortly after watching the mediocrity that is 'Angolmois' I see 'Hidamari No Ki'- and find just what I was looking for in a historical fiction anime.

Adapted from a manga written in the early 80's by the 'God of Manga' Osamu Tezuka, 'Hidamari No Ki' takes place during the final years of the Tokugawa Shogunate, when Japan rapidly transitioned both politically and culturally from the medieval to the modern world. For an American example, you'd have to compare this era to the Civil War in the way it both defined and fundamentally changed the nation, and in the amount of weight it carries in the national consciousness. It's a period that has inspired countless fictional works, and in some respects 'Hidamari No Ki' is just bit too much like those other works. Anyone who has seen films like 'The Last Samurai' or 'When the Last Sword is Drawn' will recognize the tropes and themes at work here, particularly the tension between between affection for the 'old' Japan despite its flaws and the necessity and benefits of a 'new' Japan. This anime trods a well-worn path that prevents from breaking out and becoming truly its own thing, but it's still a well written historical drama.

Sound is OK. The OP is a piano piece with a somber gravitas that excellently conveys the tone of the series and sounds a bit like something out of 'Princess Mononoke', but both ED's are a bit of a miss. They both have this upbeat, late 90's sound that's just a mood-breaker. The Japanese voice acting is solid. The art, oh the ART. *This* is why I love animation from the last years of the cel era, when the artform had reached its peak, right before being swept away by the modern tide of digital animation (which is strangely similar to the STORY of 'Hidamari No Ki', but I digress). As a point of comparison between two historical fiction series, how is that this series is 20 years older than 'Angolmois' and made with less advanced technology- but still looks better? The backgrounds are gorgeous and detailed, characters are well designed and animated, multiple types of lighting are used which significantly change the color palette. I'd put this series up there with 'Cowboy Bebop' and 'The Vision of Escaflowne' in terms of just how good it looks.

In the evolution of a species it is not the strongest or fastest or largest members who have the best chance to survive, but those who are best able to adapt. This is a theme among all the characters- those stuck in a feudal era mindset don't do well in Japan's rapid transition. Sometimes it's gratifying and sometimes it's tragic but it's always consistent. The main characters do have a somewhat shopworn main 'schtick' - the carefree rule-breaker who needs to grow up a bit vs the uptight and overly serious stickler who needs to let loose a bit- but they do it well. Ibuya Manjiro is particularly compelling as we watch a genuinely good and upright man struggle between his convictions and a world that values those convictions less and less- will he find a way to make a honorable compromise with the modern world, or follow the traditional way of the samurai to the end? The character writing isn't perfect, there are one or two characters who are built-up but then quietly fade from the story with no real conclusion to their arcs. But 'Hidamari No Ki' still has solid, well-constructed characters.

A soundly written (if not *entirely* original) historical drama coupled with excellent animation. Historical fiction fans need to put this one on their shortlist of titles to watch

Hidden gem.  Why isn't this more popular?  Famous manga artist Osamu Tezuka based this on his ancestors and provides an extremely rare real life link to his subject matter.  This original, historical anime is so rich and deep, I can't believe I just discovered it in 2020. Very timely this year as it details cholera outbreaks and small pox vaccinations during the collapse of the shogunate.

When I chose to watch this anime by reading the synopsis, I was in assumption that this would be a normal anime. But as I started watching, episode by episode I was pulled into the world and emotionally invested with the characters and overall this turned out to be a great show for me.

Story: When we talk about the story of this anime, at the very crux this encompasses history at its setting, from the viewpoint of two main characters of this show, Ibuya Manjirou and Ryouan Tezuka. To be frank the whole story can be summarized with simple words, but the power lies in the way they have portrayed the sequences. There were many sequnces throughout the anime which were harsh, rough and also some simple moments which excellently captured my heart. The comical segments in this anime were purely brilliant and natural.

Characters: The main strength in this anime were the characters, the main characters around which the story progresses are Ibuya and Ryouan, who being youngsters were a part of important historical segment and their way of perception, action and reaction are are the combination of their wonderful characterization.

Sound: The magic of this anime is the music design. The anime starts with a peaceful OP which welcomes you into the world and the ED makes sure to bring your mind back to reality, which helps to appreciate the special moments and gives engaging time for you to ponder your thoughts regarding the characters and sequences at the end of each episode. And my most favorite music piece appears time to time in each episode in two cases:
1. At the conclusion of each episode where the narrator sums up the episode at the end just before ED starts.
2. At key emotional moments.
This music piece brought me serenity and made my heart light filled with emotion.

Overall this was a wonderful experience for me to watch Hidamri no Ki and this is a highly recommended to the following people,
1. Who love anime with historical setting.
2. Who love organically developed comic sequences rather than overly exaggerated funny pushovers.
3. Who love to invest time in those anime which exposes you to quirky characters who tuns to be a wonderful human as they grow, which eventually makes you to grow your emotions upon them.
4. Who love light-hearted emotional animes, which encourages you to introspect yourself and appreciate your life.

At the end, Hidamari no Ki is one of the special anime which was highly worth the time I spent with it and I really appreciate the blissful experience I received with it.