Alt title: Sound! Euphonium Movie 2: I want to resonate with you… 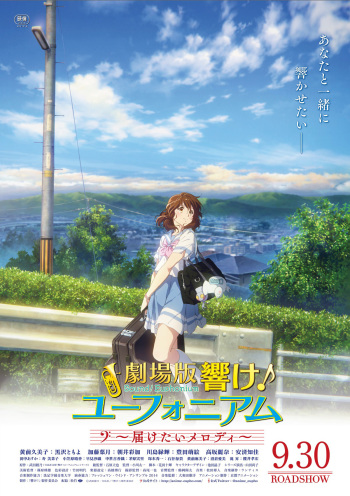 I know, I know.  I've heard it before.  Recap movie.  Waste of time.  You know how it will end.  Sage minds with the sincerest of opinions would suggest 'skip.'

When I reviewed the first Hibike! Euphonium Movie, I had one reason.  How to compare the contents of a movie version which uses approximately one-third the material ... how to compress and stay fresh.

With Hibike! Euphonium Movie 2: Todoketai Melody, I found a second reason for viewing.  From this point on, all continuations of the Sound! Euphonium franchise will be via the one-hour plus movie.  The third movie, Our Promise - A Brand New Day, came out in 2019, and two more are in production for the next two years.  We have to see how Kumiko and the gang fare in their high school years, and we want to see Kitauji High Wind Ensemble build on their first trip to Nationals.  At this point, there is no Sound! Euphonium Season Three on the horizon, so obviously, the movie strategy is Kyoto Animation's path to success with the band on the rise.

As to the reason of seeing how 312 minutes gets pounded down to 105 minutes for the movie-goer, the secret is ... focus.  We won't see Reina crush on Taki-sensei nor Kumiko's struggle with the difficult passage in the performance piece.  But it centers on the background to the title Sound! Euphonium, which was a piece for euphonium written long ago for Asuka to remember her father by.  Really we can reduce this to a tale of two dysfunctional families.  Kumiko is trying to understand Asuka-senpai.  The movie offers more details than the series.  Asuka receives a huge package from her father who left the household after a messy divorce.  It's the euphonium which Asuka falls in love with.  But her mother hates the memory of her marriage to a composer and wishes music to be banished from the home.  This makes Asuka's position on the wind ensemble tenuous.  She misses practices up to the time for the Nationals, but her pristine grades aids in securing her place in the band.  Music-haters repelled … play on!!!

The second arc deals with Kumiko's older sister Mamiko.  Kumiko had been following in her sister's footsteps to perform music.  But Mamiko was forced to quit wind ensemble for her college career.  In the last year of college, Mamiko announces that she wishes to become a beautician and scrap those college years for cosmetology school.   Furor twixt parents and daughter, and also sister and sister.  Kumiko confesses that her enjoyment of the euphonium was based on Mamiko's efforts on the trombone.  Friction leads to words regretted and one chance of preserving friendship ... if Mamiko can make Kumiko's performance at the Nationals (Shuichi's idea).

Both arcs interweave into a burst of emotions as each girl learns to understand her own emotions and the emotions of those held dear.

The project was a synthesis of scenes from the series (including all that sweat pouring off Taki-sensei in the performance at Nationals) and new material to fill out the plotline.  The new material did not have the same quality and sense for synchronization displayed in the series.  But the effects were stunning, from the reflections of Natsuki and Kumiko's conversation in the glass of a window to the brilliant glare of brass instruments resonating.  The music was taken from the second season, but the movie was smarter than the second season.  The themes of season two did not have the same acclaim as the first.  So, it was extremely intelligent of Kyoto Animation to roll the closing credits to the dynamic sounds of "Dream Solister."

That is really what the two recap movies to Hibike! Euphonium were all about.  Intelligent retellings of stories that were powerful in themselves, but magnified by cutting out the superfluous to gain a distilled better performance called the 'compilation movie.'

It creates the desire to see all the remaining Sound! Euphonium movies.  Intelligent!