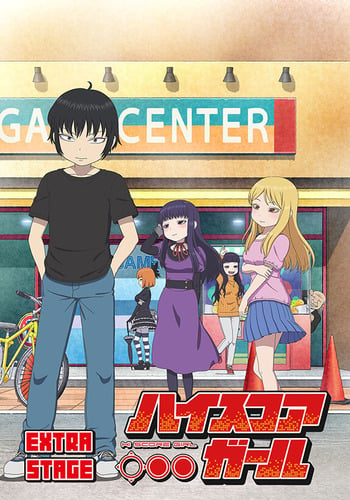 It is kind of weird to have these 3 episodes as an OVA since they really feel like the season finale. Koharu get her chance to play against Haruo for a date, Oono walks back into the story as if she had never left and Haruo is is starting to show more feelings.

So make sure you watch this after the first 12 episodes before you get started on season 2 when it comes out!

I'm pretty tired i won't lie, and i watched this ages ago but its a REALLY GOOD ANIME. you should totally watch it if you are interested in the history of video games, or just video games in itself followed by a mild love story. Its really entertaining and i really enjoyed watching it. Storywise is amazing, clear and followed through. Not too many fillers. Sound is good nothing amazing, but still good. And the characters were all well planned out. Solid 8.5 out of 10 for me. Wouldn't watch again because there is no way im forgetting this anime!

The only rational for these episodes being an OVA is that the show was canceled, and then uncanceled in a matter of weeks.

Our first season ended with an ultimatum, where Hidaka challenged Yaguchi to a rematch, and if she beat him they’d get to date, but if she lost she’d drop the subject. Somehow this became a strange OVA trio, where if the viewer didn’t realize these existed they’d go into a second season completely blind.

In the three episodes we didn’t get much of a story, once again Oono is scolded by her tutor and banned from going out or playing video games, though she gets one final day out with Yaguchi that basically mimics the episodes where she ran away.

In the middle episode we finally get the showdown between Hidaka and Yaguchi, which mostly focuses on the lengths Hidaka went to in order to become better. They did a good job of really making their duels seem like an anticipated sporting event, where you really don’t know what’s going to happen. Unfortunatly in the episode’s conclusion they did a lot to burn down these characters you’ve spent the last few hours learning to love, instead making them all seem like jerks.

The final installment was an episode that really did a decent job of melding the video game aspect of this series with elements from a more traditional drama series. Instead of someone making their love a cake or a beautiful painting, Yaguchi does what he does best, makes Oono a custom RPG for her to enjoy. Oono responds to this gesture by doing what she does best, using Yaguchi to get what she wants, namely a ticket to the big video game convention in town.

These stories weren’t bad, but most of it felt unneeded, outside of the second episode. As much as I enjoyed some of the scenes within the series involving the gameplay and explanation of different video games, I think these side stories could have been squeezed in there to much greater effect.

I feel like all the characters lost a step in these episodes. Yaguchi starts to act even more like a blind jerk towards Hidaka, Oono is her usual psychopathic and selfish self, and even Hidaka becomes an obsessive nut job who is most likely going to boil Yaguchi’s NeoGeo in the upcoming season.

Two of the three episodes come across as what you would normally find in an OVA listing, basically fun throw away episodes that don’t have much impact on the series, though I guess the introduction of Oono’s older sister, or the loosening of the reigns by Ms. Moemi may effect the second season. But having that middle episode here just doesn’t fit, as it’s important to the story and should have been either the finale to season one, or the start of season two. Instead this comes across as the creators dropping these out there on their own, hoping viewers don’t forget the series during it’s extended hiatus.