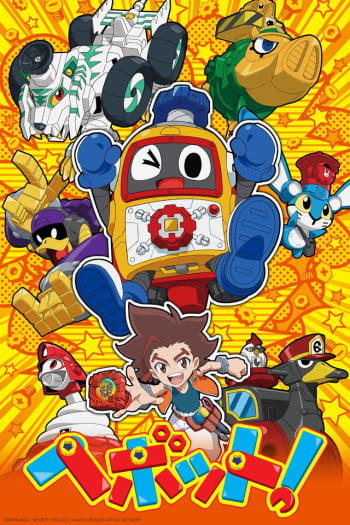 A baseball team comprised of futuristic robot cats and a human make their way towards becoming a great team.

Nobita is dumb, lazy, and slow, and as a result of his lack of motivation, any future generations in his bloodline are cursed with poverty! Therefore, to help him in his path to succeed, his great-great-great-great grandson visits him from the 22nd century to give him a gift: a blue mechanical cat named Doraemon who has a 4th-Dimensional pocket full of strange gadgets. Unfortunately, Doraemon's talents are inevitably misused for such things as peeping, practical jokes, and general tomfoolery. Can Nobita save his successors, or is he doomed to stay a loser forever?

The age of the maid robot has begun! Now, each family has at least one maid robot in their household, and Souta's family is no exception. Souta grew up with his maid robot since he was a young boy. He has learned that there are people out there that have fallen in love with their maid robot, but he is determined to not be one of those people. His maid robot, Tsukushi, will do whatever it takes to make her master happy!