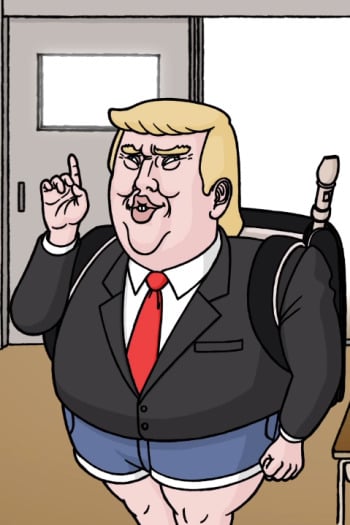 Don't get me wrong, the animation, art, story, etc are all god awful but it's intentionally bad. It was created with the intention of being the most god awful anime to ever grace the earth, much like trump being the most god awful person on earth. If this anime were trying to be good but ended up being bad I'd judge it a lot more harshly but it's self aware of how awful it is and that gives it an 8/10 in my eyes

Everything: A series that was too good to last. We only got two episodes of one of the most dank ass series released in 2017. President Trump spitting hot rhymes as an elementary school student, showing up all those punk ass little shits and acting like a baller in every day of the school year. Class introductions, he practically smacks the taste out of the teacher's mouth with some Taco Bell bombs and in Gym Class, he uses those pull-up bars like an acrobatic circus chimp, swinging so hard his clothes fly off. Bitches ain't got shit on President Trump.

By the time you get to this part, you could have watched the series in it's two-episode glory; only two episodes because any more and it would have caused the mass decline of anime in 2017 as anything else released after it or during it would look like pure and utter dog shit to the buttery smooth animation, pimp ass voice work, intricate plot and highly detailed characters that must be an accurate represenation of American politics as seen through the eyes of the Rising Sun.

Anime of the Year winner, also the winner of best sound, music, animation, plot, characters, settings, best male character, comedy, slice of life and any other awards it can qualify for.

Everything about this anime, if you can call it that, is absolutely aweful. But so isn't Trump, so I feel like that's the spirit they were going for. Overall, I would like to see a little more animating, but as Trump is a disgusting troll creature, this anime really captures that spirit. 9/10.

Funny anime. Story, sound and characters are okay but the animation isn't that good. But at least we got one! It would have been more fun if Hillary or Obama were in it. After reading the feedback on different platforms, I came to realize that my notion was correct. These western conservatives are no less sensitive than their liberals. Oh! I forgot the western conservatives who fund NGOs worldwide to spread liberalism and feminism to the non-white countries.