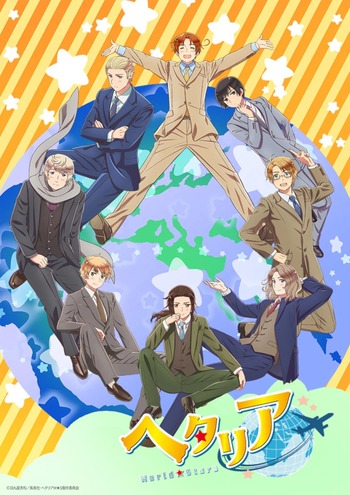 Keshikasu-kun is a gag comedy manga about anthropomorphic stationery. The main character is an egotistic eraser, "Keshikasu", who aims to be the undisputed idol of the stationery world. He fights against other stationery items, erasing a mechanical pencil here or getting defeated by a permanent marker there.

There are saints living in Tokyo, Japan: Buddha the Enlightened One and Jesus, Son of God. After successfully bringing the previous century to a close, the two share an apartment in Tachikawa while enjoying some well-earned time off down on Earth. Buddha pinches pennies like a typical neighborhood housewife, while Jesus is prone to making impulse buys. Read all about the saintliest duo’s carefree days in Tachikawa …

Japanese Hell consists of 272 subdivisions, and the demon Hozuki is tasked with making sure they all run smoothly. Calm and level-headed, he efficiently navigates Hell's internal affairs while his boss, the Great King Enma, is busy judging the dead. Although Hozuki has a soft spot for cute animals and is known for his love of gardening Goldfish Flowers, he's certainly no pushover. This demonic bureaucrat has a mile-wide sadistic streak that keeps his subordinates and even King Enma himself in check. Is Hozuki's iron will - and iron club - enough to keep the afterlife running smoothly?

Japan, the most powerful country on Earth, is ruled by a system described as the evolution of capitalism: the National Quiz! This bombastic game show airs each night, and thousands of citizens from around the country eagerly wish to participate. Those who win have a single wish granted by the Japanese government, from a cure for leukemia to even the capture of the Loch Ness Monster, while losers are branded as war criminals and severely punished. However, while many dream of playing the National Quiz, not everybody is happy with this institutionalized free-for-all. The Hardcore Sect of the United Anti-National Quiz Front is armed and furious at the Quiz’s questionable ethics, and will do anything in their power to take out its flamboyant host, K-i K-ichi!