Alt title: Hetalia: The Beautiful World - I Was Overwhelmed by Heroines 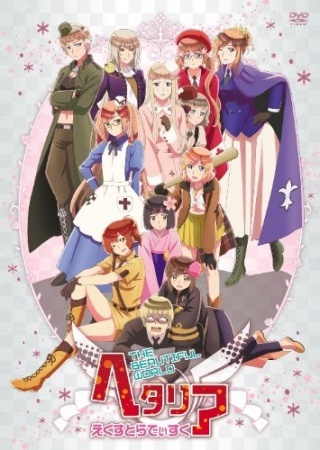 If you're looking for manga similar to Hetalia: The Beautiful World Extra Disc, you might like these titles.

Japan, the most powerful country on Earth, is ruled by a system described as the evolution of capitalism: the National Quiz! This bombastic game show airs each night, and thousands of citizens from around the country eagerly wish to participate. Those who win have a single wish granted by the Japanese government, from a cure for leukemia to even the capture of the Loch Ness Monster, while losers are branded as war criminals and severely punished. However, while many dream of playing the National Quiz, not everybody is happy with this institutionalized free-for-all. The Hardcore Sect of the United Anti-National Quiz Front is armed and furious at the Quiz’s questionable ethics, and will do anything in their power to take out its flamboyant host, K-i K-ichi!

Overlord is back with a humorous four-panel twist that'll have you rolling on the floor! Featuring the Great Tomb of Nazarick and your favorite characters, Overlord guru and extraordinaire Juuami is here with a new spin-off of the super-popular series!

"We can see spirits and hear the inner thoughts of others. We were born atop auspicious clouds and are truly the Son of Heaven. We will definitely refuse to ""go die!"" However, we were harmed by an evil-doer and turned into a girl! We don't have our power-ups anymore -- fine! But to that parasite staying in our magnificent body: could you stop only thinking about losing weight?! You're just being mean at this point! Who knows what kind of hilarious events can unfold when two people who have never met each other end up switching bodies?! Please -- enjoy the show!"

Follows Tatsuya Aoyagi, a tough teacher who transfers to Cromartie High School with the intention of pounding some learning into the students' heads.

Keshikasu-kun is a gag comedy manga about anthropomorphic stationery. The main character is an egotistic eraser, "Keshikasu", who aims to be the undisputed idol of the stationery world. He fights against other stationery items, erasing a mechanical pencil here or getting defeated by a permanent marker there.