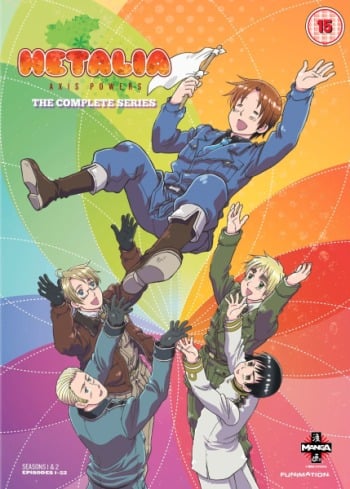 Hetalia is a moe-style comedy series that has a very shallow and twisted outlook to its main topic of world history and politics.

As someone who actually cares about history and the human condition that influences what countries and people have done throughout time, I found Hetalia's representation of basically every single thing lacking and shown in a dangerously glorified and sentimental fashion. The style of simplification employed by the series is not one that removes everything extra to preserve the relevant core: instead, it disposes of all substance and deals out half-assed references that often miss the point of the real history and reasons behind them.

I shudder to think that someone might consider Hetalia educational by virtue of its subject matter. If you don't have prior knowledge about something it portrays, all you're left with is a near-unidentifiable mockery completely mangled and disfigured for the sake of cute delivery or some unfunny and shallow joke. The series is more likely to mess up your perspective than help build a realistic understanding of anything. I suspect that Hetalia is especially liable to fuel infantile nationalism and a misguided tendency to see interactions and ethics between nations similarly as between human individuals.

If you want to see a parody starring anthropomorphized countries, the webcomic Scandinavia and the World does it with much more substance and better comedy, and more responsibly might I add.

For me, Hetalia was very lame and unentertaining in its content and delivery, and overall it was very annoying to watch.

WARNING: This anime is highly awesome, watch at your own risk

Hilarious, brilliant and educational(?), Hetalia is amazing. The characters are all countries, and are complete stereotypes: America loves hamburgers, England is a terrible cook etc. The story is about various moments in history, although initially it is centred around WW2, as well as having some random episodes that have absolutely nothing to do with anything but are hilarious nonetheless.

Hetalia is basically the best, most hilarious history lesson you will ever have (although most of the stuff you learn is pretty useless...), and afterwards you will never look at the countries or history the same again.

I would recommend this especially to anyone who likes comedy or history, but it has something for everyone. If nothing else, just watch it to see how awesome your own country is (mine has the best eyebrows ever and is friends with a flying mint bunny. Who could ask for more?)

A review and watching five years in the making...

So...been hearing about Hetalia pretty much since it came out - and have seen quite a bit of merchandise made for the series as well. When it was finally discovered on this streaming site, it was a sure-fire watch...

The "plot" of the show is pretty simple - you have the stereotypes of the different nations of the world (Latvia, Estonia, Lichtenstein, the U.S., Russia, and so on) doing random stuff with history thrown in. For example, one episode told about the Mongol invasions of Russia during that nation's infancy (which later turns into the joke of why Russia is so psychotic). It is episodic, but the antics tend to make each five minute episode go fast - and you are bound to at least laugh once or twice during the series' run.

The music for the series is heavily catchy; the first ending song alone is enough to worm its way into your head. Let alone the second! But otherwise, the music is classical/instrumental in nature. This adds to the effect without subtracting for the most part. The same can be said for the animation; it is rather cutesy and heartwaring, especially the "chibi" add-ins that are done now and then.

In all, it's a decent comedy involving stereotyped versions of the world's nations all wrapped up in a cutesy package.

I’ll admit I wasn’t sure about Hetalia at first. It seemed nonsensical and very strange during the first two episodes and I could not keep up, but the thought of dropping it so early on never even crossed my mind because already the characters were growing on me.

And thank goodness I carried on, because this has been one of the best, funniest and most entertaining anime I have seen this year, and probably in the few months before that as well. Hetalia has an air about it you just won’t find anywhere else. After seeing a friend of mine - he’s very passionate about the history of all the countries represented in this show, mind you - blog about this everyday, I figured I had to check it out at some point. And I think I enjoyed it at least four times more than I thought I would.

If I was to rate its originality, it would easily be a 10. I love this concept of every character being a personification of a country, having their own unique personality to match, and all these different quirks and interests that had me watching and watching. I just really needed to see what the heck they’d end up doing next. Every episode was its own little scenario and short story, and whilst there is a slight sense of actual development and an order in which everything comes together, having the episodes as five minute shorts made the series just that much more enjoyable and suitable for a genre such as this one. It manages to flow perfectly and not come across as rushed at all despite everything progressing so quickly. I’d only give the plot a mediocre rating because, let’s be real, Hetalia really doesn’t have that much of a plot. But the story - the story is a different matter, and I think as a piece of fiction it deserves a lot of praise because I could tell from watching it that a lot of thought went into it.

Hetalia’s animation may just be one of the most iconic I have ever seen. It’s just so different, recognisable, and atypical. Very good, in my opinion. It’s really made the art style its own, and that’s something I can always appreciate with anime and manga. Hetalia has something comical and charming about its animation that really fits with the theme overall, particularly those cute little blush marks on everyone’s cheeks and the dreamy eyes. The colour scheme was pretty good too, very light and soft and colourful. The visuals turn a unique and innovative show into something even more original and iconic, something any avid anime or manga fan could recognise from a mile off.

The voice acting is just so so good (I have only seen English subbed, so I can only comment on this). Oh, gosh, Italy’s voice though! He sounds so precious, sweet and adorable! Everyone’s voice matches each character so well that I just can’t even. Every character - ahem, every country - is personified flawlessly in this aspect. Each one had the exact voice I’d expect and I just loved it. And the soundtrack! The ending theme is so cute and hilarious and addictive and embarrassing all at the same time! I adore this series’ soundtrack and voice acting. It’s truly spot on for a series like this.

The characters are extremely diverse. Every single one is different from the rest. They each stand out as their own person, and what I really like is that they don’t succumb to the awful cookie-cutter behaviours that so many anime seem to fall into. Sure, there’s your tsundere and your cutesy sweet guy and the quiet dark-haired handsome guy (I’m looking at you, Japan), but the way they are written is just different from other series. These characters are genuinely funny, loveable, and best of all they don’t make me facepalm like many anime personalities make me do. These guys are honestly so fun to watch, and I adore them as though they were my own characters.

I would just like to comment on the overall enjoyment I got out of this. If I was to rate how enjoyable this is, it would easily score an 8/10, and to me, a show being enjoyable is its most important aspect, so that’s what I’m giving it overall. I got to the point where I was watching 20+ episodes in one sitting. I truly, honestly got hooked, and that’s one of the reasons I’d recommend it. It may not seem all that impressive judging from the first episode or two or the overall star ratings on here, but I would definitely recommend giving it a try at least. It got several genuine laughs out of me, and provided me with hours of true entertainment.

I've finished seasons 1-3 and am currently waiting for my mom to agree to get me season 4 and 5 but Idk if she will, if you wanna learn about the history of many different countries while laughing your behind off I'd suggest this anime! But it is stereotypical so be aware of that xD