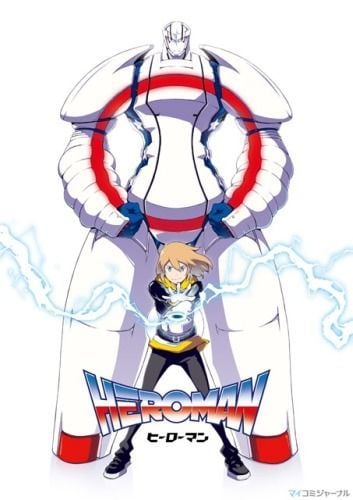 Poor, short, and unathletic Joey Jones has always been picked on by the rich kids at his school. But when a lightning bolt turns a toy robot he salvaged from the trash into a hulking, remote-controlled bruiser, Joey becomes the only thing standing between humanity and a terrifying race of alien invaders, The Skrugg. If he's going to save the world, however, he's going to need the help of his friends Psy, Lina, and Professor Denton, along with more courage than he ever knew he had.

Story Heroman's story really isn't anything never before seen.  In fact, it lines up with most shounen anime.  Joey, our hero, is a young boy living in the USA.  He gets picked on and bullied and considers himself to be very weak.  Well, he comes into a great power when his self-repaired Heybo is struck by lightening, turning it into a giant robot with the American flag running down its side.  This is Heroman.  Together Joey and Heroman, with the constant support of their friends, are tasked with defending the world from the Skrugg.  The Skrugg are an alien lifeform hellbent on destroying the planet.  There's really nothing amazing about this story despite Stan Lee's influence in it.  But regardless, this anime is somewhat inspiring and it's not the overall story that makes it so wonderfull.  It's all of the little stories that are happening behind the scenes.  Like the story of Joey and his father.  The plot behind Lina's brother was also very good, even though it went a little underplayed. Animation The animation is fantastic.  I really liked the character designs and how the world was drawn. The colors were lush and were appropriate for the series.  Everything moved fluidly.  This anime is gorgeous.  The Skrugg were unique and every battle was a sight to behold. Sound I really liked the voice acting in Heroman.  I could feel the sincerity in the character's voices and it really drew me closer to the characters.  The voice acting in this anime is truly top notch.  I also enjoyed the two seperate opening and ending themes as well.  Episode one through twelve contained "Roulette" by Tetsuya from L'Arc-En-Ciel and the ending was called "Calling" by Flow.  Episodes thirteen through twenty-six contained "Missing" by Kylee and"My Hands For You" by Mass Alert as the ending theme.  I especially liked "My Hands For You." Characters I'm very picky with the characters in my animes.  If an anime doesn't have believable characters than I'll typically lose interest.  I'm happy to report that I loved the characters in Heroman.  Joey is such a sincere kid and he truly is a hero.  He's such a loveable character the way he tries to help everyone and you can tell he has a soft heart.  His relationship with Lina was also enjoyable to watch as the two became closer and closer throughout the series.  Psy, Joey's best friend, was always encouraging and never backed away from Joey's side.  Professor Denton was an interesting character as well.  There was character development for all of the main characters throughout the series, including Heroman!  The characters here really make this anime shine Overall This was a great anime and I enjoyed watching it very much.  But, then again, I had a feeling I'd like it as I'm a sucker for Stan Lee's creations.  This isn't just a child's action anime.  There's a lot of character development and although the story isn't anything brilliant its still incredibly entertaining.

Story Nice, predictable in places but there are some very nice touches. Considering how much Stan Lee has done it's only fair that he borrows from. Heroman is a safe adventure into anime.    Animation Very clean and crisp. Heroman is animated extremely well. There is good attention to detail and the animation is very smooth.  Sound The music is average. The voices on the other hand are good, but the main characters voice is very very annoying. I watched the subbed version of this anime, which is uncommon for me but the voice actor playing Joey reinforced why I watch dubbed anime. The woman doing his voice threw me completely at the start, and by the end after all the 'Heroman Engage' it was driving me up the wall.  Characters These are done really well and you will grow to really like some. A little more could have been done here though. The anti-hero element was not really explored to its fullest. The characters are good for what it is, a childrens cartoon. Overall Good – a nice Stan Lee creation. It has the feel of a cartoon not an anime, if that makes sense. A little on the safe, boring side 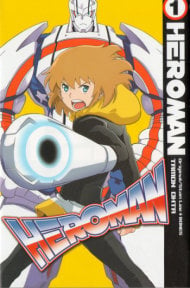