Hensuki: Are you willing to fall in love with a pervert, as long as she’s a cutie? - Recommendations 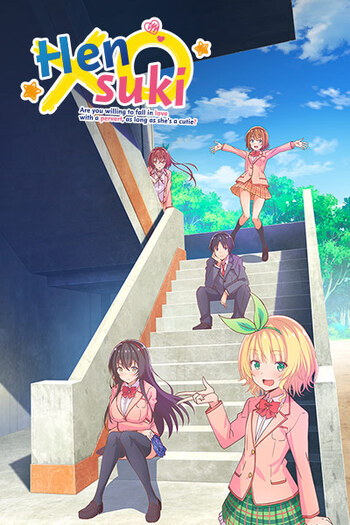 If you're looking for anime similar to Hensuki: Are you willing to fall in love with a pervert, as long as she’s a cutie?, you might like these titles.

Both are very fun school life/school club/romcom/harem type anime. Bokuben is super wholesome and feels a little less chaotic in terms of pacing and character building. Hensuki is the more pervy ecchi oriented anime but has the same vibes especially since Bokuben just aired last season so it should be prettty fresh in the minds of fans

Both are harems that feature drastically different girls with their own kinks. While Oreshura is more fantasy based and Hensuki is more... sexual. Hensuki reminded me a lot of Oreshura while watching it, especially the final episodes where they both have a beach/pool set love confession competition.

Both anime are funny Harem anime surrounded by crazy females who are trying to get the guy's attention. The comedy is fairly similar in both and they both have a great ending! Highly recommended if you like comedy harem anime that have crazy female protags.

NAKAIMO: My little sister is among them!

Both are ecchi-filled harem comedies with a mystery subplot. In Nakaimo the protag is trying to figure out which of the girls is his half-sibling, while in Hensuki the goal is to find out who left an anonymous confession. In both the quest leads to some surprising discoveries about the girls, which results in a string of comical and awkward situations that follow.

Both are lewd/sexed up comedies in which the male lead is "normal" while all/most of the females around him are perverts giving him a hard time. Hensuki has actual romance in it, whereas Seitokai Yakuindomo is a pure gagfest.