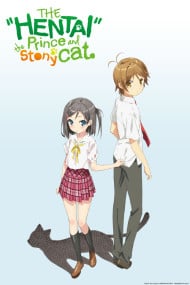 I actually can't remember how I came upon this anime, or what motivated me to give it a try. The title of the show alone is enough to create a questionable first impression. However, I'm glad I ignored my unfounded initial misgivings, because, despite its flaws, this series delivers entertainment where it counts. The story centers on Youto, a second year high schooler who is introduced as a typical male teen driven by his insatiable hormones. In an effort to improve his abilities to win over girls, he visits a mysterious statue of a cat god that is purported to grant wishes. It also happens that Tsukiko, a young girl who feels that her personality is too emotional, is also there to make a wish. Together, the two teens make their wish, the resulting outcome sets off a chain of unexpected events that unfold throughout the series. The most notable outcome is Tsukiko losing her ability to express emotions, particularly through her face and voice. In an effort to undo their wishes, Youto and Tsukiko are caught up in the chaos created by subsequent wishes granted by the cat god. What I found surprising about this show is that despite the seemingly shallow premise, the story rises above the simple mechanics of the classic wish fulfilling fantasy and delivers a tale where the characters are developed in a meaningful way. The flip side of this is that the show sometimes suffers from identity crisis. On one hand, it often wants to be a romantic comedy with a liberal sprinkling of naughty slaptick thrown in for good measure. But despite giving a cursory nod to 'hentai' in its title, the series makes a commendable effort to take the two protagonists beyond their initial basic character designs. As we learn more about Youto and Tsukiko, we realize there's more to them than the stereotypical hormone-driven teen and the expressionless girl, character types often seen in other shows. Along with the two leads, the rest of the characters in the show are also very likeable, although the side characters play smaller roles for the most part. One reason for this is that show attempts to cover a lot of ground in 12 episodes. In such a short time frame, several sub arcs are delivered with mixed results. The middle third is probably the weakest, with some plot lines that were confusing and difficult to follow. This is one show I would like to see a second season for, as many of the secondary characters deserved more of the spotlight for further development. As it is with themes involving the granting of wishes, the propensity for gaping plot holes and logistical inconsistencies is always present, and this show has its fair share. However, by the time we reach the conclusion, most questions that have been left dangling are answered, leaving only a few loose threads. In many ways, I enjoyed this show for its ambition. It may have been a marketing attempt to draw in an audience with its surface appearance of fluff and implied lewdness, but to its credit, it's more than just a teen comedy. The characters manage to grow over a short time span and you can empathize with their struggle to come to grips with their relationships and the mysterious memories of a past that defines who they are. Although some of the humour can be juvenile and usually uncalled for, for the most part, I appreciated the lighter moments. Along with the solid storyline, the animation and visual design of the characters is excellent. There isn't a significant amount of action sequences or special effects, but the animation is effective and appropriate. The character designs stood out for me immediately. It's a style that I found visually crisp and nearly flawless in execution. I can't comment on the Japanese voice acting, but I found the voices to be pleasing, and they matched the personalities of the characters. Tsukiko's character was stood out, and was expressed (pun intended) well. There isn't much else to comment on in regards to the audio. It's not memorable, but get's the job done. The opening and ending songs are quite catchy, though, and will likely be stuck in my head for a longer duration than many other show songs I've heard this year. It's hard to go into a show like this without preconceived notions, but its efforts to deliver more than the usual romantic comedy standards are not wasted. While far from perfect, this show left me wishing for more, in a good way.

***This review might contain very light spoilers*** I do not care what everyone might think of this anime; yes it is a no nonsense comedy and yes the main character is a huge perve but despite all of this there are many heartfelt and amazing scenes inside this 2013 anime. Story: 6/10 Hentai Ouji to Warawanai Neko is a story about cat gods that make wishes and the unseen consequences of said wishes. The story follows Youto who is for all intents and purposes a huge pervert with a heart full of gold (and most likely blood too). He ends up becoming the reason Tsukiko, the younger Tsutsukakushi sister loses her ability to show emotion. Along with her older sister Tsukushi and an annoying blonde ditz Azusa, they all go through different trials and events due to the cat gods wishing powers. So first off; this is a harem. If you do not like harems then leave now you will not like this show. For you who are still here, there are many great things this show accomplishes. First while this is a fanservice heavyish anime, pretty much everything is tied to a gag. Youto gets into many different situations because like 99.9% of the boys his age, he is a perve. All of these scenes (and believe me there are tons) are so funny and yes I actually did “laugh out loud” during many moments of the show. The scenes with Tsukiko are especially funny since even when she is extremely embarrassed, her monotone, no expression acting makes it so much funnier. It is a really funny show take my word for it. What the show ended up lacking on is what shows in this genre usually end up doing; leaving out important information and having excessive plot holes. A large amount of information seems to be pulled out of nowhere or just not looked into enough. It just seemed a little off putting when a character would bring up something like it’s common knowledge in the show but you cannot remember when (or even if) it was brought up. Also there will be large amounts of time where a main character will just up and disappear without any notice for three or so episodes. Now pertaining to the actual plot of the show, you can kind of split this show up into three or so parts. Essentially we start with the whole Tsukiko emotionless thing but then later on you are introduced to Azusa who ends up wishing for stuff. So essentially as the show progresses you will see Youto have to deal with various issues with various individuals. Everything seems to flow quite nicely EXCEPT the last sort of story arc (I guess the last four or so episodes). Everything begins to rush to a certain point of the plot and I feel as if some more time was needed. I do have to say that the final episode was very enjoyable as we FINALLY got to see some back story for Youto. Overall the story is passable and enjoyable even if the show suffers from pacing issues towards the end. Animation: 8.8/10 The animation in this show is really good thanks to the character models, lighting, AND THE EYES (I’m a weirdo). Each character is very detailed and has a constant quality throughout the entire season. Also the eyes are extremely well done. There are many scenes where characters will seem more believable just because of how they are looking towards each other (eyes are important man). The color palette was pretty good in my opinion; nothing looked bland and the backgrounds were pretty good. Sound: 7.5/10 The main star focus of the sound in this anime are the voice actors. Even though Tsukiko was monotone for like 95% of the show, just the way her voice actor presented herself with the different mannerisms made her character’s performance much more believable. The rest of the cast also did a great job especially Youto. As for the soundtrack for the anime, all I can say is that it was pretty average. Other than the really catchy opening song, everything else was there but just not over the top awesome. Characters: 8/10 The only thing really holding me back from giving this show a close to perfect score on the character section is Azusa. She was by far the most annoying female character of this season (yes even more than Tohka from Date a Live). That being said, the rest of the cast did an amazing job providing us with some very interesting scenes.  The chemistry between Youto and Tsukiko is awesome to see unfold throughout the entire season as they do become closer and closer. Also due to some certain events later on in the show, Youto somehow gets on Tsukushi’s good side which makes things even more interesting later on with all three main females gunning for Youto. Most of the characters get pretty extensive character development so yeah overall this anime did a great job presenting us with interesting characters (fu#@ Azusa though…annoying b!%ch). Overall: 7.6/10 This show was a real shocker for me. When I saw “hentai” in the title for the show, I automatically assumed it was going to be a stupid ecchi anime. What I found out after twelve episodes was that masked in this gag comedy anime, there are some really cute, interesting, and serious moments that I will remember for the years to come. I strongly encourage you take the time to sit through this show. You will be too busy laughing your ass off to point out the plot holes. Enjoyment: 9/10 Thanks for reading my review! If you liked my writing style, would like to see some other reviews, or just want to talk, please stop by my page! Sincerely, Awesome Drummer

I read the first volume of the manga, then jumped into the anime. Despite what the opening and ending music might have you think after the first 3 episodes, this anime's story really throws you for a loop.It goes from being a buddy adventure to restore something wished away, to a mystery filled with twists and turns with feelings that really drive deep.My only real dislike is the opening and ending music. Other than that, the ending was mostly satisfying, love the characters, beautiful animation.Definitely a recommended watch. 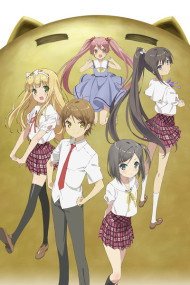 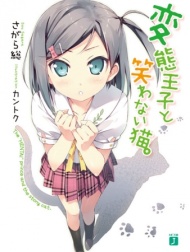 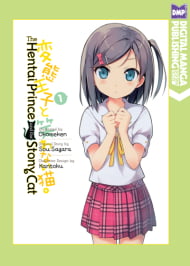 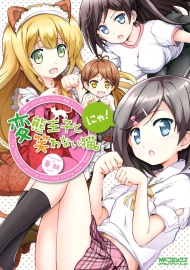