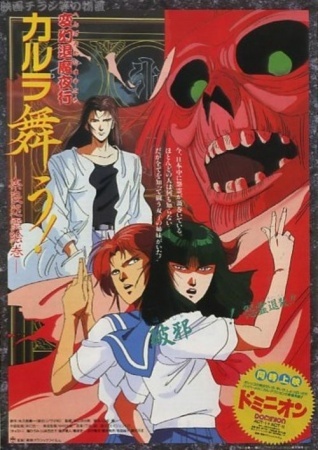 Ah yes, occult horror anime from the 1980s. Typically I'm pretty open-minded when it comes to old anime, but how good is the story to Hengentai Mayakou Karura Mau! Nara Onryou Emaki? (Or by its literal name, Transformation Repel Evil Night Travel Karura Dances!) If I'm being honest, I don't think I enjoyed it very much, mainly for two major reasons:

The director for the movie, Takaaki Ishiyama, hasn't really directed any memorable anime. Other than video game adaptions, some not so great Madhouse originals, and those Happy Science anime that help promote a religious cult. Needless to say, this director has an odd history.

There's also the fact that the movie partially adapts a manga that is 18 volumes long. https://www.mangaupdates.com/series.html?id=158307 So unless you're planning on seeing a complete adaption, you in for some disappointment. There's also a six ova series, but who knows when they'll see the light of day.

Story- The story is about two sisters, Shoko and Maiko Oghi, two teenagers who are also exorcists, who are transfered to a high school in Nara to investigate the situation, in what happens to be their first real job. The Ikeda family is victim of a terrible curse. The patriarch of the Ikeda, a renowned and respected assemblyman, died in a horrible (and very graphic) way, at the hands of evil spirits. Now, the rest of the family is in danger...

The story of Karura Mau is about the characters stopping an occult group that are using ghosts to commit murder for political and economical gain.

Animation- The animation has actually aged pretty well. The characters, while pretty common, are quite detailed and well made (at least, most of the time: there are some close-ups that look terrible... Shoko is a special victim of this). Even the minor characters are well crafted. Not to mention the spirits, they're really diverse, ranging from grotesque, frightening, imponent and sometime majestic, and all of them following a traditional Japanese theme (specifically, from the Nara period). The action take place in various places such as schools, old houses, businesses or temples, and all are well worked. The fights are dynamic and fast, and deaths, which are many (though not as many as one would hope) and full of blood and several limbs.

Sound- The sound is as correct as the animation (if not better). All the seiyus do a good job, especially Maiko's actor, who gives her a light-hearted and carefree voice. Music is varied, and accompanies the various situations (ranging from studying at a classroom to battle shinto monks) properly.

Characters- The characters start off the same and they stay the same, for the most part throughout the movie. Mai, the younger sister, is joyful and carefree. While Shoko, the older one, is more reserved and serious. And that is pretty much their character throughout the movie, so don't expect any character growth with those two. The side characters are not much different, including Nishikiori, and also Ohmi Ikeda.

Overall- If you're watching it solely for the fights, then there's a possibility you can get enjoyment from the movie if your expectations aren't too high. The clashes are frontal and dynamic, and since various characters have different skills (that varies from sealing, vanishing, gunfight or even ninjitsu), the fights tend to be diverse and very attractive. It relies on traditional Japanese occult themes to stand out, but I don't think its the first to attempt it.

Can't really say I'm a fan of the movie, if I don't like the characters then what's the point. The credits song by Linda Hennrick does sound nice though.

If you must have a taste of an anime that has supernatural horror elements, then series I would recommend would be Yu Yu Hakusho and Devilman Crybaby.