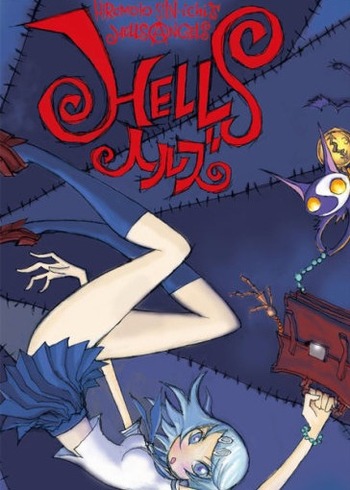 Okay, so I randomly came across this movie off of Amazon prime video (lol) and decided to give it a watch. And when I tell you it's worth it. The animation is very unique (I got major soul eater vibes, but a tad zanier much like devil crybaby -I'm sorry I don't know if this is the actually title) but anyways the story was very unique and and intriguing, the main character has a torhu from fruits basket vibes and is almost as clueless as the viewer watching. Overall this movie was very good in my opinion, being a  mix of genres but left you with a feel good type vibe. This would have been a very cool anime, if it picked up following the conclusion of the movie.

Hell’s Angels anime movie review: This movie is about 2 hours long and the translation I had was fan subbed, and it was not perfect, let’s put it that way. I really wanted to see this movie and I had high hopes for it. But that was dashed after I saw it. I’ll start with the basics…. (There will be spoilers.) Animation: The animation is the best part of this movie. The animation doesn’t follow the normal rules of anime. The way that it is done is more of a Western style and mixes elements of Tim Burton’s style, most notably from A Nightmare Before Christmas. This type of Gothic style of animation is fairly rare by anime standards. There’s a lot of greys, blacks, whites, and the most prominent color, especially towards the end, is blue. I really enjoyed it. 9/10 Music: The music is good. Really good. As to be expected there is some rock music, but they had also incorporated some other styles. The ending theme song is marvelous and not what you would expect from Japanese animation. The music is has different songs from different genres and it ends up sounding more like a Hollywood movie soundtrack than an anime soundtrack. 8/10 Story: This is where we got complicated. There are many things in this movie that are typical anime tropes. They include the senpai character a lot of the girls at school are in love with. (And maybe the main character?) The first half of the story is a faster paced version of school anime with supernatural characters and some dark secret that the principle is hiding. The middle starts throwing all those typical anime story twists that were made when you’re building the series slowly. Since this movie is so fast paced, there’s no emotional attachment to the twists rather the audience feels indifferent to them. They aren’t anything special, either. They’re, I wouldn’t say predicable, but I would say they’ve been done a lot before. That’s part of their tropes. The ending left me uninterested and I found myself yawning, inbetween times. The latter half of the movie is filled with this “believing” crap I felt like I was watching some hippie movie. In fact this was disappointing and so was the ending, which anyone could predict, and was filled with happy, fluffy tripe. It doesn’t help when they switch from a biblical theme to mixing some Eastern traditions in there. I’ll admit, I wasn’t expecting such a Gothic looking anime to turn out so light and fluffy, but I was very disappointed by it because I expected more…. bite. (Particularly, since it’s obvious it’s taking a lot from Tim Burton’s movies.) The story was convoluted because of the fast paced that a casual viewer of anime probably couldn’t follow most of it. If this had been an episodic anime, instead of a 2 hour movie, this would have been a much, much better anime. But instead, cramming all that story and character development in a short time period with no filler doesn’t actually do well as many would think. The characters.. Well, while some of the characters develop, the only one worth emotionally attaching to is probably the main character. Since the movie is so fast paced you don’t get the good feel of the characters and you don’t get to be emotionally attached to many of them. Rather, you face detachment which will leave you hanging at the end. There was a lot of characters who deserved more screentime and development. One of them was the main “bad guy” if you will, as depicted above, who goes by the clever name of Helvis. (It really is clever, you have to admit.) Unfortunaley, his character is side stepped for other characters who just aren’t as interesting. (Abel comes to mind.) Bottom line is this movie and the characters deserved a slower pace and better writing. (Maybe in the form of episodes?) Since they were crammed into a two hour fast paced movie, they suffered in inexplicable ways. They tackle a lot of great philosophy in the movie, but like the characters these philosophical matters lack development and that was an even bigger disappointment to me then some of the characters’ suffering. 6.5/10 Overall: I think this movie is worth watching to see the fantastic animation and a memorable music score which adds nicely to both the animation and atmosphere. But the lack of adequate character and philosophical development and the fast pacing of the story will leave a lot of people hanging. 7/10

So after looking for this anime seemingly for years I finally found it. So did it live up to my expectations? Actually kind of yeah, althought the animation was a little shaky at parts and even though I felt like the run-time could have easily been cut in half, I still really enjoyed this a lot. Story- So without getting into spoilers, theres quite a few biblical references in this movie and it's not very subtle about it either, they are quite overt. the main premise is a girl named Linne has "died" and been sent to Hell, which apparently is an Academy for halloween themed monsters/humanoids. Well it's more than just an academy, its actually more like a city just full of these monstrous humanoids. So who rules this place? None other than demon Elvis, appropiately called Helvis. So the story is pretty much about Linne trying to get out of Hell and return to her mom, who she apparetly cares about a lot, which is nice. There are a few good twists and turns in this, so it's not all just pretty pcitures. Animation- Simultaneously the best and worst part of this movie. I have to give major props to Hiroshi Ohno (Art Director) and Kazuto Nakazawa (Char Design) because this anime really doesn't look like anything I've ever seen before. The originality and creativity in the art is really astounding. Theres a gothic-like almost Tim Burtonish look it has going. The characters also look very stylized the men mostly skinny beef cakes (it works somehow) and lets just say the females have generous proportions. The negative sign of this though, is that there are quite a few still frames and static animation. Despite this though. I believe the postives outweigh the negatives. I found the art extremely enjoyable and refreshing. Sound- Lots of awesome rock music and great inspirational music in general. Theres also a cute J-pop song in the end, which is nice enough. It's not the highlight of the movie, but it works well for this. Voices are great, really loud and powerful, at times it feel like an 80's shonen. Characters- I love the characters in this, they're fantastic. Linne starts off as a scared little girl and by the end shes as manly and awesome as Kamina in TTGL. The side characters are also extremely entertaining including all of the monster girls and the various other demon/monster things and ofcourse Helvis is frikin awesome. His whole "baby" thing at the end gets a little annoying sometimes, but his general awesomeness cannot be questioned Overall- Really unique and rewarding experience and I reccomend it to anyone who likes crazy over-the top stuff like TTGL or Jojo's Bizzare Adventures or even people who just like gothic and Tim Burtonesque art. Like I mentioned before I found the run-time a bit excessive, but overall I don't think it hurts the movie very much. 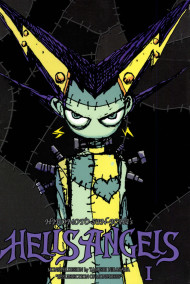