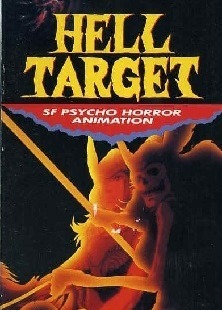 Both MD Geist and Hell Target are sci-fi anime from the 80's.  Though they have different plots, both are rather violent and gory and have a somewhat similar feel to me.  Neither are that great in my opinion, but if you happen to like one you might like the other.

A town in the countryside surrounded by forests and mountains. Five members of the cultural anthropology club at an old western-style school are trying to come up with ideas for their presentation at the school’s culture festival, when they find a collection of folk tales gathered by a student in their club 40 years ago. They realize that the mysterious “Bellflower Oni” that appears in the folk tales may be the basis for the popular free game “Aooni”, and decide to make that their theme. They manage to make contact with the author of the Aooni game, but he dies mysteriously soon afterward. The club members become suspicious at the author’s death and began to investigate on their own, but encounter a secret they never should have touched: a secret underground prison in the school. For some reason all the fire doors at the school are locked, and they are trapped in the school. The sound of the strange footsteps they hear soon turn to their screams… A new tragedy of the Aooni is about to begin.

In the distant future, human beings have been forced to leave earth and migrate to another galaxy. An advanced team of spacecraft arrives at a planet that is to be terraformed. Each member of the team is output by a biological 3D printer.

En route to visit a friend in another village, two kids go looking for a fabled shortcut through the mountain. Instead, they stumble upon an amusement park called Violence Voyager, and that’s when everything goes to shit.