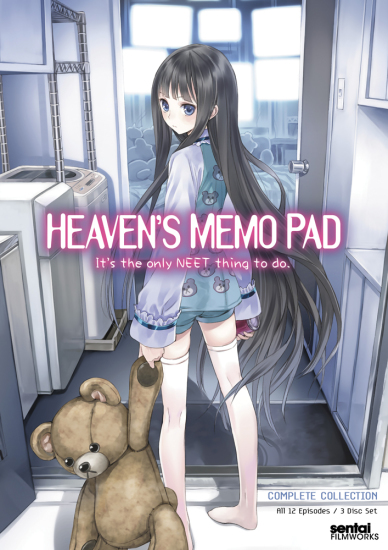 I marathoned this anime for the October (Catch up with Summer) Monthly Marathon. It was a rather fast paced anime with enough of a plot to keep it interesting, and enough character development to make it enjoyable.

Plot: The anime consisted of several smaller plotlines that all tied into the fact that Alice (the NEET detective) is a computer genius. One thing that carried the anime plotlines, but left a small plot hole, was how quickly Fujishima was accepted into the lives of everyone he met. (Also, how he stays as long as he does after saying how often he moves in the first 5 minutes of the anime...)Still, the anime has a flow to it, allowing for character development and rich background stories.

Animation: Released in Summer 2011, the anime is par with others released during the same time frame. The lines are crisp, the backgrounds are eye catching, and the ramen looks edible. A lot of the plot points were detailed designs or small objects, and the animation detail on these items was incredibly well done.

Sound: The score on this anime was decent, mainly due to the sound director Jin Aketagawa (noted for animes such as Nodame Cantabile and Honey and Clover). The sound allowed for some intense scenes, but also more mellow interractions between the main characters.

Characters: Unless a backstory or detail was important to the current plotline, it wasn't given. Some characters are introduced and made central in plotline, only to disappear off the face of the earth in the next plotline. Apart from a few important figures, the characters remain static. For the few who star in a plotline, the character development is engaging and has good depth.

The story follows Fujishima Narumi, a normal 16 year old boy, who is new in town and doesn't have any friends. He manages to befriend a female classmate, and thanks to her, he meets a lot of other people. One of them is Alice, the other main character, a tsundere hikkikomori and a self-proclaimed detective. She takes him as her assistant, and they solve cases together.

As interesting as it sounds, the result is actually pretty boring. It's all talk and no action. The cases usually do look interesting at first, but their solution is almost always predictable and unexciting. Apart from the very few moments given to the actual detective work, the episodes are filled with simple character interactions and, of course, fanservice. There are a loooot of suggestive shots of girls, and in every episode is at least one semi-naked one (in her underwear or wrapped in a towel). The first one appears not even 3 minutes in. There are also many scenes with the girls groping each other, taking baths together or undressing each other. And, of course, it wouldn't be complete without Narumi "accidently" walking in on them. All in all, there really isn't much to talk about. You don't need your brain for this one.

The animation is pleasant and colorful, though it's nothing out of the ordinary. It's not all that detailed or realistic for that matter, but it's nice to look at. And as far as I could tell, there weren't any blurry or deformed shots. The only (hilarious) mistake I noticed was that the girls' chests kept changing sizes. And speaking of characters, moe is typical for it's lack of diversity when it comes to character design, especially with female characters. Apart from their hair and the colour of their eyes, all girls look exactly the same, no matter if they're high school students or adults. Small stature, long legs, big eyes - all doll-like and as cute as possible. But I suppose it could have been much worse.

Like in all anime, even here the dubbing is of high quality. I was pleasantly surprised with the involvement of Ono Daisuke and Sakurai Takahiro, my two favourite seiyuus. Both the opening and ending songs fit well with the image of the anime, but they aren't that great on their own. The soundtrack doesn't stand out; you don't even notice there's any music at all.

Narumi doesn't have any special characteristics at all. He's like a background character, who was suddenly promoted to be the hero. His personality is completely flat. It really feels like he's there only to make Alice look smarter and more interesting. She herself is a seemingly super-smart person, but all she ever does is talk about what a unique snowflake she is, cry, talk about being a detective, boss people around and talk about how much better she is than everyone else. Her only actual skill is finding everything out on the internet. Then she miraculously appears at the end of the episode and saves the day with her judgment. Seriously, even Narumi does more than her. But yes, she is the most interesting character in the show, because just like Narumi, even the secondary characters are paper thin. Each one usually has just one character trait, like being a flirt or having short temper.

Challenge completed. And I'm glad it was so short. Seriously, Santa. To quote Calculon: "That was so terrible I think you gave me cancer." Anyway ... If you want more than just cute girls being cute - if you want an actual story or at least likable, solid characters with some development - don't watch this. You'll be wasting your time.

Great music, great animation, where can you go wrong? With everything else.

Kamisama no Memo-chou has one of the weakest opening episodes I have ever seen. I watched one more after it, it was actually much better, but after the forst one I just had so much antipathy built up in me, that I just dont feel like giving this anime a chance. Maybe if I wait a few days/weaks/lifetimes, I will forget the first episode and start it from the second one. Dont think so though...

Story: I have to compare this to Gosick. A lot of similar characteristics between the 2. Differences: while Gosick is set in a very stylish early 90s theme, this one is as boring as it gets: modern day Tokyo. While Gosick has interesting main characters, here we get nothing. While Goscik is logically (mostly) sound and the conclusions are actually somewhat smart, here the logic went for vacation and the conclusions are on the level of a 5 year old. let me give you an example: second episode. Girl takes the bag his ex yakuza father left him to a loli detective, she never met and doesnt even look into the bag. Yeah... Normally, our little detective should have called the police and thats that. Game over. Next, they find a phone in the bag, but much later. Okay: so the girl is concerned that her LOVING and CARING father doesnt leave any method of communication behind, but doesnt think to actually search that bag properly. The anime want to make us assume the detective is smart, because she knows a lot of background information of people, when they go meet her. Wonderful. So hacking a school database(obviously it had a firewall stringer than FBI, like all school databases) and being able to use facebook makes you a fucking genious. Apparently. Having a good basic premise doesnt actually mean you can mash up everything you want into the story and it reamins good. Complete fail. No creativity at all, barely manages to even create the illusion of intelligence. 0/10

Characters: Weak. Compared to Gosick, all the main characters seem cliche, insignificant and weak. Character evolution is all messed up. We get the shy japanese kid, who gets involved with strange people, has a lot of doubts at first, but after that, he starts to work wqith them, even meet up with dangerous yakuza to solve the case. Look good yeah? Well it would be good, if the lack of trust issue wouldnt be solved overnight. Episode one, guy is reluctant to do anything, episode two, he does whatever is asked of him. Its called evolution for a reason. This is not character evolution, its just obligatory character change, to create the illusion of actual evolution. Its insulting to the watcher. 3/10

Overall: Dont watch this. Watch Gosick. It has its flaws, but beats this anime to a pulp in every aspect that actually counts. Medicore score of 5, but only thanks to the high budget animation and music.

This is a story all about an ordinary guy name Narumi who got to meet a neet detective girl Alice. They work each other and solve mystery. Even do theyre first meeting isnt that good so far they got along each other.

To be honest each ep sort of they will solve mystery but it didnt take awhile to Alice solve the mystery. Actually in the begining its like getting to know more about them and stuff so sort of introductions but if u watch so on there is where a climax is heading but it isnt the fact that some eps are boring.

The OP was nice ! .. I mean I dont miss listening to it actually. Theres a background music that suits what is mood theyre doing but there is one who is an out of place 0-0. Alice voice actor  was okay but I hope it will be more cute/child like voice (since I think she is 12-13 .. age hasnt be revealed since Alice is so mysterious) Sort of like that but it is still good ^^b

Oh my I like Alice character! actually each of the characters has a screen view but it reallly didnt took awhile fo them to popped out but only for solving mystery and some sudden happenings but it is okay I have no problems with them :D

Well I did enjoy this show so far I like how Alice solve the mystery but for some reason I want some romance developing with Narumi ;-;.. Oh well the tsundere Alice wont be forgotten.The anime is good so far *thumbs up*

This show is entertaining. I thought the mystery was decent enough, though it wasn’t as satisfying either. Animation and music direction was good.

1.  This show is too reliant on the dialogue that if you miss any if it, you miss what’s going on. I was a bit overwhelmed by the amount of information I was getting from each episode.

2. I found the forced loli romance trope to be annoying.

3. The baseball filler episode in episode 9 was totally unnecessary. Skip it.

I’d give it a 7/10 at best for the mystery, which by the way was mostly episodic. I stopped expecting there to be any connection between the individual episodes after watching the first few episodes, so I didn’t find this fact disappointing.