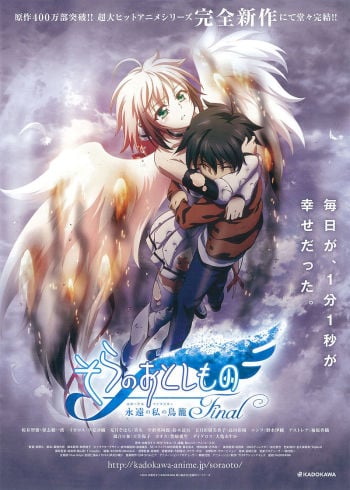 As a preface to this, I personally read the manga before watching the anime and films. If you haven't read the manga then this review may or may not mean as much. I dunno... it's still a shitty movie in my opinion. -- "Hey, man. Wanna ruin a great manga ending with fifty minutes of absolute bovine fecal matter? Yeah, dude! Lets do it!" I wouldn't hesitate to believe that a conversation like this actually happened. I've seen some terrible adaptations of comics, manga, etc., but none have truly made my stomach turn as this movie. The large community of followers for this manga and anime series waited patiently (myself included) for this movie, which was already downgraded from a third season. Now, it almost feels like the producers and creators of the film slapped us in the face. Story: As mentioned earlier, I came into this movie after reading the manga. Upon finishing this extended anime episode (50 minute movie people), I couldn't think of a word in English or Spanish that would appropriately reflect my thoughts. I don't know if I've ever seen an adaptation that nearly ruined a series for me (and there's been some atrocious Snow White remakes). Not only does the story completely excise ~30 chapters of a genuinely stirring plot, it obliterates the order and any attempts at "flow" seem to be tossed out with the morning garbage. Furthermore, a majority of the film only references extra chapters (chapters proceeding the official end of the manga which have little to no bearing on the story or characters at all). Any semblance of comedy or romance was utterly fruitless because of multiple disconnects in the sequence of events. Manga fans: If you were expecting a decent follow-up, don't even bother. Nonetheless, I tried to view the story as if the manga didn't exist. ... It's still not good. There is no sense of pace and the animation style is noticeably different from the previous film and anime series. The movement of the movie as a whole is disjointed and what could have been a decent ending (from what was shown) ending up leaving me feeling disgruntled and agitated. Whether you look at it as a standalone animation or an ending the end result is the same: I feel bad for the people who paid to see this in theatres. Story: 1/10 Animation: As previously mentioned, the animation is noticeable different than the preceeding film and anime series. The lines are harder and the colors are blatantly over-exaggerated. Facial-expressions were stagnant and even the chibi moments felt dull and overtly childish. I'll give a little respect for not completely ruining this aspect, but to any viewer who's coming into the movie from the past film and series, it's a clearly noticeable and (for me) aggravating distinction. Animation: 5/10 Sound: The music and sound effects were okay, but they weren't blazing any trails. However, I did not feel the selection(s) invoked any of the neccesary emotions or even begin to reflect a majority of situations. They weren't "bad" per se, but there was often a disconnect between the scene and its music. I originally gave the sound 5/10 credit for not totally dropping the ball, but there were little to no connections that could be made (or even inferred for that matter) with the audience which I feel is much more crucial to the success of an animated film or any motion picture for that matter. Sound: 4/10 Characters: The characters are, more or less, the same characters we've come to know and love. However, the pacing of the plot and situational placements made the characters seem distant and unrelatable. I wanted to be able to laugh with Tomoki in his chibi form or snicker at Ikaros' complacency, but their depictions made me feel awkward and left out of any attempts of comedy (or even romance). This feeling forced a negative opinion of characters that I desperately wanted to love. Characters: 2/10 Overall, I didn't even finish the movie the first time I tried to watch it. Literally. I put my headphones down and walked away. I don't know how I convinced myself to sit down and try again. I and hundreds of other fans ended up waiting to watch 50 minutes of what could be summed up as a child's attempt to conclude a series that obviously contained more depth than the scriptwriters, producers, and director seemed to comprehend. A surprisingly tragic yet ultimately happy ending was inaccurately warped into five minutes of confusing chaos which fell face-first into the most difficult 45 minutes of filler I've ever watched (and I've seen all the Bleach and Naruto fillers). I could ramble on and on about my distaste for Eternal My Master, but in an attempt to discontinue beating this already dead, decrepit, and plagued horse any further I'll quote the words of another reviewer whose statement sums up my concluding thoughts perfectly: "Read the manga ending instead, pretend this one doesn't exist."

*Possible spoilers! You have been warned!*Before I start this rant, keep in mind that I've read the manga of 'Sora No Otoshimono', which I thoroughly enjoyed. I tried my best to review this movie without taking the manga into consideration, but after deciding that the anime tries purposly to follow the manga, I came to conclusion that judging it based on the manga was fair. If you've not yet read the manga, I'd highly encourage doing so, or else you may not fully understand my views on this movie. Now, lets get started on this fine peice of... work. After thoroughly enjoying the hilarities, ecchi moments, and the light romance in the first and second season several years back, I immediately jumped into the manga to fill the usual void we viewers get after finishing an anime. I was given the usual light-hearted comedy, and ecchi that I came to expect from the series. When the ending arc began and finished, I was amazed at how well the author tugged at my heart, and wrapped the story so well. Obviously, the final movie should have provided me with the same thing right? WRONG! Instead, the movie consisted of 40 minutes of the usual Sora No Otoshimono antics, and 10 minutes of a rushed, supposedly touching final arc that left the viewer dazed and confused. Story: As I previously stated, a majority of the final movie consists of your average group antics. The other 10 minutes however, is a trainwreck. In these 10 minutes, 7 or so chapters of the manga are forcefully crammed in, and ruined. There is little to no pacing, and no emotional impact as compared to the manga's. I cannot begin to contemplate the writer's thoughts at the time, but I would assume he allowed the 0verflow staff to finish it for him. In all honesty, I would have prefered an attempt at an alternate ending altogether, rather than this thrown together rubbish. Animation: The first thing I noticed about this movie, other than the absurd time, was the difference in Animation. The Animation is noticably sharper, and much more detailed. Colours are much more bold, and even the faces and character make-up seemed different. I felt that this did not help the anime overall though. The chibi animation seemed too silly because of these changes. Since a good majority of the anime is spent in chibi, I felt I did not enjoy many of the moments, that I would have if the animation had stayed the same. As a whole, the animation was top-notch, and professional, however it simply did not fit the anime, nor fit in with the previous movie or seasons. Characters: Like I said, the movie is filled with the antics(love that word) you've come to love. As I, and Articus43 previously said, their new art-style made them seem very out of place, and made it hard to fully enjoy the comedical moments. I will admit that though the story was ruined, and animation unfortunately changed, the characters remained roughly the same, which pleased me greatly. Ikaros was her cute self, Tomoki the usual perv, and Sohara the clutsy Tsundere. Sound: The sound was the thing that disappointed me the most, other than the story. While watching the first 5 minutes, I was surprised that the soundtrack was neither intense nor 'sad'. It was simply average. As you most likely know, sound in any show or movie is a major factor in how you feel during scenes. Unfortunately, SNO:Final chose a very poor soundtrack in the rush, which ruined the feel of most scenes that should have been intense or touching. All in all, this movie was simply a mess. Poorly chosen soundtrack, animation that should have been kept original, and a story that simply left me confused and honestly angry. I had to force myself just to finish the damn thing so that I could rant about it as I am now. I'm baffled as to what AIC was thinking, and dearly hope that their next creation can raise my currently, low respect for them.

I was never ever think about to write a reniew, but this movie is very disappointing. The animation is average, but if  you seen the previous episodes you will notice it. The story was empty and boring,and the characters are just the shadows of its "old selfs". So if u want to see how the sora no otoshimono series ending you can watch this "thing" but it will disappoint you very well. 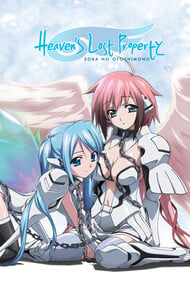 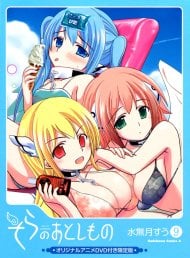 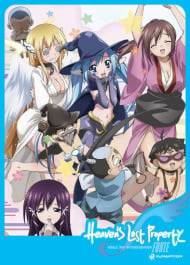 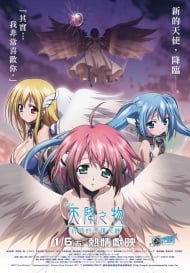 Heaven’s Lost Property The Movie: The Angeloid of Clockwork 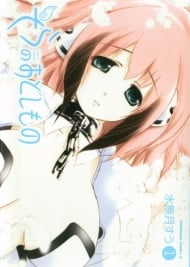