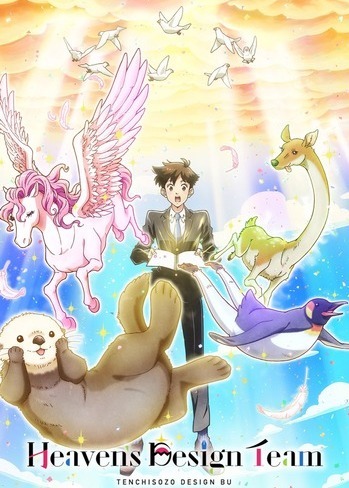 I used to work in a design agency like this one so I might be a little biased when I say that Heaven’s Design Team has been one of the nicest things I’ve ever had the pleasure of watching this season. Faced with the daunting task of populating the earth with animals, God, in his ever-knowing wisdom and omnipresence, outsources a team of angels to do all of the work for him. The twist – and a good number of the punchlines – comes in his vague, self-contradicting requests. Despite his ever-knowing wisdom and omnipresence, it turns out God is just like every client of every design agency ever. He knows what he wants, but doesn’t quite know how to describe it. Hmm, and I don’t know about that black shade you used for the eyes. Do you think you can make that a lighter shade of black? Oh, not that light. Look, now it’s gray. I wanted black. Black!

The appeal of Heaven’s Design Team comes in how likable and unpretentious it is from top to bottom. The team of angel designers are good, fleshed-out characters who bounce off well against each other. They each have their own quirks and designing go-tos, but these don’t completely define who they are as characters. Shimoda, the angel go-between for both God and the designers, isn’t too shabby himself. He’s plain and unremarkable for a reason, but he’s always eager to learn and knows the finer points of hip-hop. Thanks to his naiveté and relative innocence, he’s the perfect audience avatar for a show like this, throwing in retorts when necessary and asking the right questions so we can all follow along without looking like uneducated chumps.

Heaven’s Design Team is good, educational fun. It doesn’t talk down to you and even better, it knows exactly which trivia bits to highlight for us. That means we get a lot of insight into the animals’ strange diets (spoiler alert: there’s a lot of poop-eating in the animal kingdom, it turns out), their mating rituals, and their strange anatomies. At the end of each episode, you’ll know why it would be impractical for a unicorn or a Pegasus to actually exist, why an elephant’s ears are so big, and why koalas are A-OK with eating their own poop. That the characters each have their own ways of reacting to their design requests makes the show a lot livelier and a lot less dull than the way it’s spelled out as “edutainment” on paper.

All in all, it’s a show that’s able to balance its learning material with its soft parody of life in a creative design agency, indecisive clients and all. It’s a show that knows how to have fun and make you feel good in only the most wholesome ways it can think of, never mind if a lot of that has to do with animals making babies and yes, animals eating their own poop.

This show puts zoology in a more fun and interactive format. If you aren't that interested from zoology or biology to begin with you're not really going to like the show. It is humorous though, it doesn't just spout science nonsense without comedy.

The show is set up more episodically. There isn't an overarching storyline except that they need to make new commissions every episode. They'll make roughly two, but it goes into different kinds of detail on the biology--you shouldn't expect a whole biology lesson. There is a short part of the episode where they show the animal in real life and explain more biology bits. The characters allow for more thorough engagement with the material through their personality or style.

The characters are all vehicles for presenting different kinds of animals; they are all likable but don't expect a deep backstory or anything.

The animation is bright and colorful and lets the viewer take in the written content without being bogged down by heavy visuals. The animation does its job in encouraging exploration of reality.

The sound is nothing to gawk at, but it's not bad imo.

I personally really enjoyed it, it was comedic enough for me to continue watching it and I got to learn something new each time. I always enjoy bright colors--so the animation played to my moth tendencies. They vary the animals enough so it isn't just a new mammal every time. I would say go for it if you like this kind of stuff and if you don't like it at the 3rd-ish episode drop it.

Not a fantastic show, but not bad either. I didn't look forward to watching it each week, but the episodes were entertaining enough, even if I did fall behind at one point because I couldn't bring myself to put it on again. The characters didn't have much depth to them and can each be summarized in a few words, but I didn't expect much on that side of things. The music wasn't bad, but I consistently skipped the ending because it got annoying pretty quickly. This show gives you exactly what you might expect from something like this, and no more. There were some funny moments here and there.

The thing I liked the most was how every episode you'd get to know more about whatever animal they just created. It was cool to get all these fun facts and little bits of knowledge. In a way, it reminded me a bit of How Heavy Are the Dumbbells You Lift?, in the way that you always know what each character will do or say and you get educated on something as you watch. I much preferred Dumbbells to Design Team, because I found the characters and situation more likeable and entertaining.

It's not a bad anime. If you're looking for a simple show that you don't have to think about all that much, this might be something you could check out. It was kind of fun to try and guess what animal they were creating based on the request and rough drafts. Not something I would recommend to many people, but sometimes all you need is a simple show like this!

This is cute and informative. The song is adorable and fits the genre well. The personality of each designers can be seen with their works.

Unabara for cuteness, Meido for the unorthodox functions, Tsuchiya and his magnificent horse design, Kimura and his priorities etc.

Would definitely recommend to those who want a lighthearted show.

I was really hoping this would've have been a more funny animal educational kind of show but sadly it was not. I won't say what is funny or not, a lot of bits fell flat and on average they has 2 animals species take focus with some minor ones sprinkled about. The best part of the show was when they showed the animal stills and talked the real biology. So with that in mind I would say if you start getting annoyed or bored by episode 3-4 then drop it it won't get better otherwise its sort of a high energy and bright colored show so it will try to pull your attention so there's that. that's the brief reveiw now to the more detailed one.

Now the sound is bad you would think they would pull actual detailed animal audio but nope generic bird chirp generic snake slither. Super simple and I swear I wouldn't be surprise if I heard the wilhelm scream. Also music is alright

Oof the characters are so freaking boring it's mind boggling, again a show that was doing a funny quirk of how animals were made ,deciding to not primarily focus on animals but on the characters it's just 🤦‍♂️ . But yes the characters have less depth than plank from Ed&edd&eddy.

the story there is not really a story so it's hard to describe it with lack of direction like a slice of life but with no life to see a slice of or goal to achieve it just exists.

I have to say there really isn't a draw to this show other than the animals but they don't even really focus on them. Really their are better more interesting and/or funny shows to watch really not worth the time