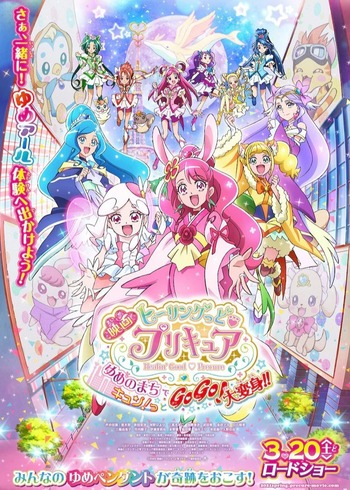 Yume no Machi de Kyun!  Tto GoGo! Daihenshin!, the feature movie for Healin' Good Precure has two claims to fame.  One, due to the covid-19 pandemic, this feature movie, a project usually developed for presentation during the twentieth to thirtieth episodes of a given series, was the last project for HGPC.  Second, it was the first feature movie not devoted to the precure team; the team of Yes! Precure 5 GoGo was invited in for the action.  This was an innovation so big that the next precure team, Tropical-Rogue, will bring on HeartCatch Precure for their special.

The plot reminded one of the XD and New Stage final movies with the emphasis on dreams.  These were the final projects that featured the lead of Yes! Precure 5, Cure Dream (mere coincidence?).  In fact, Healin' Good Precure is visiting a Dreamworld type of recreational activity where one's dreams are activated and set in a quasi-real setting.  This would explain the sequence where athletic Chiyu performs a perfect high jump before a packed Tokyo Stadium.  A nice backdrop to all those unfulfilled dreams one wishes to pursue.

But things are not as cheery as one would expect, if you discover that such dream generation is the first phase in a diabolical experiment.  Dream generation leads to dream-power absorption.  All this in a doctor's effort to maintain the life of a child who is in reality a dream-like elemental floral spirit.  This could be nothing more than a noble experiment gone totally wrong, especially when the doctor's lab assistant is a product of pathogerm background, the self-absorbed Egoego.  Egoego replicates himself to a team of ten clones to crush Healin' Good PC.  But, as the attack is ready to commence, Yes! Precure 5 GoGo arrive to even the score (4+6= 10 ... you do the math.  10 Precure > 10 knock-off bad guys).  The forces of evil (okay, this is just one imp Egoego) retreat to await the next chance.

The theme of selfish dreams underscores the ideal of dreams being the harmless things which motivate us to transcend ourselves.  The selfish dream is focused on Kaguya, a nearly fourteen-year-old girl who is said to be the daughter of the doctor-mom who is conducting the experiment.  Kaguya is not a real human, and her life will dwindle away on her fourteenth birthday.  Nodoka, Chiya, Hinata, and Asumi work to celebrate that day, but their efforts are blocked by the sudden shift of momentum.  The doctor, pressed to get results faster, goes all out to garner dream-power.  Egoego captures Yes! Precure 5 Gogo and their particular magic girl strength is slowly being sucked from them.

All this is to save Kaguya, who refuses to have her life prolonged at the cost of the suffering of others.  No problem.  Egoego steps in to steal the power and becomes a super-sized monster who will syphon off the last of Kaguya's strength to crush his enemies.  But Yes! Precure 5 Gogo escape, join Healin' Good in battle and push the wicked ego-freak to the max of his powers.  10 Precure > than 1 over-sized jerk of a villain.  More math … do it!

The anime technique began with the typical standard practice seen in the HGPC episodes, but it geared up their CGI for the epic final battle, including a HGPC transformation sequence that puts the regular fare of the series to major shame.  The final battle was a blast of effects as the city of Tokyo is blown to smithereens and just as magically restored.  It was Toei at its best.

The feature movie often was far superior to the series in the elements of plot, character (better villains, in particular), and setting.  This was imperative with Yume no Machi de Kyun!  Starting slowly, the twists were almost obvious, but the sudden appearance of more precures than the expected four was a tweak I longed for.  Seeing the older versions of Pretty Cure was getting rare  ... All-Star editions had to give way to the crossover concept.  For a feature film to open its doors to the 'veterans' makes one want to see who shows up in future projects.

Thanks for the slam-bang action ... and the memories.