He is My Master - Reviews 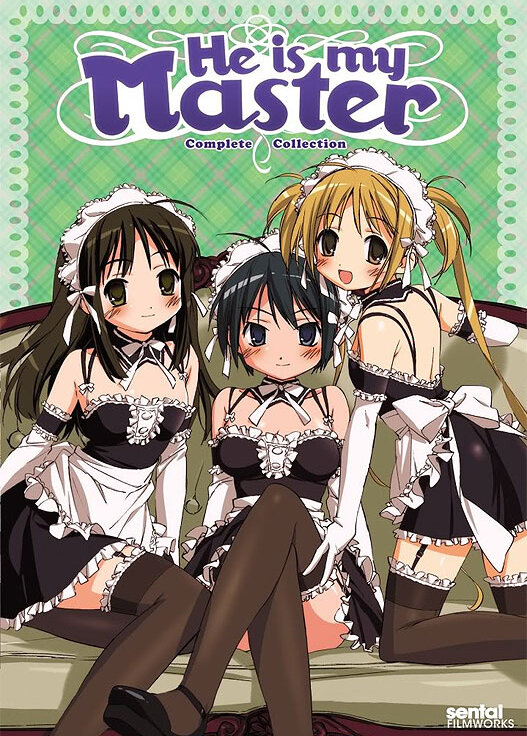 The story of He is my Master is largely repetitive and boring. The same thing happens in practically every episode with little variations in between them. The only thing that seemed to drive the story was making the main character of Izumi suffer, weither it be through sexual harasment or having an increase in her debts. The premise is horrible to begin with, and just sets up a predictable anime. An Otuku middle-schooler who has wealth coming out of his ass, hires some cute, underaged girls to be his maids, and he forces them to wear compromising outifits. You can see where this is going from a mile away. The individual episode were repetitive and had cycles of sexually harasing Izumi, exploits of Pochi the alligator and Yoshitaka, and then some random contest set up by Izumi's sister Mitsuki. The same thing happens practically every episode, and the only character that makes anything interesting is Mitsuki, which without her, He is my Master would be twelve episode of watching everyone sexually harasing Izumi. If your the type who just loves animes with no plot and nonstop sexual harasment of underaged girls, then you have just found the perfect anime, and if your the other 99% of the human population, then avoid He is my Master like the plague.

The art in He is my Master seemed to me to be uninspired and bland, in a bad way. There were several times when the poor quality of the animation made me wonder how on earth were they allowed to get away with it. The art felt too artificial, and its only purpose was to try to see if it could make you drool over Izumi's body, which it rarely did. However the art didn't reak to high heaven, and wasn't horrible enough to make me rate it lower.

Oh my God did these characters suck. All of their actions were formulamatic, and there is only one side to every character, and it seemed like they were only one dimensional characters. They were not unique at all and all but one of the main characters were obsessed with tormenting poor Izumi. Yoshitaka is just a rich, otaku, snob, with severe perverted tendencies, and lives to sexually harass girls. He does nothing else. Izumi was repetive for always complaining. Seriously thats all she ever does besides beating up Yoshitaka for sexually harassing her. That is her character. Mitsuki was the only character who made the plot move, but she always did it the same way. She has to settle everything with a contest. Even the final climax turns out to be a contest put on by her. She is also annoying and doesn't realize that Yoshitaka's perversions are a bad thing. Anna used to like Yoshitaka, but now shes a lesbian who only wants to get with Izumi, and go off to Holland to get married to her. All she ever does throughout the show is sexually harass Izumi. Pochi is pretty much the same as Anna, only he's straight, and is an alligator. Overall there was little character development, the main instence being when Anna turns lesbian after realizing that Izumi was much better than Yoshitaka would ever be. There are other small instances, but they are sparce, and not all that important. The minor characters all acted in a predictable manner also. Simply put, these characters suck.

He is my Master is a shitty anime. There is no need for me to deliberate on this fact any longer. Go and watch something else.

Wakey wakey sunshines.Yup you guessed it,it's that drunkard Dion again back on track with another anime review which will make the whole wide world's skin crawl.I also swear a lot,you've been warned.

Now,He is My Master...If i were to base my review on title alone then i'd use the F-word a lot,call it a wet fraud and call it a day.But this is a review so i have to write some shit to keep AP happy.

And thankfully i have some things to say cause apart from the fact that this anime is one of the worst i've ever seen in my life it is also one from a studio that its' works are mostly top notch and shook the world to its' foundations.I'm talking about Gainax of course,who in their infinite wisdom decided to stop making great animes and make rubbish instead for people with the aesthetics of Fu Manchu.

Look i get the need for diversity by Gainax.Say you are a chef for example,would you want to cook just pasta for the rest of your life?Course not,but that doesn't mean you'll waste any potential talent on making food that can only be eaten by maggots.And this is the case with this studio.Cause nobody can say that they didn't have any potential,in fact they were one of the big guns in the industry.But they had a meeting and said "know what,fuck them great animes,let's make something dreadful,something that will give the audience the equivelant of pig flu for the eyes".And i'm sorry but as far as decisions go that is one of the stupidest ones.

You're probably thinking right about now,that i'm talking rubbish and that this anime isn't as bad as i make it to be.But no,this anime among other titles before it was one of the reasons the studio went from Messiah to a fake meat on the cross.So let's see what the hell i'm on about.

And we start with the story.Sawatari Izumi and her younger sis Mitsuki decided to leave home and are in need of a house and a job.They happened to find a job advertisement outside a mansion the size of the moon,looking for live-in maids.But what they found instead in the mansion besides a job was a very rich,but very perverted kiddo,Nakabayashi Yoshitaka.From there on it's a trip down deja vu highway.Every single thing is repeated until the end of time.

Every episode is more or less the same.It begins with Izumi being unhappy with how her life has turned out and then Yoshitaka,Pochi,Anna(Izumi’s possible lesbian conquest)come into the scene and everything ends up in kicking and screaming at each other like they are in kindergarden..They certainly seem to have the mental age of a kid in one. But then Mitsuki proposes a contest to settle things,which involves Izumi having to do something insane,she doesn't want to do it but does it nevertheless cause.....No freaking idea why.Maybe cause it would be fun?To who?Even my 3 yr old nephew would struggle to find that shit funny.

Credit where it's due,Gainax made two very very weird as fuck characters with Yoshitaka and Pochi.Yoshitaka,for me at least,with his aggressive perverted side was a refreshing change from the MC's you tend to find in harem anime that serve ONLY as punch bags.And Pochi?Tell me where else would you find an alligator that touches little girls inappropriately?Honestly i cannot put into words just how great this creature is.Now that isn't to say that i liked them as characters in the end or that they're even remotely memorable.

But it's with the female cast that things go south really.Izumi is all the time like she's on her period and everything makes her angry for no reason,but as things stand the rest of the cast always seem to find new ways to make her more..Let's say ill-tempered.Mitsuki is the polar opposite of her sister.She is as carefree as it gets and is there to serve some purpose..Oh no she's only there to produce some funny challenges for her sister..

As far as songs and animation go i cannot say i was impressed.The songs were pretty standard,VA were...Ok-ish...And animation was a bloody mess.

Now if you want a comedy with lots and lots of fanservice there are tons of anime out there that do a better job than this.If you want to relive that Gainax magic and you think that this might do the trick...Well no.

I really hated this anime. I seriously do not ecommend this anime to anyone. Almost every character has to piss me off one way or another, especially Izumi. I can safely say that this is one of the worst anime I have ever seen.