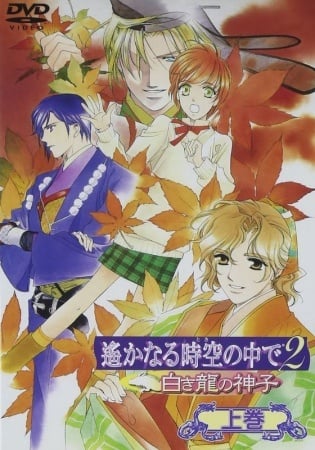 If you're looking for anime similar to Harukanaru Toki no Naka de 2: Shiroki Ryuu no Miko, you might like these titles.

The Princess and the Moon

A magical white rabbit takes the unhappy Sachiko to the “Land of the Moon” where Sachiko meets her “true self.”

The story follows a girl named Neko Miyabi and her interactions with five attractive young men. The story takes place in Tokyo and centers on an imperial opera company named Kanadegumi.

One day, Yuzuki is enveloped by a mysterious light suddenly emanating from her cell phone and finds herself in an unfamiliar place. The scenery spread out before her almost resembles Sengoku period Japan-- But this is another world known as "Shinga" where non-human creatures such as vampires and werewolves reside. Long ago, the various tribes of Shinga lived together peacefully under the protection of the Himemiko who possessed special blood. However, one day the Himemiko suddenly vanished. With the protection of the Himemiko gone, the world has fallen into a period of strife.