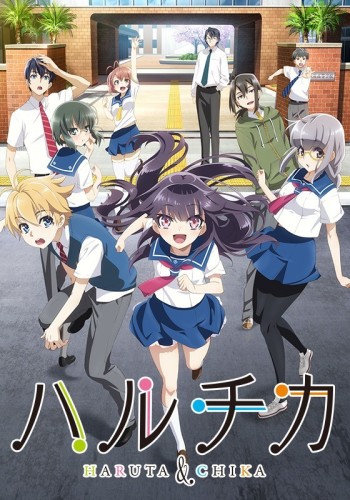 *So let’s start with the two main aspects of this anime being mysteries and music.

I like mystery anime’s where the mysteries themselves are well thought out. That they are based on reality. With that I mean that there isn’t a ‘deus ex magina’ moment that solves everything. No, I like it when the solutions to the different mysteries are logic and contain realistic lines that lead to them.

And that was the case in HaruChika, all the mysteries and their solutions were based on real things. Let’s take the mystery from the first episode. Everything that is mentioned there like how Bach incorporated his name in one of his pieces is correct and true. Now the mysteries weren’t of the quality of let’s say the ones from Hyouka. That were some amazing mysteries but these from HaruChika gave it a good shot.

*The second main aspect of HaruChika was the music. About the OST I can be very brief: any sort of classical music that’s used in an anime gets my approval. It’s that simple. But something else I definitely want to address was the opening song. “If we could weave Rainbows” was my favorite opening song of the season, I loved the bright atmosphere of it from the first time I heard it. And being my favorite OP of the past season is quite the achievement since there were many great OP’s like “Re:Re:” from ERASED and “Knew Day” from Hai to Gensou no Grimgar. But “If we could weave Rainbows” beat those becoming my favorite OP of Winter 2016.

*Than my last positive point was the animation and actually also here I could be very short: PA Works delivers quality animation, period. We saw that in Angel Beats! and definitely last year in Charlotte. PA Works already won my JV Award for Best Animation twice in a row. Now they probably won’t win it this year with HaruChika but still the animation was on point. The instruments used in the anime were animated properly and that’s not an easy thing to do.

Also I have to mention something about the character design. That was a tat special especially the way the eyes of the characters were done. But it was no bother to me and it actually emphasized the fun and bright atmosphere that HaruChika wanted to emit.

*Now one of my positive points was the music but I also had a problem with the music being that the fact that this anime takes place in a music club is completely superfluous. This anime could have taken place in any sort of club. When you use a music club, I expect that the music will be a very important element in the story of the anime but here that wasn’t the case. Yes, some of the mysteries had to do with music but overall I found that the music element was underused in HaruChika.

*A negative point I seem to have a lot with mystery anime’s lately is that there isn’t an overall storyline. An overall storyline concerning the mysteries that is. In HaruChika there is an overall storyline about how Haruta and Chika try to gain more members and after that how the club tries to qualify for this competition. But there wasn’t an overall storyline concerning the mysteries. I said the same thing in my review of Hyouka where I had the same problem. And it’s not that it’s impossible to implement such a storyline into your anime. Last Fall season “Beautiful Bones: Sakurakou’s Investigation” did have an interesting main storyline about a main mystery that even didn’t get solved at the end of the anime. That’s an open ending I really want to see resolved in a second season because it drived the anime forward.

*And that open ending brings me seamlessly to my next point being the open ending in HaruChika. Here we got an open ending about the romance in this anime, not between Haruta and Chika but on the impossible gay relationship between Haruta and Kusakabe. Now I never expected a real relationship between them because that would be quite pedophelic. But from the first episode Haruta says he’s going to confess to Kusakabe and than in the entire anime he doesn’t. And the same thing can be said for Chika. I hate open endings no matter what it is.

*Transisting into the characters because I had a problem with one of the characters being Haruta himself. I didn’t really like him, I found him to be a smartass and overall his entire personality didn’t charm me. Another thing was a combination of the characters and the story. As soon as a character’s mystery is solved and joins the club, there doesn't happen a lot anymore with that character. Some of them like Miyoko still have some influence on the next mysteries but others like Maren and Kaiyuu kind of vanish from the stage becoming nothing more than background characters.

So as a conclusion, I wonder if I set the bar too high for this anime. I put it on the second place on my Winter 2016 expectations list and it didn’t fulfill my expectations. It was fun to watch but nothing more than that. And that’s why I’m going to rate HaruChika: Haruta to Chika wa Seishun Suru at 3 stars. Still if you’re into mystery anime’s, this might be one to put on your To Watch list because of the fun and brightness of the anime.

Story – Nonexistant, each episode is completely disconnected from any other. The primary goal, to get gold in the national competition,  is set in the first episode, but is then promptly forgotten about until the very last episode.  Each episode has “mysteries” that are either painfully obvious (blue’s clue’s level) or absolutely contrived. (a piggy bank house) Things simply fall into place, more often than not, with our main characters doing nothing. One episode just glosses over all our core characters realizing one of their aunt’s past love interest was a mass murderer. (this was the entire mystery of that episode, the conclusion of an whole episodes runtime.) Upon the realization, no one so much as bats an eyelash, and within 30 seconds it’s swept under the rug, and back to happy go lucky characters, because “mystery solved!”  Consequences are something this anime clearly thinks is beyond its audience’s conceptual grasp. Each episode gives you the strong impression that this story was written by the egocentric mind of a young child, specifically a person who has yet to realize that other people experience life and have emotions and that there is a reality outside their perception. The end result is an insultingly bad story.

Animation – Little to say, considering the amount of exposition for the sake of exposition, most of the run time consists of still shots with moving mouths. It’s not that animation is inherently bad in any way but there’s not much of it. It’s nothing remember.

Sound – There are token bits of instruments being played for a couple seconds about once an episode, and then finally for a couple minutes at the final episode. Which is nice, but to say they are forced in is putting it lightly. Instruments are only there because it was on the checklist of things to put in the episodes. Even in final (and only) performance, it seems like the studio really didn’t have any interest in including people playing music. As such, by and large everything is forgettable. The story does the music no favors, and constant exposition relegates any music to ambiance.

Characters – One dimensional, ever character can be summed up as “the person that was the focus of problem X in episode X,” completely emotionless, and devoid of any awareness of their surroundings or other people. They accomplish nothing, they learn nothing, and each episode is as effectively a hard reset of the characters. As for the main characters, Haruta will have exposition to spout, regardless of there being justification for him having any knowledge of a situation. He has the answer because the script dictates he’s the “guy with the answers” character. Chika is there, because we needed to have a girl for the marketing. The show could replace Chika with a different generic extra every episode or she could be removed completely and it would have little to no effect on the show. She is nothing more than a cute face to put on the series.

Final Thoughts – One of, if not the single worst anime I’ve ever watched. There are no redeeming factors. To add insult to injury, this show being billed as ‘childhood friends saving a failing Wind Instrument Club,’ definitely garnered my high hopes heading into it. Hopes which where swiftly pounded into the dirt, as the description on the tin is an abject lie. This show has nothing to do with music. All the work to get to nationals is canned as happening off screen in 10 seconds at the start of episode 11. This is not an exaggeration, the work to achieve primary goal laid out by the show, is given a whole 10 seconds of pre-episode exposition to say that the anime couldn’t be bothered to actually show any of it. In reality, the show could have been done with any club, it being a Wind Instrument is completely irrelevant. It’s blatantly obvious the only reason HaruChika got animated was to cash in on the success of Hibike Euphonium because there are some instruments in it. Completely horrible.

Haaa... I can't believe ANN lied to me *sob, sob* I just got deceived by the genre shounen-ai!! XO

The comedy was not exactly my type, but I'll say it was pure. The most beautiful moments for me were Haruta and Shinjiro. (I know, the oddest part I did was to skip to ep 12 after 1 Because I WAS TOO DESPERATE TO SEE BL!!) I know I might seem weird, but as a true fujoshi I'm not fetishizing but just that I thought it would be a perfect, pure bromance between student/teacher... haaa but maybe I got trolled... >3

My review might seem odd, but I was only here for BL and yes, I do not deny the fact that I'm always looking for strong BL hints. I respect gays, and heteros both. I do not despise any character neither do I judge them. So... overall, I'll say it was ok..? yeah it was fine.