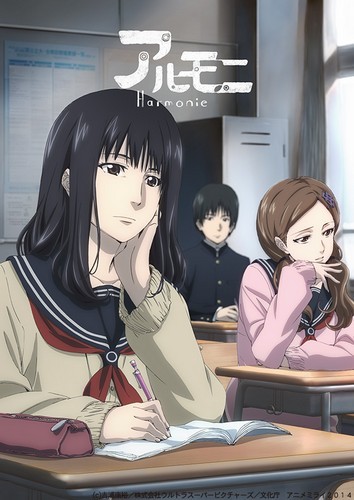 I'll just point out right off the bat that it's impossible to really say anything about Harmonie's plot without spoiling it, and that would be a shame. It isn't often that you can run across a short that can get you so invested in such a short amount of time. I'll try my best to sum it up without spoiling much.

Harmonie takes an interesting approach to romance. It only has 25 minutes to work with, so it ensures that it uses them to the fullest. Most of the scenes are done in school and all of them move the plot forward in a natural and well-paced manner. It's a fairly simple premise, since it just is taking place in a normal high school: boy (Akio) is interested in a girl (Juri), and we watch as they get closer together. However, the twist here is about what happens after about the twelve minute marker, since we discover that Juri has always had an overactive imagination, to the point where a psychologist was called in to deal with it. This is the thing that brings Akio closer to her, but it is not presented in exactly a positive light.

I don't want to spoil the rest of the plot, but the way it proceeds is incredibly interesting. The ending especially is a cliffhanger that begs for an extra thirty minutes to an hour to work with, but for what it's worth, the ambiguity of what will happen is still satisfying.

It's very clear that the staff of Harmonie were working hard to make every aspect of it realistic, from the plot to the characters to yes, the art. The character designs are just like people you could actually meet in the real world and the animation goes out of its way to show movements that look natural and smooth.

The backgrounds also have some nice touches here and there, at least as varied as they can get when the main setting is a squeaky clean school building. Characters' rooms don't look like blank voids, they actually are shown to be lived-in, and the lighting effects add a nice touch. Most of the shots are done in a manner so that you feel like you are right there. The camera remains close to the characters, and it generally doesn't move much, which allows for the viewer to pick up on body language and expressions very well.

Of course, the team also gets to show off a skill at making a fantasy world as we see Juri's dream in a realistic style and it looks pretty neat, if a bit empty. These scenes aren't many, but they show a vastly different feel than the real world. The more memorable shots are vast, empty ones that contrast with the very close and personal style that the rest of the runtime is filled with.

The sound is a great example of how to match the tone of the story. Most of the scenes don't have music, notably the scenes where Juri seems to be developing feelings for Akio. The music that is present is a bit more neutral, a mix of melancholy and optimistic. That's a good thing, I think, since Harmonie is trying to leave things a bit ambiguous, and I respect that. It isn't spoon feeding the viewer and telling them how to feel, though it easily could have done just that. The ending theme is also a very beautiful piece, for the record.

The voice acting is well done. There are a few recognizable actors present, but the direction really brings them to life. This is heavily out of the necessity of the runtime, obviously. Characters have a variety of emotions and it ends up being very convincing. Like, "these are actual conversations you could hear in school" type of convincing. The sound effects also really bring the world to life. If you watch the opening scene, you honestly feel like you're standing in the middle of a classroom, for example.

For what it's worth, you can't really do much with such a short time to develop characters. As such, I am admittedly being a bit lenient on the scoring here. Harmonie, however, goes above and beyond in this regard. Like I mentioned earlier, the characters feel like legitimate human beings. They have interests, they have very real emotions, they act differently around different people, and the list goes on. With only 25 minutes, I'm quite frankly amazed at how you can get to know Akio and Juri this well, and they even managed to squeeze in some legitimate character development. Though, like I've mentioned before, the plot ends a bit too early. If it had a little more elbow room, they could've fit in more development. Even the side characters, who have little to no screentime, reminded me of a few people I've met in the past.

The presentation of the characters is another thing. The direction is to make their actions and emotions a bit more ambiguous. I wasn't sure whether to be charmed by Juri's dream world or not. In short, it doesn't glorify or demean anything by saying "this is how we should be" or "this is a bad idea," it brings up some ideas that are up to the viewer to explore.

Yes, yes, YES. Of course I recommend Harmonie. In less than a half hour it got me more invested in this romance than many series can do with a whole season. Because it is just very genuine. It's completely standalone and that's perfectly fine. The only major flaw I can find in it is that it ends right when the story starts getting really interesting. If any anime producers out there want to fund a second episode to possibly give it more closure, I'd be all for that - but as it is, Harmonie still is a great experience that shows exactly what can be done with 25 minutes. Sometimes the Young Animator Training Project produces a short that is just "meh," but I still love it since it often produces gems such as Harmonie. It's short, it's got great production values, great writing, and great direction. Check it out if you haven't. 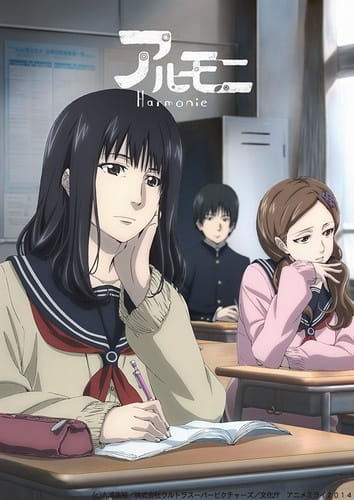 For a one shot episode, Harmonie packs quite the punch in both tone, animation, and overall acoustic qualities.

I cannot talk about much of the plot without ruining the whole episode but what I can say is that they studio really crammed a lot of story into twenty minutes. The overall purpose of the plot might not come easily to everyone watching the show but it does hit pretty deep once you really think about it. I kind of wished that we could see what happens after the episode was done.

Astounding, fluid, beautiful, crisp, bright, dark, ext. This anime landed everything you possibly need in putting on a perfect visual presentation. It's not just the beautiful and handsome character models that make this anime so great to look at; it's the amount of effort that shows in the end product. Shadows, glares, sunlight, facial expressions, eye straining, it's all here and done so well.

The music, ambient background noise, and voice actors did an amazing job. The opening scene has many different conversations going on at once and they somehow matched all this up with perfect lip syncing. The music is very soft when present and isn't just some generic sounding crap you would find in most anime. The piano and singer did a great job trying to reach out to the audience. The background noise was very fitting and hit all their marks. Slaps, inner dialogue, chair movements, just everything matched up with what was going on screen. The voice actors did a very good job relaying all of their characters emotions.

We unfortunately did not get to see the characters mature as much as we hoped to but from what I saw, they became likeable and I was invested fully by the end of the anime. The main character wouldn't stand out very much in any other anime but he had true feelings; something that is hard to achieve without coming off corny. The supporting cast doesn't really get a chance to shine since it is only a single episode but they do a great job of setting up plot points and providing some very funny moments.

This anime was part of the Young Animator Training Project which almost always turns out eyegasm looking anime. What we were lucky to see in this instance however was the addition of a interesting plot, characters, and some of the best sound design I have heard in a long time. If you have twenty spare minutes just do yourself a favor and give this a watch.

I found this animated film very emotionally and visually compelling, due to the small psychological elements added in with a light sense of melancolly and dread for a wold existing only within the mentality.

Having to watch this at the age of emotional maturity it has given me a lot of bittersweet memories of what once was my youthful state of mind.

The art was very clean and polished without any unecissary details, pleasing to the eye due to it's simple yet expressive outlook.

The sound and characters could use a bit more work, and yet are able to quite well collab with the overall depth of the story.

Overall I was intrigued by the project and was able to enjoy it to it's full extent despite some minor hiccups.

This story is one of the many light yet mentally captivating creations out there and coud be enjoyed both visually and emotionally by all sorts of different demographics, not set as a specific type of age rather than a specific type of mentality to which physical age doesn't apply.

It deserves a chance purely for it's depth in the exploration of a mental bond.