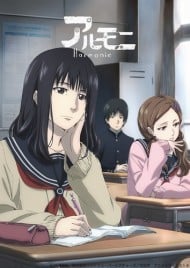 Every person has his or her own little world. Among the 34 bustling students of classroom 2-1, there are many such worlds. Akio Honjō's world — my world — is filled with passionate talk about last night's anime with Yoshida, Watanabe, and other friends. It's a fun, comfortable place…. But, I always wonder. Wonder about the world of Juri Makina, smiling and surrounded by gorgeous friends on the other side of the classroom. One day, I enter her world. But it's not as simple as it sounds.

***This is a spoiler free review*** For a one shot episode, Harmonie packs quite the punch in both tone, animation, and overall acoustic qualities. Story: 8/10 I cannot talk about much of the plot without ruining the whole episode but what I can say is that they studio really crammed a lot of story into twenty minutes. The overall purpose of the plot might not come easily to everyone watching the show but it does hit pretty deep once you really think about it. I kind of wished that we could see what happens after the episode was done. Animation: 10/10 Astounding, fluid, beautiful, crisp, bright, dark, ext. This anime landed everything you possibly need in putting on a perfect visual presentation. It's not just the beautiful and handsome character models that make this anime so great to look at; it's the amount of effort that shows in the end product. Shadows, glares, sunlight, facial expressions, eye straining, it's all here and done so well. Sound: 9.5/10 The music, ambient background noise, and voice actors did an amazing job. The opening scene has many different conversations going on at once and they somehow matched all this up with perfect lip syncing. The music is very soft when present and isn't just some generic sounding crap you would find in most anime. The piano and singer did a great job trying to reach out to the audience. The background noise was very fitting and hit all their marks. Slaps, inner dialogue, chair movements, just everything matched up with what was going on screen. The voice actors did a very good job relaying all of their characters emotions. Characters: 8.8/10 We unfortunately did not get to see the characters mature as much as we hoped to but from what I saw, they became likeable and I was invested fully by the end of the anime. The main character wouldn't stand out very much in any other anime but he had true feelings; something that is hard to achieve without coming off corny. The supporting cast doesn't really get a chance to shine since it is only a single episode but they do a great job of setting up plot points and providing some very funny moments. Overall: 9.1/10 This anime was part of the Young Animator Training Project which almost always turns out eyegasm looking anime. What we were lucky to see in this instance however was the addition of a interesting plot, characters, and some of the best sound design I have heard in a long time. If you have twenty spare minutes just do yourself a favor and give this a watch. Enjoyment: 10/10 Thanks for reading my review! If you liked my writing style, would like to see some other reviews, or just want to talk, please stop by my page! Sincerely, Awesome Drummer

I found this animated film very emotionally and visually compelling, due to the small psychological elements added in with a light sense of melancolly and dread for a wold existing only within the mentality. Having to watch this at the age of emotional maturity it has given me a lot of bittersweet memories of what once was my youthful state of mind.  The art was very clean and polished without any unecissary details, pleasing to the eye due to it's simple yet expressive outlook. The sound and characters could use a bit more work, and yet are able to quite well collab with the overall depth of the story. Overall I was intrigued by the project and was able to enjoy it to it's full extent despite some minor hiccups.  This story is one of the many light yet mentally captivating creations out there and coud be enjoyed both visually and emotionally by all sorts of different demographics, not set as a specific type of age rather than a specific type of mentality to which physical age doesn't apply. It deserves a chance purely for it's depth in the exploration of a mental bond.