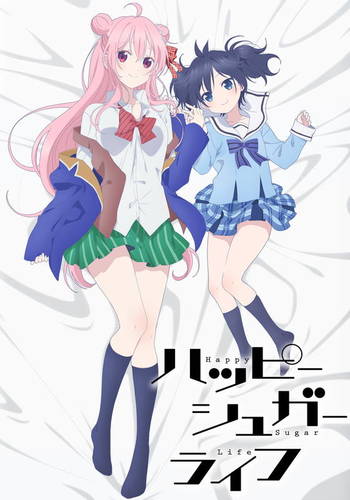 The last minutes of the the last episode had me crying my eyes out.

I loved how this anime was able to represent the mental disorders of the characters in such a clear and sharp way that horrify you but at the same time make you understand all this nightmare vision seen from the person who has them and who suffers. The contrast between all of this and the sweetness of the "happy sugar life" amplifies every signle emotion that the characters feel. From the first episode to the last one it is a growing narrative and the end didn't disappoint me. As i said at the beginning, i think that everything is well represented and for this type of anime this the key.

So what anime is there that is probably more fucked up than Citrus? Well, a recent anime that had come out is named Happy Sugar Life, which is anything but. I swear, out of a lot of the shows I had watched thus far this year, this show is without any doubt the most disturbing thing I had ever watched. Based on a psychological horror manga, Happy Sugar Life is about a high schooler named Satou Matsuzaka who puts on a façade of politeness when it comes to her work. Initially she was believed to have been pretty easy-going, claiming that she had relationships with millions of boys that she would often leave within a time frame of three days. So she didn't have a firm understanding on what true love really was. At least until she met someone who she immediately fell in love with and decided to live together with. Except that is not what you may think.

My main issue with the story? It is severely contrived. There are several moments designed to be convenient. For instance, there is the gamechanger that was episode 9 which involved a scenario that was inevitably going to happen, the only problem being how the show went from A to B in that regard was too easy. It also didn't make much sense regarding circumstances. The other issue with the show was that it had an overwhelming amount of psychopathic characters. Other than the main protagonist, you have several other characters who range from being just as bad to worse than Satou. This oversaturation of psychotic characters can easily be off-putting because aside from about three characters, non of the other characters are likable.

As for characters, Satou herself is a unique take on a yandere. Unlike her predecessors, Satou is the least murderous yandere I have seen thus far. While she dos resort to it, it's only the final option. Satou would instead use bribery or blackmail to get what she wants. She is dangerously prepared as if she is always one step ahead, and most of the people she is up against are understood to be even more morally grey. As the show grinds down, however, Satou's character drastically changes. Her once anti-villainous actions now become truly reprehensible, but at this point, it's more than blatant that you were never supposed to root for her in the first place.

Shio is the young lover of Satou of whom she is trying to "protect" from the outside world. Because of her young age, Shio is susceptible to not fully understand anything that goes on around her. Anytime Satou is acting odd? Oh, she's probably just running late. I will admit that the "children are innocent" trope is kind of insufferable this time around because Shio could come off as a complete imbecile for not picking up on Satou's more violent actions. While it could be argued that it is because she is a young girl, it comes off as pretty hard to feel genuinely bad for Shio due to her situation.

Mitsuboshi Taiyo starts off as a nice guy but one bad experience with his boss triggers a deep fear for older women from him. So, he wants Shio so he could "purify" himself. At times, I don't know what the show is trying to do with him; in some episodes, he is comedic in his pursuit of Shio. In others, the trauma he had experienced is played seriously. But then at times, that same fear is played for laughs. I also felt that his change in behavior was too drastic. I get why he is like that, but his personality takes such a big leap, it is honestly hard to really feel any singular feeling for him.

The only real good characters (in a way) are Shouko Hida and Asahi Kobe, Shio's older brother. Shouko is Satou's best (and only) friend who is one of the real sources of levity you can get from this show since she is the only one without any serious mental issues. She worries for her friend because of how she was always secretive about her life, and her continual prying into her life does result in her downfall. Asahi is trying to find his sister so that he could rekindle his family after willingly spending five excruciating years with his major hellhound of a father. From the beginning, he comes off as truly sympathetic and you want him to achieve his goal, but given how the show opens up, I have doubts that he'll win.

The animation and sound were also good. I like the saccharine feel of the art style of the characters. It only makes the dark underbelly of the series even more unsettling. The animation also takes on drastic changes that present the scenes in dream-like states. I love the music. The music often manifests as a broken music box making scenes disturbing mainly because of how it takes something as pleasant as music from a music box and warps it into something dark and twisted. Lastly, the opening is also good IMO. The song sounds both adorable and sinister, aided along with its illustrations, of course. It gives me a real Doki Doki Literature Club feel whenever I watch it.

I do admit that I find the premise of the anime disgusting because it reeks of smut just for the sake of shocking readers of the manga. With Citrus at least it was the sexual assault and pseudo-incest, here, you get kidnapping, implied pedophilia, molestation, and all other inappropriate subject matter. I would not recommend seeing the anime due to the content, not even if you are innocently curious about it, but I won't take away the experience for you if you decide to watch it anyway despite my statements.

Honestly WHAT THE FUCK. I don’t kno what I watched but I kinda enjoyed it.

Story: Basically a girl named Satou whos seemingly normal girl who’s actually about as mentally stable as a seesaw falls in love with an 8-10 yr old girl named Shio. Insanity (literally and figuratively) ensues. It’s so cute but so scary and disturbing at the same time. Honestly, it’s a favorite of mine since I’ve read the manga previous I knew what was gonna happen but shit just felt better in animation. It was really “fun” to watch Satou dive deeper into the pool that is insanity. It was however over-saturated with insane characters. And the ending left me kinda shit-faced

Sound: The intro exemplifies what this anime is. A shitshow of insanity and sparkles. It’s really good though. Satou has a nice voice. background music serves its purpose

Animation: The intro animation also exemplifies what this anime really is. the little scenes where Satou loses her fucking noodles and it changes colors or like gets more saturated with a certain one, like a dark pink is solid. Another great animation thing I liked was the candy jar thing. The character design was cute.

Characters: How can so many people lose their shit in such a small period. I’ll give two examples

Satou: Isn’t emotionally developed enough, and since she hasn’t experienced anything that seemed to make her happy, it gave her a distorted view of what makes you happy and what love really is. And she falls for the first thing she deems as love without knowing the true feeling. It’s possible

Taiyou: Was sexually assaulted by a female boss. He immediately has a mental breakdown and develops a sort of adult gynophobia. He then becomes a pedophile for Shio. Implausible but it’s in the reaches of reality.

the pedophilia is probably offputting, but with both characters lacking a mother, the loves feels as if its motherly in a way, she doesnt love Shio romantically, Shio is just the first person who truly makes her happy

Ahh... yandere. I mean it doesn't have to be awful, it's just that it's all pretty awful. Even then, we can get a perverse enjoyment from it. Two examples - School Days is truly one of the worst anime ever made (fight me), but it's still fun and I'd say I enjoyed Mirai Nikki more than I hated it. My point is, nobody apart from serial killers watches yandere series because they expect something deep and touching, but that doesn't have to stop us from enjoying it.

Happy Sugar Life, however, is not very enjoyable to watch. I'd argue that the appeal of yandere series is their campy silliness- they have the same sort of over-the-top appeal as goofy summer horror movies. HSL fails because it wants to be to be as repulsive as possible, but it forgets to include anything resembling a coherent plot, memorable characters (I can barely even tell most of them apart), interesting dialogue... there's nothing. Everything seems to be loosely strung together, poorly developed plot lines intended to lead to the next awkwardly placed shock piece. Admittedly I'm reviewing this after episode 9, before it has finished, but the show is already far enough off the rails that there is no saving it.

I'll admit some moments are creepy, but for all the wrong reasons. Characters act utterly inhuman, in completely ridiculous ways. The main character is clearly a psychopath as well as deeply disturbed (though, the show fails to go into much detail about how exactly she ended up so twisted), and how inhuman she acts would normally be creepy. Except that just about every character is pretty fucked up, so it kinda ruins the creepiness because there's little contrast. Very quickly you reach the point where you're just staring at the screen, wondering what act of horrific violence or depravity they're going to throw at you next, but there is little in the way of actual impact because it's so nonstop. I'm not offended or unsettled by any of it, just bored and confused.

Positives? The animation is ok I guess. It's nothing special and many of the characters look far too similar and generic, but overall it's smooth and has some nice lighting and color effects. The music is decent too, and is nicely layered into different situations to add a little impact (the music can't help that what's happening is stupid).

Overall: strongly recommend you pass. It's not even fun, it tries to be hyper serious but overemphasizes the shock factor, resulting in a bland mess.