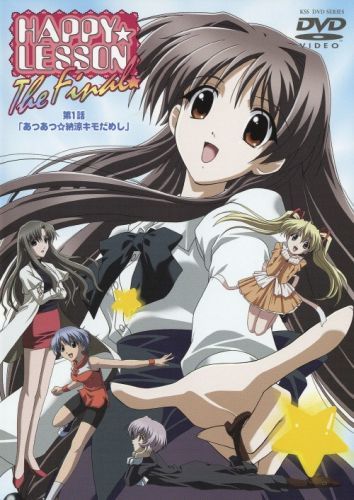 By the time I started this, I had no expectations of it. I just wanted to be able to say I was done with Happy Lesson. (Looks like at least half of viewers quit before this point. I'm not sure which group is better off.)

The supposed focus of this show, the resistance to tearing down a school building, is an incredibly unimportant thing to build a story around. Yes, it is valid to tell stories about small things, but at this point, I want something with more impact. They attempt to relate it to the heart of the story, which leads to an unsatisfying resolution to the original Happy Lesson premise. I won't say what it is, though you can see it coming for a while. All I'll say is, it makes me question the mamas' initial motivations more than I already did. And now I ask, "What about the character relationships you (were supposed to have) spent two seasons building?"

The title sequences are never to be taken literally, but Nagatsuki's appearance leads me to expect her to have more than the brief pointless role she does. The fact that this bothers me reminds me how much more likable she is than any mama.

The Final is an attempt to turn a comedy more serious. That can lead to something critics like (Life is Beautiful), but this is more on the "Hancock" level.

I only like to start anime and manga that have been completed. In the case of Happy Lesson, that policy doesn't gain me anything, as there's no satisfying ending. And now I can say based on that, "Don't bother starting the original."