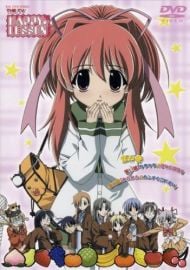 I picked up this series based on its wacky high concept, as I often do. Not knowing anything more about it, I hoped for a "this is how it would really be" series. I hoped for a show that could take the harem premise in a totally unbelievable direction, yet take itself seriously with honest emotions and maybe even uphold the value of non-nuclear families, all while remaining funny. High expectations.Happy Lesson doesn't even try to live up to them. The five mamas are pure cardboard. You can't parody cliches just by presenting them straight. Their spotlight episodes are only to highlight their flatness.And there's no real feeling behind it. I never learn why any of the mamas chose their roles. Except Mutsuki (because she's the Yamato Nadeshiko), none of them feel like adoptive mothers. Friends, at most. Uzuki and Satsuki are a lot more childish than Chitose. I can see how this is supposed to be funny in principle, but it doesn't work. And amazingly, none of them induce PSL. Uzuki? I never go for the Token Loli or the ditz. Satsuki? I can like rough'n'tumble Bokukko Action Girls... but not if they're big violent babies. Kisaragi? Yes, mad scientists are fun to watch. Yes, her slow, matter-of-fact speech pattern would usually be lovable. Why is popping out of ceilings cute? She even dances upside-down in the ending credits. But she can be casually cruel as easily as affectionate. Yayoi? What's even supposed to be appealing about her?The only character to induce moe - and the funniest - is Kanna. Outrageously exaggerated, she's one of the few cases of the show succeeding on its own merits. The omake "Warm and Fuzzy * Alone with Kanna", though not central to the show's premise (which is why it's an omake) is surprisingly one of the better episodes. I don't find puppies cute. Kanna's reaction to one - "It must have a heating unit" - shows why she works as a comedy character. Her funniness (and cuteness) come from who and what she is.Happy Lesson relies on slapstick, not wit. It also takes the Mel Brooks approach that things are funnier when shouted than spoken, only with a lot weaker jokes than any Mel Brooks production.All remaining hope for satisfaction is dashed by the inconclusive ending.I guess some of the humor is supposed to derive from the show teaching the audience obviously wrong lessons.The ending credits feature chibi versions of the cast (that serve to remind me how un-cute the rest of the show is) dancing to one of the bounciest songs I've ever heard. And yes, I do still sing it in the original Japanese.

Story (2.5/10): "Give harem anime a chance." That phrase, spoken by my once best friend--note, our falling out is, surprisingly, unrelated--prompted me to wander into an anime bootleg shop in Chinatown and snatch the first short piece I could find. I watched three episodes with a look of horror on my face and promptly shelved it.  Picking it up and watching it in its entirety, six years later, living on my own and in another state, is neither something I can explain or condone.  Despite my original intentions, Happy Lesson is not a typical harem anime. While it does rely on slapstick comedy and random fanservice to get a laugh from its target audience, and it is about a teenage boy, Chitose, trapped in a large house with young women he barely knows, all of these women are Chitose's "mothers" and teachers, not love interests. After the death of Chitose's parents, five teachers at his school hear about him living in a mansion alone and decide, independently, to become his substitute guardians. Chitose, though not thrilled by the idea, and disappointed that he can no longer live every teenage boy's dream of an early bachelor's pad, can't bear to turn any of them away. He instead shoulders the responsibility of avoiding the inherent scandal! This premise, within its genre, has the potential to be innovative as long as one suspends one's disbelief. Since one of the subgenres of this show is "drama," there could have been strife and character development revolving around Chitose's eventual acceptance of these women into his life, but there isn't. There could have been more tangible conflict between Chitose's sisters living outside of his mansion, but there isn't. There could have been more tension from the show's often absent female romantic interest, Chitose's class president, but there isn't. The list of could have beens goes on and on and on. The most conflict one can expect is a sprained ankle and academic malaise. That hardly constitutes a story, sequel or no. Animation (5/10): I'll admit, the visuals are appropriately pink, cutesy, and brightly colored, right up to the closing sequence featuring female bobble-head dolls as the credits roll. This show is also old, and characters are drawn using overly harsh lines inappropriate for the subject matter. Mainly unremarkable. Sound (3.5/10): The soundtrack, like the animation, fits the premise of the show. Against my own will, I found myself humming the campy "Tokyo Nights" ending song in the quiet of my own room, door locked, long after I had exorcised the spirit of Happy Lesson from my television set. The within episode background sound, however, is virtually nonexistent, leaving me nothing to listen to but the voice acting. Yes, the "voice acting." I applaud the male seiyu, Daisuke Kishio, of the series for the effort, but the high-pitched shrieking of the predominately female, and often overly excited, cast is a horror from which no manner or quantity of earplugs can save you. Characters (1/10): Like many harem animes, Happy Lesson contains crates of character archetypes, from the strong over-eater, the spiritually inclined shaman, and the unintentionally violent scientist, to the acclaimed jpop star. The women find their archetypes and don't move from them for the entire series, even during their feature episode, of which each of Chitose's "mom"s receives one.  Chitose, the main character, outwardly pretends to be a stock tsundere character, but his development into a family-oriented guy is largely internal and takes all of an episode before it becomes incredibly obvious. The only person without good intentions is the greedy real estate agent in episode two. There are no characters in this show. Overall (2/10): While I do not particularly enjoy harem anime, I can still spot a good one when I see it. Happy Lesson, while it tries to be innovative, is not a good harem anime. It fails in the characterization department, where its genre dictates it should excel. Looking for an anime containing the general harem formula that promises to entertain and surprise? Check out Elfen Leid. Interested in one that excels within its borders? Try Love Hina, if you haven't already. Whatever you do, stay away from Happy Lesson. Unless you do have the patience to watch the more popular, and apparently plot-ier, sequel. I won't be joining you in that effort.

For all intents and purposes, Happy Lesson (as well as the sequels that came after it) was mildly enjoyable. The comedy was there, some dramatic aspects were there, and every character had some kind of backstory that was touched on at some point, however ridiculous some of them were. Admittedly though, something about the nature of this particular "harem" rubbed me the wrong way. While the females of this series don't fit the cookie cutter mold of how girls should behave in a "normal" harem, in the end a harem is still a harem, and the series inevitably throws subtle cues at the viewer at some point to say "Hey, it's not impossible that this guy is going to end up hooking up with one of his many mamas/teachers". That fact paired up with how freaking young some of the female characters look makes the scenario for the storyline even less believable. If you're not into the whole taboo forbidden relationship thing, it'd be a good idea to find another harem series to watch. Another shortcoming, one that I mentioned briefly above, is the backstory of some of the characters. While they all have one at some point, some of them are rather lame, as if either not enough thought was put into them, or they wanted to make something big that ended up cheesy instead. For whatever the reason, don't be surprised if you find yourself scratching your head thinking "what the h*** just happened?", and not having that question be answered. Likewise, don't come into this series expecting any sort of realism, because you're not going to get it. The entire premise of the story is unrealistic to begin with. (How many schools do you know of that have that many attractive young female teachers?) If you can look past those things, however, there are several good laughs to be had. This is really the only consistent aspect of the series. The humor used in the series and its sequels is almost as diverse as its cast of characters. That being said, it's still nowhere close to the level of a lot of the other comedy flicks I have watched. So Happy Lesson isn't terrible. But it's not above average either. If you're a casual anime fan, you may be able to enjoy it, provided you're not offput by the ridiculous premise of the "harem". If you're like me, and tend to be selective of what you watch, you can still try, but I'd estimate about 66% of you out there will find it disappointing. 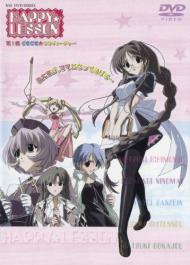 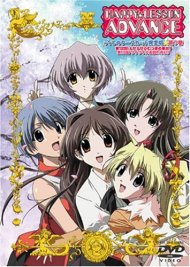 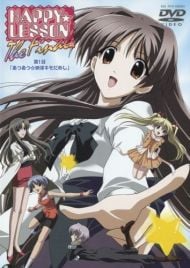 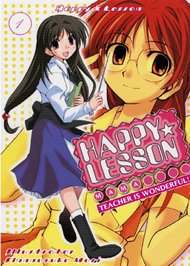