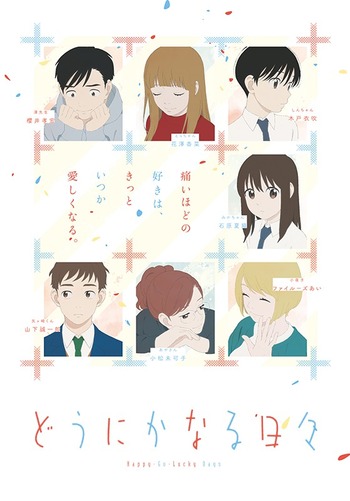 Yeah... no. Absolutely disgusting. This anime's plot is divided into three different stories. The first, and the only okay one, is between two women and their romantic/sexual attraction to eachother. It was a bit oversexualized, but I'm used to the male gaze, however, when it progressed to the second story it started to become more and more uncomfortable, until the last story, which i absolutely horrifying.

The second story is about a student from an all boys high school confessing to his teacher, who seems to like him too. The teacher tells his own sister: "I love high school boys". That lgbtq+ representation is even worse than the first one. It's disgusting and pedophilic.

And then the worst of them all, the third story. I don't wanna dive too deep into that one, but an eighth grade boy loves his own cousin, who once wants to "see his balls" and does so, eventhough he said no. That is clearly sexual assault and I'm shocked that this isn't being discussed.

Conclusion: The idea is good, and it starts off okay, but the execution completely goes downhill after. The rest is simply disgusting. A no-no from me. The two points are for the lesbians in the beginning and for the animation, that's it.

Don't watch this. It's disgusting. Not worth it, go watch something better.

Honestly difficult to rate this one! I really really love the first couple, and it's so nice to see actual romance for lgbt+ characters! Representation really does matter, and damn if the first section of the film didn't have me grinning like an idiot! Highlighting small intimate moments definitely complimented the art style, and generally reaflected that warm and giddy feeling of budding love!

The other stories sort of fell short for me, which is why I have no idea how to actually rate the movie as a whole. The characters were cute and pretty well fleshed out , but the storylines either went completely over my head (entirely possible) or were actually just a bit meh.

I will say that it was nice to see some original plot lines! Even though some didn't hit the mark for me, I can certainly say that it was a breath of fresh air! We all love a trope every now and then, but watching the same plot lines play out over and over can get a little dry, even for a romance junkie! So getting some interesting characters and storylines definitely was a complete win as far as I'm concerned!

Overall, I would recommend giving this one a watch, just keep your expectations in check!

I know it looks nice but huge warning after the first story, which in all fairness the best thing about this film, this film takes a nose dive in terms of how comfortable you feel watching it, I personally found it really disgusting, I can kinda get the second story though still weird but the third is just utterly gross and not in a good way.

It would be prudish to call the progression of this film, from start to finish, a cinematic rendition of the slippery slope, but, even so, it wouldn't be wholly inaccurate.

Happy-Go-Lucky Days is a series of four(-ish) vignettes based broadly on the sexuality (in all definitions of the word) of the characters in each vignette, ranging from the romantic to the vulgar--a range that is fine, in and of itself, with the romantic sexuality being quite lovely and the vulgar being...well...

It wouldn't be unfair to say this movie is built as a trap, in some sense, leading with a matter-of-factly mature tale of a lesbian couple's "meet cute" and burgeoning (and, yes, sexual) relationship--but then transitioning to three increasingly discomfiting stories that attempt to handle "risque" topics with the unwarranted self-confidence of a high school student hitting on his teacher.

It's all well and good to delve into uncomfortable topics, but the distinction between effectively unsettling and gross is often one of skill, the ability to pull some complexity within a taboo/"taboo" past the taboo and into the thought-provoking. And the filmmakers, here, lack this in spades.

Which is unfortunate, given how interesting the premises of the other vignettes are.

Give it a pass. Or only stick around for the first vignette and spare yourself the need for an after-movie shower.

I wanted to give 0/10 but they weren't accepting. So, overall I will divide my score into three words.

To be exact honest, I liked the second gay couple. I wanted it to be continued till the end. The gross pair was the last one. It sucked...