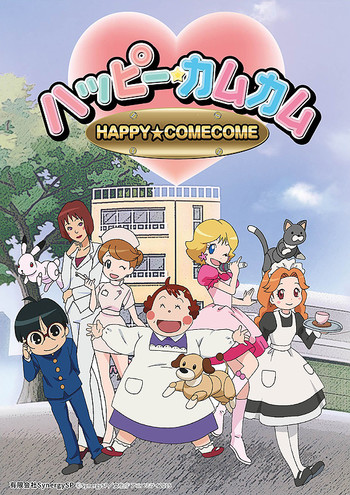 MechatroWeGo are robots that kids can pilot and operate. Satoru pilots an old WeGo that his grandmother gave to him as a gift. When the kids gather in their secret base to race their WeGos, Satoru can't take the first step. Satoru's classmate Akira invites him to race again. This is a story of boy and his robot, set in a seaside town in the near future.

Yuuto Matsubara is a 27-year-old man who works in the sales department of a major toy maker, but he isn't able to pursue his dreams, and he feels hollow every day. He's even given up on love with his childhood sweetheart Ai. One day a "Time Driver" robot that runs on the power of dreams appears in front of him, and he is forced into the cockpit against his will. Inside is a 12-year-old version of himself.

In a future not too far from now, humanity has advanced to a point where the line between Homo Sapiens and Androids have blurred completely. This has occurred so that the species could survive. Technology has allowed humans to travel into deep space to colonize other planets and galaxies deep in the universe because Earth has become uninhabitable. One of the many unfortunate results of this robotic Darwinism is that human behavior and consciousness has also changed over the years. Much of what makes one human -- love, family, intimacy etc., have all become things of the past. Almost legend...

In a cone-shaped land named Kikyougahara in Shin Province, there lives a girl named Hana. She is a gentle girl, who always thinks of her family, in particular her great-grandmother Chiyo, whom she affectionately calls "Granny." One day, a traveling entertainment troupe named the Natsugawa Genzaemon Troupe happens by, and the villagers welcome them warmly. Upon finishing their performance and receiving their acclaim, the troupe's leader spots Hana with some "oyaki," his favorite food, and transforms into a fox in his excitement. It turns out that the leader Genbanojou, and his companions O-Natsu and Shinzaemon, are all foxes who have taken on human forms. Genbanojou hastily negotiates with Hana, telling her that in exchange for keeping their secret, he will grant her one wish. She answers, "I want to let my Granny see the cherry blossoms."

In the children's room of the Amanogawa household in the neighborhood of Shichifukujin, there are five Engimon: Haruo (a papier-mache dog), Kin-chan (a goldfish paper balloon), Hebikura (a bamboo snake), Chief Daruma (a daruma doll), and Koume (a Kokeshi doll). They are always watching over the siblings of the household, Himi and Yamato. One day, an Engimon from somewhere else appears, and Himi leaves the house to chase it. Haruo and his friends come alive, much to Yamato's surprise, and together they go to rescue Himi.

Zunko Tohoku can make any mochi into delicious zunda mochi by shooting it with her Zunda Arrow. Along with Kiritan Tohoku, Itako Tohoku, Usagi Chuugoku, Metan Shikoku, and Sorara Kyushu, she enjoys eating zunda mochi while being full of happiness. Chanko Ouedo conversely leads the Natto Factory along with her companions Tsurugi Chubu, Shinobi Kansai, Awamo Okinawa, and Meron Hokkaido. Even though zunda and natto use the same type of bean, the edamame used in zunda and the soy beans used in natto are harvested at different times, with edamame being harvested first. As a result, the members of the Natto Factory are afraid of a decrease in the quantity of soybeans harvested. Chanko sends Awamo Okinawa and Meron Hokkaido to Zunko's house to assassinate her, but a third power makes their appearance.

In a futuristic world, the "Nanorace," people whose genes contain nanomachines that grant them special abilities, are controlled and suffer prejudice from the "Purerace" of normal human beings. Beck, a legendary hunter with the power of "Red Ash," aims to undergo the surgical procedure to become Purerace. Alongside the large yet timid mechanic Tyger, they use their parallel machine to fly to the old world, doing dangerous jobs. One day, they suddenly run into Call, a girl pursued by the duo of Safari and Stripe. Call, Beck, and Tyger together travel to the clockwork world. But Safari, Stripe, and their leader Deny, stubbornly pursue Call, and are finally in a position to make their attack on Beck and his friends.