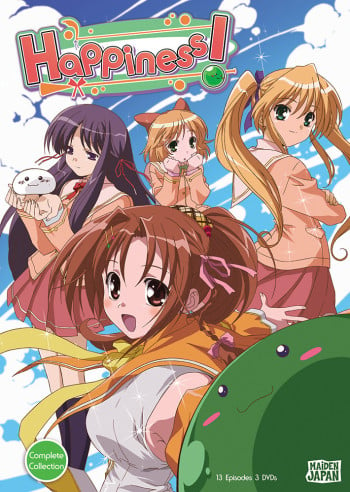 Since the fortune telling research training camp, Haruhi and Yuma have become good friends. They were busy preparing for the Mizuhosaka Academy festival which brought them closer together. However, Minagi sensei from witchcraft class had to go to a business trip suddenly and asked Haruhi for a favor.

The Magic of Happiness 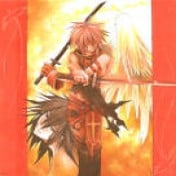 If you have seen either of these animes you will undoutfully like the other. They both go along the lines of the magical schoolgirls Vs. one protaganist and have one or more of the schools students after them. Both have there funny parts but more so in Zero. Both are good animes so I recomend seeing one if youve seen the other.

Zero no Tsukaima and Happiness are two of a kind I think.

They are both mostly a one on one romance that takes a sideline to the story. Both center around a magic school with a female mage lead character and a romantic interest that is more than he seems.Though the female leads are exact opposites of each other...

both take place in a magical world though the story in zero no tsukaima is more engaging. also both involve a school that teaches magic.

Throughout the ages, fairy doctors served as liaisons between humans and fairies; but in the present time of the 19th century, fairies are nothing more than an old wives' tale. Nineteen-year-old Lydia Carlton is one of the only remaining fairy doctors and enjoys a quiet life in the countryside of England - that is, until the dashing Edgar, for mysterious...

Both of these animes are Romances. Both also revolves around magic or Fairies. The Romance of the animes are related to memories.

As in Happiness!, Yuma is a male character who plays a role that pretwnds to have no magical power. He is infact the strongest person there. He doesn't use his magic because of his memories against his mother. Haruhi is a girl from his past, And she remembers Yuma from the past as a super powerful mage with power that was very warm and good hearted. That was the last time he ever used his power as he made all the gravity go wack. I just recentally finished this anime, And i really loved the art work in the anime.

As in Earl and Fairy, Lydia has a past memory too. The memory makes it hard for her to fall in love. Edgar is a prince who says to Lydia that he loves her very much. Both Lydia and Edgar makes plans to kill each other thoughout the episodes. Every time either of them plans to kill the other they dont; but instead the events does a 180 and the other does attempt of suiside >_> By Pills, Legendary swords, etc etc

I really liked watching both of these animes, I know you will too.

if you're looking for sweet romance shows, which involves fairies and other magic aspects then look no further, Hakushaku to Yousei and Happiness! are the perfect choices. Both of them deal with the past memories of the main protagonists, both of them are very comedic as well as dramatic at some points. So if you like one of this shows be sure to check the other one as well.

While visiting his hometown, junior high school student Michishio Nagasumi's life was changed forever when he nearly drowned. Though he was saved by a mermaid named San, there’s a catch -- her family is part of a merfolk mafia, and they abide by a strict rule: If a mermaid is discovered by a man, either he or the mermaid must die. That is, unless the...

If you've seen one you will most likely enjoy watching the other. Both have a single girl the main charactor is set on. In both the main protaginist fight an overwelming power to get closer and finally become one with the other in marrage or as a couple. They both also have a serious yet somtimes funny or weird feel about them.