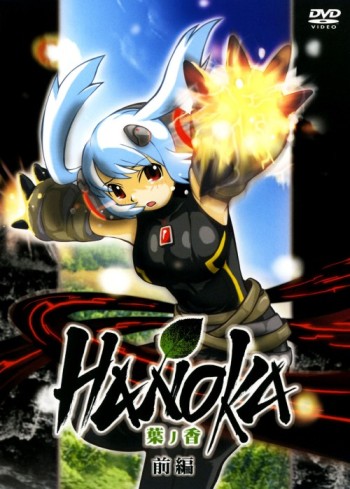 On a distant planet, a war wages between humanity and the extraterrestrial Citizens of the Stars. Humans, in a desperate attempt to drive off their attackers, force enslaved beings known as Majins to fight for their cause. Strong-willed Yuuri is a member of the Superior Soldier Team - a group that is on the front lines of the war. She has been begrudgingly charged with the care of a Majin known as Number Seven - but as the fighting continues, Yuuri and Number Seven grow very close. Humanity is on the verge of extinction at the hands of the Citizens of the Stars; can Yuuri and Number Seven turn the tide of the war so they can be together forever?

StoryI'd really like to start out this review with a quirky statement about Hanoka, but I can't; instead, I'll sum up the series in one word: boooooooooring!Hanoka is a twelve-episode series that spans approximately forty minutes in length, with about six total minutes of recap included. The entirety of the story revolves around the rather tired concept of galactic beings who want to destroy the pestilence that is humanity. But wait! Thrown in for good measure is a strongly-implied shoujo-ai relationship between a generic weapon-being and a human - how original! [note: after writing this review, I've read a few synopses for Hanoka and discovered that Yuuri is commonly referred to as a male. It is extremely damn difficult to tell, and in my opinion she comes across as female; so since there's no way to know for sure, I will continue believing what I think is correct.] It's hard to say more about Hanoka's short story without spoiling, so I'd just like to reemphasize how boring and unoriginal the story is. There is a mild twist about the nature of the Majins, and a bit of (ineffective) tragedy, but the magical loophole (and confusing) ending seals the deal on this anime gone bad. Claymore, Hoshi no Koe, and Saikano are much better anime that have elements of Hanoka's plot, but are far more effective, story-wise. AnimationHanoka is touted as being the first anime TV series to be created completely in Flash - and it shows. I have to give the creators credit for trying something new, but the animation looks flat out terrible. Any animation looks like a paper cutout is being dragged across the screen, and the crude line work instills an air of unprofessionalism. The character designs are easily the most offensive aspect of the animation: they can only be described as horrendously ugly. Number Seven is probably the most likeable of the bunch, though she's a blatant rip-off of KOS-MOS from Xenosaga. The rest of the characters have shading that must have been drawn by animators on acid, as it makes Yuuri look like a pig and the rest of the characters look like they suffer from some form of skin-lightening skin disease. The mouths stuck out specifically with their thick solid black outline and solid cherry red (or white, or sometimes alternating between red and white) insides. SoundHanoka's music would be fine - if it wasn't the same song being played over and over again. I counted approximately two tracks throughout the twelve episodes, but I might be missing some. The oft-repeated track is decent and is reminiscent of playing an RPG, but it does indeed get old. A forgettable soundtrack, regardless. CharactersIs it just me, or is it hard to believe two characters can fall in love with each other after only a short time (and a short number of events) has happened? Frankly, Yuuri and Number Seven's implied relationship seemed completely arbitrary and random - then again, most of the characters on their own seem that way. Yuuri's stubborn and harsh exterior melt away almost immediately after meeting Number Seven, and various minor villains are so forgettable that you wonder who they are as they grace the screen for a second or third time. OverallHanoka is a completely forgettable and pointless anime to watch. The story is unoriginal, the animation is terrible, and the gimmick of being the first flash-animated anime does not excuse the grotesque character designs. Avoid Hanoka at pretty much all costs.

Hanoka might not have reached the infamy of other terrible anime, such as Skelter+Heaven, Abunai Sisters, and Mars of Destruction, but that's because there's a lot less terrible with it than those other anime shorts, which is the best compliment that i can give it. Released in 2006, Hanoka makes the big claim that it's the first anime to be fully animated in Adobe Flash, and it kinda shows. While I have seen much uglier animation, it's easy to tell that this series animation is a bit rough around the edges. The series also has another problem that some short series have in that the OP is way too long. Each episode is roughly 5 minutes at most, and the OP is a minute and a half. More than one fifth of each episode is purely the opening. If it was 10 seconds, there wouldn't be a problem, but every time I skip it, it subconsciously feels like I'm skipping huge chunks of an episode. What little story there is takes place in an indeterminate year far off into the future on planet called Tokinea, where human beings only known as "Inhabitants of the Stars" are attacking Humans on a planet called Tokinea, accusing them of polluting the planet with their technology. Humans have created "Demon Gods", powerful weapons used to destroy the Inhabitants of the Stars. This series focus' on "Demon God 7", known as Hanoka, and the boy who she is teamed up with, as they struggle to fight against the Inhabitants of the Stars. And this brings us to the series' biggest problem. The whole thing feels like the footnotes of a 12-episode series. There is clearly the faintest hint of a plot and characters, but the series is way too short to give any of it the proper depth it needs to be even remotely entertaining or interesting. On top of that, the series has a recap episode. The whole series is just barely long enough for one regular sized episode, and it has a recap episode just over half way through the series. Just why? Unfortunately, due to the Aruji Morino's (the creator of this series) failing health, the series didn't end up the way he wanted, and even he is unhappy with the final product. Maybe someone can pick this up and make it a fully fledged series, but I doubt that's ever going to happen. The DVD actually comes with a couple of touch ups, such as new and extended scenes as well as some rerecorded and new dialogue that add some mild plot to the whole thing. There's even a prologue and epilogue that changes the whole resolution to the anime. So clearly the team behind it knew they had a bit of a flop on their hands, and they tried their best to make it better, but it didn't really work out. As it stands, I can't recommend this to anyone unless someone is looking for an anime that has something even mildly noteworthy about it, like the fact that this is the first fully animated series in Adobe Flash or the DVD has a slightly different version. This one is skippable.

-Story-The story in Hanoka is a jumbled up mess and it is really incoherent. It is also a sterotypical story about a war between humans and aliens over a planet. There were a million moments in which the story followed cliches to the letter. There is minimal originality in this story. Also the ending has got to be the worst ending I have ever seen to an anime series. Terrible does not even begin to describe Hanoka. -Animation-Hanoka was the very first full fledge anime series to be animated completely in Flash. This is a terrible mistake. The flash makes the animation look unnatural, especially when viewing the characters. The faces and heads do not look right at all, and the faces show no expression on them what so ever. I do applaude the makers for trying flash, but it appears that the technology has come no where close to where it needs to be to make it worth while.-Characters-The characters in Hanoka were highly stereotypical and they were bland. The characters had no originallity to them at all. The main male character was gender neutral, and I thought that he was a girl until I found out he was a boy from a third party source. The characters have no depth to them.-Overall-Hanoka is a terrible waste of your precious free time. Spend it in a better way, like stabbing yourself with a dull spoon.