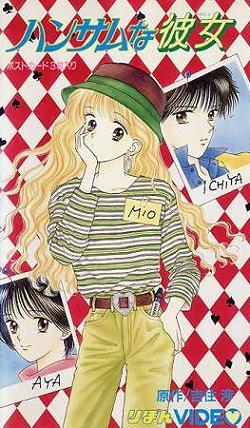 In the present day, a young group of friends is eager for their band to play in an upcoming festival. Unfortunately for them, the stage has been cancelled! Now, they must race against the clock to convince the mayor to let them play their Canary's song... for fame and glory!

Canary and Handsome Girl definitely have different focuses, but I feel both are a good recommendation for each other anyways due to the determination and drive of the main characters to succeed. Both are a short watch also.

Both anime are about pushing to succeed in your dream and trying to get there no matter what. Canary is about a band where Handsome girl is about an idol. Never give up is the theme of the two.

The determination of the young heroines is seen in both Handsome Girl and Canary while they try to strive out on their own and succeed in the entertainment business. The struggles the girls have to endure is portrayed dramatically in these two series.

Good Morning Call and Handsome Girl are both short looks at a budding romance. While neither gives you a large character development or serious plot, both are warm and lighthearted pieces which will leave you thankful for a sig other (if you have one ;) ).

Good Morning Call and Handsome Girl are relatively similar stories consisting of one episode each. Both short stories portray a love between the main characters that is just blooming. Each has it’s own way of being light hearted and expressing joy in young love.

Handsome Girl and Baby Love both are fairly comical looks at budding love. From the length to the older animation style, and generally sappy but touching feel, I think if you liked one, you'd probably like the other.

Baby Love and Handsome Girl are one episode with a comedic aspect to them. The main characters encounter same type of problems and are unsure of themselves as the story begins. The characters learn how to grow with one another and develop steady feelings about what they want.

A classic romantic comedy from the 1980's, telling the bittersweet story of three high school students. The series features very unique storytelling and direction, music from some of the biggest Japanese pop acts of the 1980's, and an added twist as Kyosuke and his family are ESPers, whose powers are used to tell unique stories and put the characters in unusual situations.

K.O.R. and Handsome Girl both focus on a central love theme and the trials and tribulations of that love being unrequited. Handsome Girl kinda glosses over a lot of the finer details, where K.O.R. (being a series) gets the time to go into them. Both are good if you're looking for a bit of a love story :)

Romance is the central and most important theme in Handsome Girl and Ah! My Goddess. Although Ah! My Goddess gives you more time to develop an affinity for the characters, you'll see heart-wrenching moments in each of these anime. I strongly recommend both for the hopeless romantic :)

Handsome Girl and K.O.R. I Want to Return to That Day are both essentially love stories about teenagers looking to the future. There's a number of emotional ups and downs in each, but watching the romances grow and develop makes the ride quite rewarding.

Handsome Girl and Fashion Boy is Cool are both short looks at a quirky romance that probably shouldn't have happened in the first place. Although nothing deep happens, it still is an entertaining watch that won't take up much of your time.

Though Handsome Girl isn't shounen-ai by any means, it shares a quirky romantic plot with Gravitation. Both happen to be related to succeeding in an extraordinary field, as well. If you like romance type series with flair, check this out.

Young Maya’s passion is drama and the theatre -- so much so that sometimes her grip on reality wavers. Most consider her to be a lost cause, destined to live with her head in the clouds… but things change when the legendary actress Tsukikage sees potential in Maya; and when she offers to train her, Maya eagerly accepts. Yet the road to fame is paved with hardship; with strong rivals to test her and close friends to spur her on, will Maya be able to reach her ultimate goal?