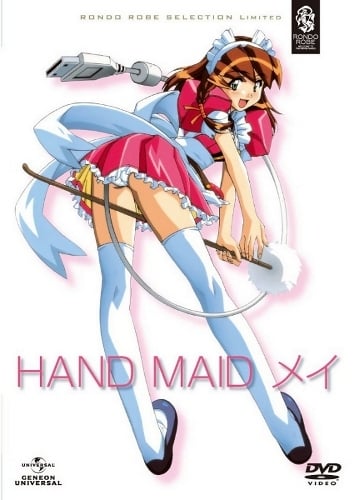 I found the plot of Hand Maid May to be interesting, yet it seemed to be on shakey ground and somewhat predictable. The plot itself is broken down into two main story arcs, one when May was a small Cyber-doll, and one when May was a life sized Cyber-Doll. I found that this split made it feel like I was watching two different Animes and it gave me two conclusions, and two climaxes. After the 5th episode it felt like the anime should have ended, but it continued on. At first I thought it was going to be like the Melancoly of Haruhi Suzumiya, and offer me some lighthearted and fun episodes which could be watched and enjoyed for their stand alone story, but it turned out to be another short story arc. Plus I feel the two plot arcs make it feel like the anime is rushed and makes you feel like you're missing something. However I found Hand Maid May to have a heartwarming story line which showed love, emotions, and cherished memories. Also the fanservice in Hand Maid May was there, but it was not overwhelming or in complete control of the plot. This story also provides great moments of suspense and makes you want to see what happens next.

The animation was ok, but nothing to make a fuss over. I found it to be kind of bland and didn't show much in the backgrounds. Also it looked like at times that the characters didn't show a whole lot of emotion, and at other times too much. The character designs were somewhat original, but felt like I had seen them before.

It’s rather cute in a way, though full of fan service. They do a lot of panty shots along with dressing scenes. Because of this, I wasn’t able to get fully into the story line like I wanted but it also didn’t seem to know exactly what it wanted to do. I felt the story went all over the place until they finally figured out something to do at the end. The poor guy ends up getting a cute girl that will help him with everything he needs. I have never actually been fond of the story line but at least I could stand this one.

It’s a standard harem, where the main character is pretty much a standard nerd that doesn’t stand out and yet all the girls love him. Seriously, the only thing that is different about Saotome is that he’s good with computers and even then, he wasn’t able to figure out that there was a virus on the CD that was given to him. Clearly he isn’t all that smart. The girls are pretty and reminds me of Chi a lot from Chobits although these girls can actually keep a conversation going.

The characters are over simplified and generic. Kazuya is a nerd, who pretty much never had a girlfriend, yet all the girls that see him seem to be drawn to him; Kasumi Tani is a bitchy tomboyish girl that seems to not care if her panties are showing or not with how short her skirts are; and I had to sweet drop when Nandara showed up. He is really flamboyant and over the top. It seems whenever a rich guy shows up, they are like that in these shows. Most of this is very stereotypical of these shows. I’m not really sure about Doraemon’s name and look. He looks like a Digimon and the name is like that as well.

The voices are somewhat annoying in the English dub. I don’t quite like some of the girl’s voices; they are a little too high pitch sounding. In the Japanese, it seemed better though not by much. I do like Nandara, Doraemon, and Kazuya’s voice, Doraemon’s rather more then anyone else’s. It’s just perfect for an android or robot. The music is way too cutesy for me, and sometimes seems not to fit the show sometimes. I think a little more techno would work better. All in all, not the best show in Japanese, worse in English I feel.

This anime was pretty nice it was funny and cute. It had a decent plot line and didn't nearly have as much ecchi as i thought it would (thankfully). Nothing sad really went down. Plus there's actually 11 eps though one didn't air technically but i found the whole anime on http://www.watchdub.com/english-dubbed/hand-maid-may/  but episode 11 was somewhat of a filler type episode but it was pretty cute and hetic,plus it gave us a bit new information to grasp. Watch it it you guys like~

Dollar store Chobits but a harem. Not bad at all. It rounds out to 8. I love it. I recommend it if you like love between man and machine

Hand Maid May is a anime which I enjoyed very much its charcters and humour being something which i could relate to. Its not ovely ecchi despite being classed so I admit it does have it to that extent but thats not really the main piont in the story.

The main point in this story is to the development of relationship between humans and humanoid robot/androids. In this way it is kind of like Chobits but takes it in a much lighter perspective and even takes it to the point of androids gaining emotions. It even goes to say that the robots may pontentally bear live young from humans. How ever in this anime the thing i ahve noticed are there are abosolutly no male robots.