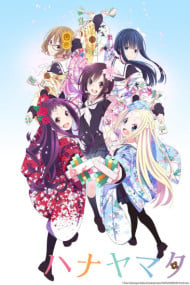 Naru is a high school girl who is average in every way. She loves fairy tale heroines, though she’s never had the courage to escape her ordinary life. One day, she sees Hannah, a transfer student, dancing in the moonlit and becomes inspired to learn Yosakoi dancing.

What I Liked: The character designs were quite pleasing. Sally-chan-sensei. The Yosakoi shop owner, who was woefully underutilised. Backgrounds and set-designs are all gorgeous, and the show has this wonderfully soft and relaxing colour scheme to it. The subtle character development for all the main girls, especially Naru and Yaya (even if she did start of as a bit of an arse). What I Didn't: There was a lot of needless clichéd melodrama in the show, especially in the later half, making the whole thing tonally inconsistent. Some episodes jumped multiple times between dramatic and happy scenes. A lot of the events surrounding the final episode's Yosakoi festival felt plot-convenient (i.e. registration closing, but being open at the event). Not much focus spent on Yosakoi itself. Hannah's whole parental situation subplot. Yosakoi scenes are mostly stills, except for the final major dance. Final Verdict: For a show about cute girls doing cute things, Hanayamata felt less like a cute and breezy high-school comedy and more like a massive slog through a mountain range of melodrama, clichés and fluff. Still, at least the journey was visually pleasing with some of the nicest pastel visuals and cutest character designs I've seen for a long time.

What got me interested in this show?  I trace it back to the first season of Shugo Chara! and the character of Nadeshiko/Nagihiko Fujisaki, the boy who assumed the persona of a girl to learn traditional Japanese dance.  This series introduced me to yosakoi, a combination of traditional dance and flash mobbery.  Rows and rows of dancers in perfect synchronization, decked out in full costume and carrying simple hand props as fans, umbrellas, or percussion instruments.  Elaborate routines involving a lot of practice and commitment. Hanayamata is named for the five main characters that make up a middle school yosakoi club which has been formed and is running through all those phases of acceptance, finding support from members, the needs to meet school requirements yada-yada.  Each character displays a unique personality that causes the club to stumble about as each dancer shows what strengths and weaknesses (and the weaknesses are what makes the plot go ... or sputter) make her click.  So, it's best to meet each of them. Hana is a transplanted American girl (and a Jersey girl at that!) at the middle school and is still finding difficulties in adjusting to the new scheme.  She is an exuberant spirit with a dash of step-on-toes tactlessness.  She is in love with Japan, but she’s also hopeful for a reunion of her recently divorced parents.  In her drive to gain a team for yosakoi, most girls in her class avoid her, except for ... Naru, who first meets Hana one evening at a shrine dancing with almost superhuman ability.  She is impressed with Hana, but Naru is a timid soul with a deep yearning to find that 'dazzling' inside her, the thing she most wishes to excel in.  But the shyness which controls her has always made Naru vulnerable and clumsy.  She has always needed the support of ... Yaya, who is jealous of Hana's interest in Naru.  So much so that Hana calls Yaya a 'tsundere,' grumpy on the outside, marshmallow soft on the inside.  Yaya has other interests, including being on a successful rock band as the drummer, but wishes to help Naru make the club official by becoming a nominal 'member' of the yosakoi club, the fourth because of ... Tami, the vice president of the school council who has been supportive of the yosakoi club even though teachers and council members have frowned on the formation of the club.  Perhaps, she joins due to her father who pictures Tami as the perfect 'Japanese maiden.'  Trying to please father has been Tami's goal, but as this has been difficult after being forced to stop ballet, Tami decides yosakoi is a new direction for her.  Her position in student council makes it easy for her to convince the president of the council … Machi to join as the fifth member.  Machi is stubborn, hard-driven, and hard-working.  She has an axe to grind with Sally-sensei, the club’s advisor, and douses the yosakoi club with red tape to hamper, even stop the yosakoi club.  A complex back-story explains her hostility to the club.  But once that’s resolved,  yosakoi allows her to enter something in which she needs to put this drive and determination to work. Knowing these five characters makes it important to create the theme of teamwork and unity as the club bungles along.  Finding an advisor, then losing her, then getting her back (over Machi's protests).  Striving to perform at a local yosakoi festival, then not registering for it.  Losing tempers over clashes of personality or style.  All those profound introspections which embarrass Naru as the shy girl begins to emerge from her cocoon.  Losing Hana to America as her mother comes to Japan to bring Hana back home to New Jersey  Getting her back at the last moment as the girls perform at the festival.  All leading to the bonds of friendship of five diverse girls with differing backgrounds whose only wish is to always dance with each other. The animation limps, however.  I was hoping that the yosakoi scenes would have been spectacular.  The yosakoi scenes are static, more like poses of the girls in costume as they sweep and freeze position.  There is more effort made in those clumsy moments during practice, but often the action moves from picture to picture as the girls prepare for the day of the festival.  The plot moves forward in jerks, running into that predictable complication which ends the episode.  And the complication is usually resolved shortly into the next.  The key problem with the girls is their hesitancy to discuss their personal problems, from Naru's history of choking in performances to Hana's sudden need to go home with only one week before the festival. All in all, a great piece of Iyashikei, if all that warmth and affection overcoming obstacles is all you need to say, 'Great job!' 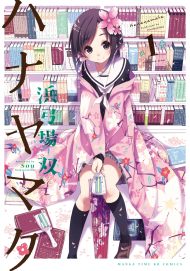