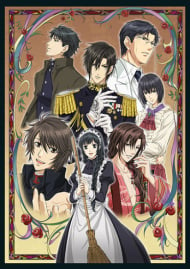 Hanayaka Nari, Waga Ichizoku is a reverse harem anime based on the otome game with the same name. For those who don't know, otome games are kind of like dating sims/visual novels geared towards a female audience. The content is usually romantic in nature, with the player having to choose between various male characters and getting them to fall in love with you. And they usually make for really bad adaptations. This title is certainly not an exception. StoryHaru Asagi just started her job as a maid in the Miyanomori family to support her sick father. When the family head unexpectedly announces his retirement, a bitter fight between the sons break out to see who can succeed him. Whoever makes their father the happiest wins the seat. There's a reason why otome games make for bad anime. The whole point of the game is to delve into one particular character's story. As a player you get to choose your love interest and the way everything unfolds. But an anime isn't interactive of course. And when promoting the source material, you have to showcase all the different boys, right? Hanaya Nari tries to solve this by having little arcs within one episode to highlight one of the male characters. As a result the overall story feels rather disjointed and all over the place. The fact that it's utterly bland and boring (you know, the dime-in-a-dozen type) makes matters even worse. The ending seems to hint at a bigger plot, but that gets cut off before it even starts, leaving me to wonder why the heck they wanted to include it inthe first place. In the end, I didn't feel like it left any kind of impression on me at all. AnimationIt was okay, nothing breath-taking, but not (too) bad either. The character design was typical for something of this genre, which means a lot of pretty boys in pretty costumes. 1920's Japan was quite alluring and the scenery managed the set a good mood. There was the occasional derp face and a lot of still images, but it didn't pull me out of the story. SoundLike the animation the OST was pretty average. Nothing really stood out to me, but it wasn't distracting either. The voice-acting was, again, okay. As expected, a lot of deep, sexy man voices to make the ladies swoon. I enjoyed listening to the voice-actors, though I'm guessing these kind of roles don't really demand much. Hiroshi had the most annoying voice imaginable though. The kind of nasal type of voice that's just grating to hear. CharactersDefinitely the anime's weakest spot. Like I've said in the Story section, the appeal of otome games is choosing one guy and getting to know them. At the beginning they all seem like douchebags, but once you explore more of their backstory they become (somewhat) more sympathetic (usually). But an adaptation (a two episode OVA at that), doesn't give you enough time for that. So everyone is basically stuck in the douchenozzle-fase. Half of the cast are sadistic bastards and the other half are as bland as dry pasta. I wanted to punch every single one of them in the face, especially that little asshole called Masashi. Keep in mind that you're supposed to fall in love with them. Yeah, no. To sum it all up: Tadashi is the douchebag with glasses, Isami is the douchebag in a military uniform, Shigeru is the weirdo with long hair, Susumu is Mr. No-Personality-Nice-Guy, Hiroshi is the childish/caring dude, and Masashi is the biggest little prick of the whole show (though Isami is also up there). Go ahead, pick your poison The main character wasn't too bad, there are certainly worse shoujo heroines out there. She's still pretty clumsy and clueless, but more in an endearing than an obnoxious kind of way. As she has to function as an audience insert, personality is practically non-existent. She's sweet and a pushover, that's as far as we get to know her. OverallI can't say this is bad, because it's not bad per se. The animation, sound and story are all pretty okay, nothing made me want to scratch my eyes out, albeit everything was utterly generic and uninspiring. If you're not a fan of the genre, then this anime will definitely not change your mind. If, however, you're looking for some mindless entertainment with a cast of bishies, then I guess you could spend two hours watching this OVA. But then again, there are way better shows for that out there.

Short reverse harem anime. It builds up and then you are left wondering what will happen next.

I honestly wished that the animators would commit to this ova and would make a full on series from the otome game, just like the animators of Amnesia did. this is one of the few otome game made into anime that I really wished for more when they gave only a small taste of an actual good anime plot for a romance. The Harem overall are what you expect from underdeveloped characters put into only 2 episodes and the heroine is cute and bubbly. Honestly, probably one of the best female heroine in a reverse harem vs. other reverse harems from otome games. This is something I would recommend  if your looking for a quick cute anime, although it is  short its not a bad ova series.