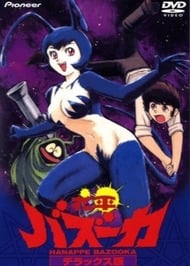 StoryIt's easy to dismiss Go Nagai out-of-hand. His work is puerile, his characterization non-existent, and his art sloppy, but anyone can achieve these lows of quality. Nagai, on the other hand, frustrates, enrages, and offends because when a viewer takes time to consider his work he can see where his stories might have legs--had not their author been too obsessed with breasts, stupid expressions, and wanton violence. Encouraged to give him a second shot by an apologetic review of the Devilman manga, I fired up Hanappe Bazooka only to discover one of the most poorly executed anime I've ever seen. In its frenetic forty minutes Hanappe Bazooka tells a confused yarn about a hapless boy, Hanappe, who summons a pair of depraved demons while choking the chicken in the privacy of his own room. Granted massive physical strength and the power to command any woman to sleep with him by his newfound friends from beyond, the young student wrestles with the moral implications of "might-makes-right" and watches as his family falls victim to the myriad temptations offered by the demons. While these events COULD have served up a number of excellent parables, Nagai abandons it all to show tits and violence. Like a teenager who discovers his older brother's porno collection, the narrative bounces around with only its hormones to act as a guide. Gory confrontation with bullies? Check. Lowbrow transvestite joke? Check. UFO? Check. As the OVA scampers around panting at anything naked, scatological, or violent, any sympathy for the hapless Hanappe evaporates under the show's hummingbird-like pacing. Nagai pauses only twice for introspection and both times, he reaches the conclusion that women are amoral monsters who seek only their own pleasure. Sure, I have a penis, but I'm no misogynist, and this revelation strikes me as both shallow and sick. Unlike Kanokon ~Manatsu no Daishanikusai~ which left me annoyed, or Itsudatte My Santa! which made me want to punch Ken Akamatsu, Hanappe Bazooka merely makes me feel sorry for its creator's stunted emotional development. Though started with a kernel of a good idea, the resulting dreck shows grievous damage at the hands of a short attention span and an overactive libido.AnimationGo Nagai certainly deserves two points for creativity, but that's all. The floating space fortress, immense goddess, and bevvy of characters from his other works that flash on screen during one scene form the highlights of the OVA. Sadly, not one of his main characters stays on-model and the movement makes me nostalgic for the flip-books I used to draw in the margins of my middle school math texts. Combined with Nagai's silly expressions and inconsistent use of chibi characters, Hanappe Bazooka's animation proves to be nearly as confused and slipshod as its storytelling.SoundThe voice acting at times overcomes the confused plotting, strange situations, and inconsistent animation and provides some of the otherwise lacking characterization. Dance's sultry murmurs and Bazooka's deep, throaty proclamations balance the whining tone of Hanappe perfectly and the real failure instead comes from the sound effects. The poorly, executed and low-budget incidentals don't always sync with the action and sound muffled in some cases.CharactersMuch of the "what just happened?" feeling of Hanappe Bazooka comes from its haphazard character development. That many of the people in the anime change personality on a dime should come as no surprise to anyone familiar with Devilman, but here it particularly nettles as it draws additional attention to the hyperactive pacing. As a protagonist in a parable, Hanappe fails to either provide a convincing platform for the lesson or elicit any sympathy. He transitions far too quickly from hormone-driven loser to pillar of moral strength for the change to be believable; consequently, nothing Nagai does to him provokes any kind of emotional response. Across the isle, Bazooka and Dance proclaim their flat personalities during their first appearance, but when the story then tries in its waning moments to pin its narrative hopes on the sadistic female demon having a heart, the OVA oversteps its bounds.OverallSomewhere in Hanappe Bazooka might lurk a decent story about depravity, temptation, and the imperfection of man. Coupled with a Lovecraftian sense of suspense and careful eye for character development, this story could have been halfway decent. But that's not the case. Go Nagai instead turned his clever seed into a half-hentai trainwreck that you would do yourself a favor to skip. 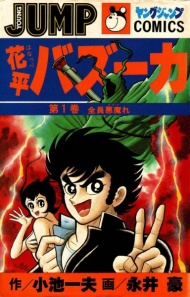