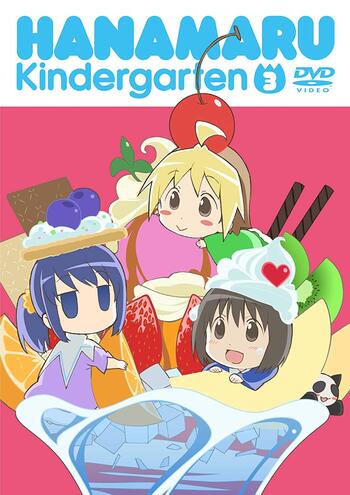 Hosaka-sensei no Ai no Muchi

"Why are your proposing to me?!" Karen Kawai has a problem with the way she looks. No matter what she does, she still looks scary. As a nursery teacher, she inadvertently makes kids cry every single day on the job, entirely due to her face. Into her troubled work life enters Hosaka, a cool and collected man who seems good with the children. While she welcomes him, Hosaka told her one day, "Moving forward, I'd like to work together toward marriage."

Brought up by two strict teachers, it was only natural for Sakamoto to pursue the same career path as his parents, and after years of study finally sets foot in a high school as a fully-fledged educator. Only problem is, he's only now just realised he really, really, really doesn't want to be a teacher! Thus starts Sakamoto's frantic search for any opportunity to resign, from starting scandals to showing his unprofessional side at work. But he's just that good of a teacher that they're not willing to let him go! Not to mention his eccentric co-workers, the bespectacled Nanba-sensei and the ditzy Shiina-sensei, just adore him. Will Sakamoto ever find a way out of this living hell?

The everyday life of a very short (141cm) yet large breasted school teacher, Watashiro Riko, whom her class has nicknamed Loli-sensei.

The story follows Iku Fukuda, who likes working with kids, so he gets a job at a day care center. When he realizes there's a gap between his expectations and reality, he quits after 2 months. But Fukuda doesn't give up on his love of working with kids.

Even though Rumi now has become a mother, days of observing Makuru, her son and "his" childlike enthusiasm are not over yet. Meanwhile, the father is...?

High school student Shuto is looking forward to being free and at ease while his parents are working overseas. Only problem is, things don't exactly go as planned when he finds a 5 year old girl in his house. As it turns out, the girl's mother is a colleague of his parents and is traveling overseas with them and has left her daughter in his care for the next 3 months!!