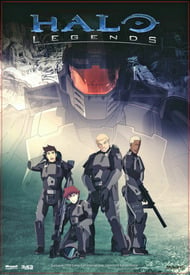 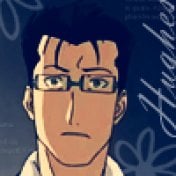 Let me begin by telling you that I am a Halo fan. I've read the books up to Contact Harvest and played the games up to Halo Wars. Having said that, I am no stranger to the Halo universe, and feel qualified to give this review.StoryWell, Halo Legends doesn't seem to have much of a coherent story. It's a collection of random events in random time periods that are pretty much completely random. They are stories that are pretty much all made up just for this project.To make matters worse, these episodes frequently contradict and vastly over-exaggerate all aspects of the Halo Universe. SPARTANs are depicted overpowering Brutes (which didn't seem possible in the book First Strike), and a single elite can fight an entire army single-handedly in an open field. Things are just so unbelievable that even a Halo fan like me just has to stop watching.CharactersThere really isn't anything to be said about them because they change every 30 minute episode, thus removing any depth to any character. It's just a bunch of people having cool fights that all feel meaningless.OverallI've been struggling through this review to keep a professional attitude, but the real truth is that this show SUCKS MASSIVE BALLS. You don't get time to care about the characters, and combat is so exaggerated that it feels like watching Superman beat the snot out of a 3-year-old. Honestly, Halo Legends is bad, and the producers should feel bad, and you should feel bad for even thinking of watching it (like I do).

To begin with, I am a major Halo fan. I have all books and games and just had to get this movie when I heard about it. Now, there are a few similarities in each of these short movies. First of all, the Halo games' great sound carried over to the movie, which was a great plus, and helped make it a good watch. Character development was good overall considering the time length present. Overall, Legends made me think of an animated version of Halo: Evolution. The lack of time in each episode was a let down, as I was hoping for eight regular length episodes. This aside, I'm now going to look at each one closely, as animation varies greatly, and to me, this is what makes it an anime.Origins I and II     4/10   A comentative history document that started good, but, and especially II, became fill-in shows worthy of the History channel. I did enjoy the first one at least, though. A nice look at the forerunners up to present, explaining things. Animation was of a good quality, although the battles were lacking.The Duel        3/10   Worst. The worst ever. The story itself was nice, the battles amazing. I liked the origional story, which developed a look into elite culture. Wait, why did it score so low, then? Animation. Moving water colors is not anywhere near good animation. The graphics over all were terrible. Anything I say about the plot will not be a spoiler.Home Coming     6/10      I truely enjoyed it when I found an actual anime episode. Half a battle, half a flash back to one spartan's life during training. It was nice to see how she reacted to what happened to her. The battle was of great quality.Odd One Out  7/10   You might wonder wh it was so high. Answer is the fact that it was an anime. This coupled with the story staring an idiotic spartan in a comidy short that had me laughing. The battle was amazingly classic style anime, making it very enjoyable.Prototype  8/10    This was a great short. A character develpement that reminds me of Evolutions, it was a very good watch. It was a nice change to see a non-spartan story for once. The animation kept it as a real anime, and the battle sequence was amazing, remanisint of gundam fights.The Babysitter  10/10    Maybe even my favorite, this made a great show of the ODSTs' opinions of spartans. Great animation and battle sequences. Short but enjoyable story.The Package    9/10   One of the better ones, thanks to the long and amazing battle which is the main portion of this movie. I also enjoyed having a face to put to Halsey for once. The bulets at one point falling like there was gravity in space was an odd anoyance. That along with what seemed like a mix of cartoon and Nightmare before Christmas style graphics lowered the score.