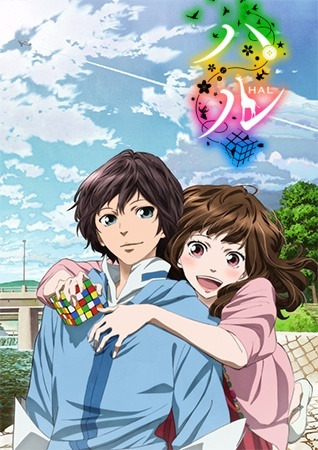 I'm not making this recommendation because these movies match thematically, because they don't. Hal is a move about the loss of someone beloved to you and Hotarubi no Mori e is about a childhood friendship.

Nay, I recommend these together because they are emotionally tied. Both are beautifully animated poignant and moving films that tug on the bittersweet heartstring and either will leave your emotions touched tenderly. Both evoke feelings of wistfulness and yearning. If you enjoyed either movie, the other will surely summon a similar feeling for you.

Along with great visuals, Hal and Hotarubi no Mori e both tell bittersweet tales of a romantic relationship between a human and a non-human. Despite some thematic differences, I think fans of one would enjoy the other.

Having watched these two films which almost left me in a state of tears - Hal is about a boy who goes to help a girl have a normal life once more. The boy is left feeling conflicted about the other and tries to help her in anyway he can (trying to feed her and clean up) however making blunders along the way. In Hotarubi no Mori e there is a boy who helps a girl escape a forest and go home. However not being able to touch her means troubles tend to arrise ( her falling out of a tree).  Both films at the end leave a bittersweet taste inside your mouth because their only intimate moments are followed by sadness.

Honestly these films are some of the best films I have ever seen and I'd fully recommend to at least see them once. I hope you enjoy both of these films as much as I did. :)

Hal and Eve no Jikan both explore the emotional bonds between humans and adroids. Both contain beautiful animation and a similar delicate emotional atmosphere. If you liked one, the other will definitely give you more food for thought.

Both have a serious take on the android-drama genre, both have lush animation styles, and both will tug at your heart strings.  They are, in many ways, a perfect pairing for a cyborg double feature.

In both, Androids are used as replacements for people who have past away. These stories are both heart wrenching and beautiful depictions of robot-human relationships.

Both of these anime involve a society where people have turned to relationships with androids to heal their loneliness. Both are heartfelt stories about a human who falls in love with a robot.

Hal is movie taking place in japan if folllows the life of two charaters Hal and Kurumi. Hal has a great story will great with plot twits that are impossible to predicted. One major point which connects Hal and Time of eve is the story line and genre, some similar tags both moveies share are:

Both anime are dramas that focus on the relationship between humans and androids. They are fairly slow paced with a few heartwrenching moments.

Although the settings differ a bit, Plastic Memories and Hal both show us the strong connections and memories that bind humans to androids. Both shows have a similar emotional atmosphere, with plenty of sad and touching events.

Both anime feature a romance between a human and a human-like android.  While the plots differ, both anime have touching moments and are very sad at times.  If you like one, you will probably like the other.

As Sumomo berates Kotoko for not getting into her morning exercises, Hideo leaves for college but manages to leave his wallet behind. After sending Chii out in a schoolgirl outfit to deliver the wallet, the ever-lively Sumomo realizes that something is wrong… Chii has left her panties behind! Now in a fit of panic the two teeny androids must find a way to escape the house and reach Chii before any rogue gusts of wind expose her naked truth.

Although these two don't seem to have much in common plot-wise, both movies left me with a bittersweet feeling in the end. They're really good love stories with little bits of sci-fi, that'll not leave your heart untouched.

I have noticed some similarities between these two, particularly in their sci-fi and mystery aspect. Both animes starring artifical beings/dolls (DTB) and android/s(Hal) who carry out missions. Both have memorable characters, thought provoking plots and interesting dialogues.

Maybe this recommendation is not quite because of the storyline. its more because of the main characters... if you love to see Kou and Futaba's relationship in Ao Haru Ride.. You might wanna watch Hal. KouxFutaba is very similar to HalxKurumi.. not only they look similar but the kind of relationship is bittersweet. Personally, I feel that KouxFutaba acts as the back story of HalxKurumi.. its like what if they went to school together..

One day, while Keiichiro is out at a job interview, Flower decides that she’d like to do something nice for her master to make him feel better. After seeing a cooking show on television, the naïve android decides to head the shops to buy some vegetables. But will she be able to find the ideal ingredients that will revitalize the tired Keiichiro?