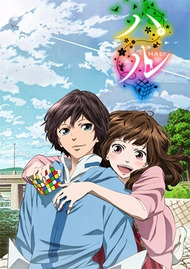 Hal and Kurumi used to be lovers with dreams and aspirations, until one day a tragic plane crash tore them apart forever. To help mend his grieving granddaughter’s heart, an old man sends his android, Q01, to take Hal’s place and help Kurumi move on. But doing so won’t be easy, for Kurumi is resistant, and the android Hal will slowly come to realize the truth about the pair’s relationship...

Hal is a one hour movie about a robot made to become human to comfort a girl, Kurumi, for the loss of her boyfriend. The girl's grandfather, unable to go on seeing her suffering and shutting everyone out, decides to make his robot an exact replica of Hal, the deceased boyfriend - hoping that all this will, in some weird way, relieve her of her pain. The visuals are lovely: the colours and drawings and the blending of traditional and CG animation all give life to something that's extremely pleasing to watch. I also think the music fits well with what's being narrated. And the voice acting, too, striked me as well done. As for the story and characters, that's where I gave this anime lower marks. Even if I'm not exactly sure why I feel the anime is so lacking in these aspects. The characters are likeable enough;both Robot-Hal and Kurumi are sweet. And the story, even though simple, is a good one. There's a plot twist that you don't see coming and quite a few flashbacks to give you some insight in Hal and Kurumi's relationship. There isn't obviously time to develop the characters much, but it's kind of funny and amusing to see how Robot-Hal asks questions about the real Hal and how he tries to make sense of human feelings and relations. So what's missing? I don't know. I am aware that in a review you should motivate. But I just feel that something important is lacking and whatever it is subtracts something fundamental from the overall value of the anime. Why should an android replica of a dead person help those who stay behind feel better? That's the first flaw I can think of. Just recently I saw a similar concept carried out in a British tv series, Black Mirror, but in that case predictably enough the woman after a short while started being revulsed by the fake replica of her partner and the comfort she had initially found was replaced by an even greater pain. In this anime however they seem to hint that Robot-Hal becomes human - but you can't even start wondering at the implications of that (and as a matter of fact there is no mention of this topic in the anime) because that isn't how it is. So in the end maybe the anime deals with the grief for the loss of a dear person and how to overcome it. But that final plot twist I mentioned earlier makes it also difficult to justify this kind of interpretation. The only thing that I thought was a significant clue as to what the creators of the anime were getting at was when the grandfather says that in his opinion dead people don't go anywhere but stay with you and then he adds that he often talks to them about the most mundane things: how delicious a meal is, how hot a day is; save for the fact that he is made to notice that that is exactly like talking to oneself. It's a bit lame.  Maybe I just don't get what message they wanted to get through.

How do we handle a grief so extreme that it breaks you from reality? How do we help someone come back to reality to help them start healing? This is a beautifully animated movie about how to answer those questions with robotic therapy. The sound was crisp, clear and symphonic consistently and matches perfectly when truths are revealed in the wake of another tragedy. Healing is learned and grief is brought to a manageable, coping level.

You know the surefire way for an anime to win its way to my heart? Have a bittersweet love story that makes me cry. Well, apparently the creators of HAL know me all too well. Story How do you cope with the loss of someone you spent every waking moment with? After the death of her boyfriend, Kurumi holed herself up in her house. Not wanting to see her suffer anymore, her grandfather decides to get her a robot that looks exactly like Hal. Reluctant at first, the girl slowly opens up her heart. When reading the synopsis I didn’t really know what this movie would be going for. Is it going to be a kind of impossible love story between android and human? Is it going to address how people can/can’t simply be replaced? In the end HAL turned out to be a story about learning how to move on. The movie has its fair share of twists and turns that may not really surprise the attentive viewer, but will surely make you jump out of your chair, going ‘Whaaaat?’. The pacing felt really nice and there was never a dull moment, even though you could call this a rather slow-paced movie. I loved how the Rubik’s cube was used as a way to tie the plot together. Unfortunately, there were some plot points left dangling at the end with a few hints to the past of several characters that I would like to have seen explored. Even so, I felt that it wrapped up pretty nicely and the ending was satisfying nonetheless. Animation Wit Studio is fairly new to the animation industry, but are definitely a force to be reckoned with. You know, being the ones to produce Attack on Titan and all that. The animation for HAL is beautiful to look at. There’s a nice blend between the traditional stuff and CGI, making it not stand out too much. If there’s something I hate, it would be ugly 3D models in a 2D world. There were some really interesting shots and camera angles and the way they made the water look was amazing.   Anime food always looks 4.2 times better than real food. Fact. Character movements were well animated and had a certain charm to it. I don’t know why, but I really liked how they moved. Like everything else in the movie, it was just very cute. Sound The OST was composed by Michiru Oshima. I love her work, but her pieces have a tendency to be a bit overbearing. While a lot of the BGM was really good, some didn’t really fit the mood or were somewhat too powerful. Having said that, when the music did blend in with the story, it certainly managed to elevate the scenes to a higher level. The voice acting was very enjoyable. I had only heard Yoshimasa HOSOYA in more stern roles before, so seeing him pull off a cutiepie like HAL was a pleasant surprise. The other voice actors did a pretty good job as well. Characters HAL is the sweetest guy ever. From the moment he first appeared on screen, I knew I would love this character. He has a charming innocence going on that really just melts my heart.   Look at this adorable little punk Kurumi was really cute as well. Seeing these two interact almost gave me diabetes. Even for a short movie like this, I felt their characters were rather well developed. There’s definitely more to them than first meets the eye. Also present is a colourful cast of minor characters. Little kids, a bunch of old ladies, a rather peculiar scientist, a dangerous childhood friend and a caring grandfather. Though they don’t add much to the story, they’re pretty fun to watch. Overall In a mere 50 minutes runtime, HAL manages to stir up tons of different emotions. It’s a movie about learning how to cope with loss and moving on.  About remembering the past, but not letting it take over the present. The story is more than just that of a lost love and after finishing it, you’ll probably want to watch it again. Simple, heartbreaking and yet all warm and fuzzy as well. HAL is the perfect movie to watch on a rainy day. 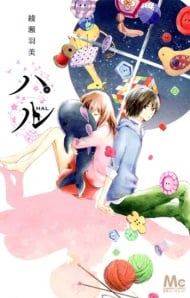