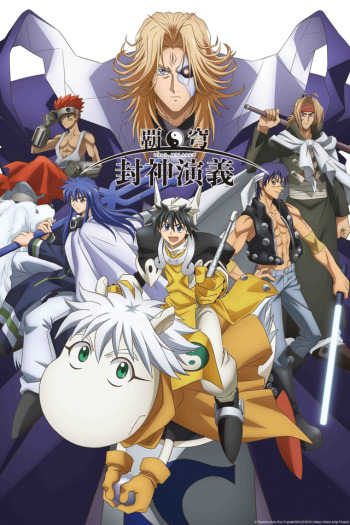 Raised by cats until he was five, Yamato Delgato's only dream was to play B'Daman - the official sport of the B'DaWorld. His dream comes true when he's chosen to wield the most powerful B'Daman ever, the legendary Cobalt Blade, as only he has the skills to harness its power. This is his journey into the world of B'Daman as he learns valuable lessons and also tries to save the B'DaWorld from the evil clutches of the Shadow Alliance.

Aster is a young boy who dreams of becoming the greatest mage in the kingdom. Only one problem–he can't use any magic! Luckily for Aster, he receives the incredibly rare five-leaf clover grimoire that gives him the power of anti-magic. Can someone who can't use magic really become the Wizard King? One thing's for sure–Aster will never give up!

In the midst of an adventure to find Sakura’s feathers, the gang is transported to a world called “Birdcage Land”. At first glance, it looks like a peaceful place where people and birds live together, each person having a lifetime bird companion; but beneath the façade is a terrible truth: Princess Tomoyo and many citizens are hiding from the evil King, who wants to use Tomoyo’s powers send the world into eternal darkness. Sakura and her companions decide to help the people fight against the tyrant and rescue their bird companions which have been kidnapped. Can they restore peace to the land?

After the defeat of the Shadow Alliance, Yamato is in search of special B-Da Balls called Strike Shots, which originated from shooting stars. After a fight with the mysterious Haja and he obtained his Strike Shot, the Drive Shot, Yamato then met Gunnos, a rookie B-DaPlayer and got his own Strike Shot to participate in the Winners Tournament along with Yamato's old friends and rivals. But little they know that a terrible evil is about to put the B-Da World in peril once more.

On present day Earth, the brotherhood of humans and demons (youkai) has been broken. A corrupt and evil demon, Gyumao, is performing experiments that combine human science and youkai magic, causing all demons to go crazy. Now, Genjo Sanzo, a trash-taking Buddist monk, is given a mission: Deliver a sacred scroll, the Maten Scripture, to India. For the journey, he is teamed up with Son Goku, a 500-year-old demon, Sha Gojyo, a red-eyed half demon human, and Cho Hakkai, a school teacher turned demon. Together, the four of them must travel to India, but the road ahead will surely be full of speed bumps, and demon attacks.