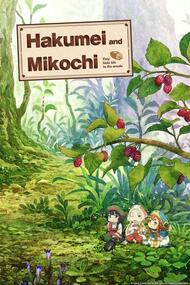 While Hakumei is cheerful, outgoing and prefers to be outside, Mikochi is more introverted and prefers to stay indoors. These differences will set the tone for their friendship. Riding on insects and birds, creating tools from the forest and living their normal lives, they'll show us how day to day chores can be the biggest adventure in a small world full of wonders.

A very small slice of life. Hakumei and Mikochi are adorable girls doing cute things in a fantasy-like world full of talking animals, and this short series explores the smaller details of their everyday lives in this world. THEY'RE VERY SMALL. The typical fantasy world is scaled-down in a charming story-book way for this show. The world is pretty interesting and has a lot of well thought-out parts and pieces that makes it feel really alive, like the world we ourselves live in, just scaled down- but you can still really feel the scale. Even smaller and more behind the scenes are the intricacies of how this world works. A little ways in we're introduced to a sort of necromancer who uses music to control skeletons, and it's something that you just wouldn't have thought of that makes this world all the more interesting. The shot composition makes it feel like the world is so much larger than our focal characters, the angles and everything never let you forget that, which is always charming, they're always put next to recognizable things that let us see how much smaller they are. Everything we'd see in real life is more spaced out and the details are larger. It's really nice to see the level of attention put into the art. The backgrounds themselves are just amazing, I love them. The animation and art itself is done by Lerche, and they've captured the feel of this world as intended perfectly, bringing animation's own flair to it. It feels like a children's book, but with real work and time spent on it, like a loving grandparent/caregiver wanting to make a genuinely quality and enjoyable story for children they cared for. The feel of this show is consistantly warm. The music is well-fitting too and just adds to that warmth. Even the very first episode, I got chills from how well-paced it was and how well the music fit with the situation. It's a slice of life though, so if you're not into that, you might find this anime boring, and sometimes, it is a bit. It gets a bit too wrapped up in itself to tell a decent story every once in a while, but it's not a total downfall. The character designs are awesome, and lerche has found a way to characterize them as they always do but incorperating smaller movements to give them personality. Hakumei is the more outgoing, passionate one and it shows in everything she does, Mikochi is the quieter, more precice and calm one, as shown by her design and everything she does. The animals also get this level of characterization while still acting believably as animals. The characters also have an aspect of them that feels very human, very real, but still in scale with their world. The animals will wear clothes and sunglasses, they and the other creatures will go out drinking together, it's all very real. The story is episodic, and they all have a bit of continuity too. I like episodic storytelling and this does it pretty well, every episode has a memorable difference you can assign to it and they're all decently enjoyable, a few outshining the others in terms of what's accomplished. The two work, gather, cook, meet and help new people, and just generally have a cool life in their small world. If I had one big complaint it would be the use of manga-ish panels during the scene changes, showing small movements during moments of dialogue that don't really work to me. I feel like it would be better used when there isn't any dialogue, because it distracts from everything else. That's the show's biggest problem for me.

Daily life of Hakumei and Mikochi in society where fairies, talking animals and bugs live together. Very peaceful and interesting show, would cladly live in a world like the one in the show. Didn't initially care for this show, but it totally won me over as I kept watching. Adventures of Hakumei and Mikochi are cute, fun and sweet. Can't wait for continuation. Animation is great all around. Sound's great, relaxing and fantastical. No human characters, yet everyone feels more human than you'd think.

This anime is my top 3 iyashikei anime and top 5 of overall favs. If you don't want to feel cozy or dream about being tiny and living in a tree, don't watch this. If you want the ultimate cottagecore, look no further. Dubbed or orig, both are great. 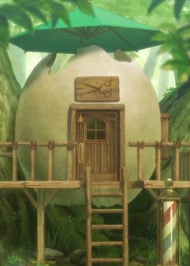 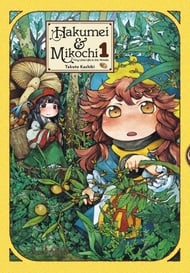