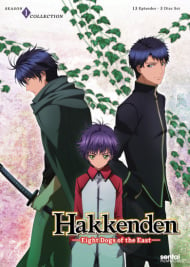 Nothing about this show stands out much from average.  Shino is an annoying, disobedient, overly angry, spoiled, and faux caring brat.  He pretends he is a hero and cares for others but if others are hurt by someone he knows (sort of) or rather a negative version of someone he knows, he does not seem to care or have any kind of satisfactory or realistic reaction to such abominal crimes.  This makes the story and especially the drama aspect fall very flat.  Not enough edge to drama when the hero doesn't seem to care that his foe is a dispicable monster and never responds in a manner befitting revenge or justice or to save others who are so adversely affected by this monster (or the prime motivators for fighting evil).  The story primarily centers around Shino and Sousouke, his erstwhile adoptive foster brother.  The flashback montage is very vague and cryptic, it could have used more solid footing.  Every other character is no more than a support character though we do get quite abit from the shadow monster, Satome, and the two demons, and somewhat Hajime but aside from the first couple episodes, her story becomes dull and uneventful and rarely intersects with the major theme or plot of the series itself.  I would almost say the same incompetent director that worked on Xmen 1 and 2, as both have a habit of not knowing what to do with a cast of more than a handful of characters or use them properly.   Season one is pretty much Shino and Sousouke occasionally joined by one or more support characters searching for the tattoos and stone holders known as the 8 dogs, though oddly enough there is a cat, two demons, a tengu, two men joined by ghost women, and a crow/dragon.  Only one of the 8 dogs is actually a dog, go figure.  I guess such irrational nonsense makes sense to Japanese audiences but not to American ones and doubtfully to European ones.  Though, I honestly find it hard to believe that even Japanese could swallow this as sensical.  Hakkenden is at least tolerable enough to watch through once without feeling like you are at the dentist.  Some animes do that to me.  The animation is a bit on the overly girly BL overly pretty side.  Even many of the male characters look alot more like women than standard fair.  There is a faux BL situation that is never exploited fully or properly though the object of affection shows no sign of interest in BL.  And the pursuer though says he doesn't care if he is a boy, often thinks he is actually a girl and will grow into a lovely woman.  Many of the stories feel a bit more like side stories and offer little to do with the main theme.  They could have made Shino a bit more moral and heroic and not such a whiny brat that annoys more than creates empathy or entertains.  It is hinted he has other abilities such as talking to animals and befriending spirits and what not and that he is not human, but not enough is really done to pursue this angle.  Though we do see a bit of the spirit thing we do not see any of the animal communication save the first episode or two.  It has a few lost opportunities to make the show and characters exceptional.  In the end it is maybe only average or possibly very slightly above average.  It still resembles a manufactured anime though.

My score explains it all. This was a good plot, I especially loved the mc. The previous bad reviews (5/5 5.5/5 etc), pay no heed, everyone has different tastes so it's best if you watched a couple episodes and decided for yourself. The mc is an 18-year-old trapped in a 12-year-old body. Find out the rest bu watching the anime/read the manga! 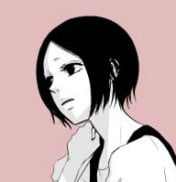 Hakkenden was one of the two animes of the meager 2013 Spring season, which surprised me and I ended up to like. I was kinda skeptical at first, because of the many bishounen characters. Sorry, but most time those animes are kinda poor in my opinion. So I started the anime with low expectations. Story: There was a tragical plague of a whole town named Ootsuka. Mysteriously there were three survivors. Those three are living in an isolated church. One of the boys named Shino is the holder of the legendary sword Murasame, which is described as the sword of life. Now the main church is wanting to get that sword and the peaceful days of our survivors will end here. Stop! You think that sounds like a text-book anime? Well, not at all. At least from the second epsiode on, you will enter in a anime world with questions, surprises and secrets. Well, the setting is set between the traditional japanese world of ghosts, gods and demon and the christian church with a stronger emphasize on the japanese part. Sometimes Hakkenden gives a tiny Mononoke Hime feeling like by a certain episode, maybe because of the japanese god setting. And especially the dog Yatsufusa from Rio reminds me of the 'Moro no Kimi' from Princess Mononoke. I personally would never dream to set those settings together. But it surprisingly worked out quiete well in my opinion. I think the strongest point of the series is definitely the story. It is not one straight line, but telling a cleverly fragmented and interweaved story with the legend of the eight dogs as background. Through the whole series you get keep feed with the righ amount of information and questions, when Shino and his friends are accomplishing their missions. Each episode exploit it's full potential. On the one hand they have the function to introduce the characters and Shino himself further and on the other they are giving out one puzzle of information each time. So you are diving deeper and deeper into this world with the time. I especially like the little last arc seriously.  People, who set great value upon stories will be well served by Hakkenden in my opinion. Animation: The animation and backgrounds are on a good average TV series, even though you can see that the production doesn't belong to the highest-cost ones. You already can tell the animation difference between the first and second season of Hakkenden. Looks like they got more budget for the second season because of the success.  In my point of view the fighting scenes are OK, but could have been better. But if you consider the budget and orientation of the female audience (doesn't mean that the anime isn't suitable for the males), then it's well done. Sound:The BGM fits the setting and anime pretty well and captured the feeling nicely. Most time there are medival or folklore sounding pieces, which works with the setting greatly. You always feel the presence of the soundtrack in the background. Well, I personally love the OP. Sound or lyrical or voice-wise, I can't think of a better song for the opening of this anime. The seiyuus did a good job like always, but I can't find any outstanding or special perfomances.  Characters:  Due the few episodes and still a fairly amount of appearing (good-looking) characters, it is hard to get to know every character deeply. The protagonist Shino is a sympathetic young teenager, who also most time behave like that, but  still isn't like the typical shounen hero (Luffy, Naruto,...). Because that he is seen in every episode, you get to know him the best and can make the best connection with him. As already mentioned due the time matter, the secondary cast is still a little bit blank and some characters seems to be stereotypic and boring (Kobungo INUTA, Genpachi INUKAI) to me. But especially due that some characters not wholely seen, you want to know more about them like Murasame, Sosuke or Rio. Every char is still likeable to me, some more (like Kaname) and some less. I guess with the second season the character rating can get higher. OVERALL: I assume it's still a more unknown und underrated anime. Hakkenden easily goes over my normal expectations and I think it's definitely worth watching, especially who attach importance to the story section. To the male audience: there are two or three little scences with a shounen-ai undertone. But those are really short and light. You can consider it as a fanservice for the females. So if you can bear with it, you may give a try to watch Hakkenden. (hello, I also survived those fanservices for the males from CG 2, OK? Then you definitely should be OKwith Hakkenden. It's nothings compared to CG2 lol) Besides of that you get a reverse harem feeling sometimes, even though it totally isn't the case by Hakkenden. It's maybe because of the many bishies. You don't have a nice and naive teenage heroine here. There's Hamaji as a female support, but I do like her and she didn't give me creeps lol. In general I'm rather bad with the reverse or normal harem genre. So I don't think you have to worry here. All in all the studio has done the best with the budget. DC STAMP: worth-watching lol 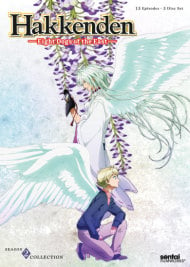 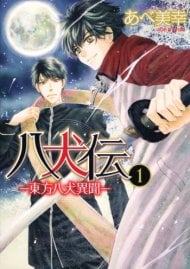