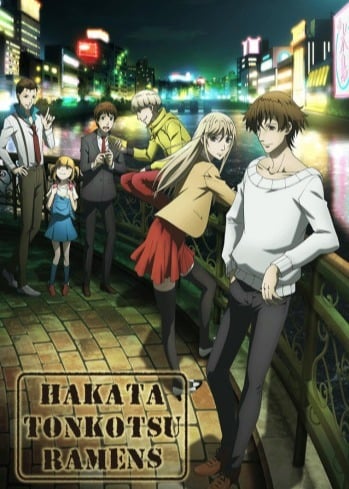 They both feature a large cast, mystery, crime, mobs, a big city, and strange happenings. Lots of tension too. The atmosphere is similar.

Ensemble cast with intersecting/interweaving storylines set in a big city? Check. (So far Durarara!! takes this much more to the extreme, but HTR looks like it is heading in a similar direction as well.) Encounters with the criminal underworld of said cities? Check. (In HTR's case, the entire plot essentially takes place in said "underworld.")

People who enjoy Hakata Tonkotsu Ramens should enjoy Durarara!! as well.  Both have a similar sort of setting - the colorful underbelly of a large city, and a very similar frenetic sort of energy to them.  They also both have a lot of smaller storylines that come to gether to form a more cohesive plot.  Both are very fun shows.

Both Hakata and Durarara have similar settings and background. The characters are grouped within different 'factions' and the way they interact is complex (It's like a spiderweb, one friend can be other's enemy). I have to say that Hakata is the darker anime of the two series. If you like action, crime and mystery, these are highly recommended!

Both have interesting and unique characters. They have good plotlines involving a lot of mystery. Both also have action scenes while Hakata Tonkotsu Ramens is mostly about assassins.

These two are so similar in feel that I suspected the same author of the light novels... Well, I was wrong, but if you see one after the other, you'll likely agree. DRRR is more complex, with a lot more characters, much richer plot, and slower story build, while Hakata is (at least in the anime version) shown having a brief actual plot with some side character stories told in-between. It's more episodic rather than adding up to a larger whole like DRRR. Still, I'd say you're bound to enjoy the other if you liked the first.

This anime is so good and I would highly recomend to watch this if you liked Hakata Tonkotsu Ramens! It is just as violent and has the same themes of gangs and kidnapping. It also has kind of that underlining feel of BL just like Hankata Tonkotsu Ramens. I love both of these anime and I think anyone who likes them should watch the other.

It's the best anime I've seen in all my life. With beautiful animation, impeccable voice acting, incredible background music, Opening & Ending songs fit oh so well & I could go on & on about how unbelievably amazing this show is. Even if it is quite dark & I do suggest people who have triggers to pay VERY close attention to the warnings & tags. Please do go watch this if you can. It is so worth your time. But be prepared to cry. Alot.

in both shows the characters take the law to their own hands (in "banana fish as criminals and at "Hakata Tonkotsu Ramens" as assassins), the shows are full with great fight scenes.

If you liked this anime, the other has similarly quirky characters in a large cast, taking place in a city with a lot of crime-solving involved.

Both series have very similar tonal qualities to them. Large casts of characters all involved in a city with a rather large criminal underworld. Hakata Tonkotsu Ramens just subtracts the superpowers and some of the comedy. It also is less "case-of-the-week" focused.

both shows features a cast of eccentric characters, in a city where lots of crimes take place.

Both anime are about mafia, it's a crime drama with comedy notes, there are friend teams and enemies teams

they umm im not really good at reason but honestly plot wise they dont really have the same vibe both main characters are looking for a lost sibling and the comedy factor between lin and zenji is very similar to kirill and doug umm im sorry im not that good at this but if you liked DD!DK you'll like HTR and vice versa!

Both anime are about mafia, it's a crime drama with comedy notes, there are friend teams and enemies teams

The overall imageand story is similar.

I recommend watching it.

Hakata Tonkotsu Ramens is a gang based story while Fugou Keiji Balance: Unlimited is a detective story. However, both of the stories start with the mysterious and serious charcter getting involved with the talented partner-to-be. In both of the animes the big picture is revealed towards the end where the serious issue is finally introduced. Until then, the characters go thorugh multiple "adventures". There are light-hearted missions to missions that clue to the big serious story. These missions contain a comical side from time to time to keep things entertaining while growing the relationship between the character.

If you enjoy a mystery story with a little bit of light-hearted and comical side, you'll find both of these anime enjoyable.