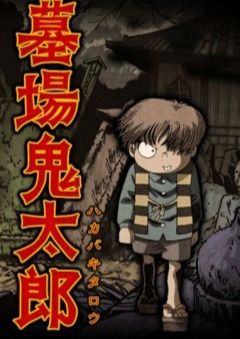 A dark moonlit night, a chorus of frogs croaking in harmony, the sound of wind rushing through the tall grass, and a welcoming gift of two cats eyeballs in a box. Sounds like a pretty good way to start a series to me!

Since his parents died just before he was born, Kitarou is now the last surviving member of the mysterious Ghost Tribe. Luckily, he isn’t alone in the world, as he has an unwilling human named Mizuki acting as his guardian (and cash cow), and his father has managed to semi-survive death in the form of a walking, talking eyeball. Now, as he attempts to make his way in the human world (while taking frequent trips back to hell), Kitarou becomes increasingly involved in both the supernatural events occurring in the city and the incorrigible Nezumi Otoko’s corrupt schemes.

Though yet another incarnation of the GeGeGe no Kitarou franchise, Hakaba Kitarou takes a detour from its predecessors. Whereas previous series have taken a lighter approach, this eleven-part anime feels much more menacing. Kitarou himself is no longer the kind spirit wishing to help humans; instead he has a more sinister presence and seems more intent on creating mischief and leading various arsehole humans into the pits of hell. Even the money-hungry Nezumi Otoko’s plans to make a quick buck become more depraved, involving the plotting people’s deaths rather than simply screwing them over.

This difference in tone becomes all the more prevalent when youkai from the original anime re-appear; for example, episode two sees the return of Yasha – a Chinese vampire that looks like a clump of hair and traps people’s souls in bubbles before eating them (yes, you read that right). In the original 1968 series, Yasha is about as terrifying as a Scooby Doo villain and as threatening as a dopey moth repeatedly ramming its head into your light bulb. However, skip forward forty years, add some atmospheric music and decent animation (while removing any trace of that ‘Hanna Barbera’ vibe) and Yasha suddenly becomes more of an ominous presence. While the demon itself is by no means any more plausible, it at least loses some of the ridiculousness and doesn’t detract from the show’s overall effect.

Amidst its darker subject matter, the series does sprinkle a slight dose of black comedy – well, either that or I’m one seriously twisted individual who enjoys watching eyeballs get run over by cars or jammed into flasks. Aside from the frequent giggle at death and people metaphorically peeing their pants at the spooky, supernatural side of life, Hakaba Kitarou offers up a healthy dose of toilet humour as well, which often originates from Nezumi Otoko. Luckily any fart or poop gags aren’t constant, so the crude humour doesn’t detract from the anime’s horror content and instead works perfectly in tandem with its narrative.

Having studied animation at university, my fangirl radar goes into overdrive whenever I see anime that attempts to do something a bit different with its visuals. So imagine my excitement when I hit play on episode one of Hakaba Kitarou to see a gloriously gloomy visual feast waiting for me. The show boasts a muted colour palette full of mid and dark tones that not only reflects the series’ creepy vibe but also mirrors the monotony of everyday life. The only semi-vivid colours stay in reserve for scenes set in hell – and even then it isn’t light and bright, but more unnatural and ominous. A textured effect reminiscent of Mononoke’s imagery rounds the whole style off, making the whole thing feel that little bit older, and complementing the dull colours.  However, it doesn’t end there as the anime utilises an assortment of other effects, such as an efficient use of CGI and other visual experimentations like the painterly cloudy sky in episode ten, which looks like it’s leapt straight out of one of Vincent Van Gogh’s paintings.

In relation to the other GeGeGe no Kitarou anime, the title character appears to have taken a step down on the evolutionary ladder; he lacks the power of previous incarnations – in fact at times he seems almost useless – and he continues to learn about his world. Whereas before he has been portrayed him as a well-known and knowledgeable youkai who has lived for hundreds of years, this Kitarou is just a child. He’s mischievous, kind of selfish and holds humans in low regard, heck he even flips a woman’s skirt at one point! This actually makes him a much stronger personality since let’s face it, as much as you may like the “nice” characters, they aren’t particularly interesting.

Despite Kitarou’s more intriguing nature, there’s still just one person that ultimately steals the show: Nezumi Otoko is the foulest creation of the entire series, which naturally makes him a roaring success! Whether frequently gassing people with his stinking breath and rancid farts, or creating a snowstorm of skin flakes by scratching his arse, this murine man incites utter disgust at his very presence on screen. Frankly, he’s a joy to watch.

While this anime has a definite creepy vibe, it didn’t frighten me. I wasn’t crouching behind the sofa watching through my fingers, but I don’t ever expect that to happen with any kind of scary film (at this point I shall conveniently ignore the ‘Ring’ incident where I couldn’t sleep properly for a week thinking I was going to die in the middle of my sociology lesson). However, the lack of actual frights doesn’t matter one iota. In truth, Hakaba Kitarou doesn’t set out to be a terrifying shock-fest; it’s simply a deliciously dark series about ghosts, ghouls and the grotesque. If you like the supernatural and a bit of black comedy then you can’t go too far wrong with it.