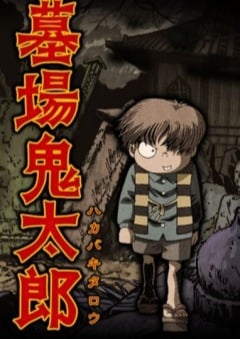 Hundred Stories and Hakaba Kitaro are two peas in a pod; they are filled with horror goodness, but also have an extremely abstract appearance. The main difference is that Kitaro is fairly comedic (in a dry and dark sort of a way), while Hundred Stories focuses on being flat out disturbing. Still, if you liked one of these for the horror element, you'd like the other.

The artistic styles in both series are very reminiscent of each other, and add a lot to the enjoyment of watching them.  In addition, they deal with similar themes--people getting caught up in a supernatural world they don't really understand, and the ones who are their contacts within the world guiding them along.  Additionally, the music chosen to accompany the anime is stylistically unexpected, which adds another interesing depth to the overall experience.

Both Requiem and Hakaba are episodic in nature, finding inspiration from myths and legends from both Japan and around the world. A slightly lighthearted view is taken at times, along side the creepy, giving the viewer a rollercoaster ride through a world of monsters and demons.

If you enjoy a good supernatural show, these are both highly enjoyable examples from withing the genre.

Mononoke and Hakaba Kitaro are both horror anime with a twist: they have a very abstract appearance. However, keep in mind that Mononoke is more intelligent and serious, while Kitaro is far more comedic in a dark and dry sense.

Both series feature the same art director and the results are truly gorgeous to behold; though stylistically rather different they share a striking visual style that if you loved the look of one you really should consider the other a worthwhile watch as well.

They both also have a horror component though with no intent to scare; Hakaba Kitarou is a dry comedy while Mononoke is a bizarre surreal headtrip.

They may have different structure and storytelling and HK is more humorous, but both have similarly original animation design and they're both dark and a bit twisted and deals with supernatural aspects.

Breathtakingly different visuals will be the first thing to strike you about both Kemonozume and Hakaba. This will turn off a lot of viewers, but the real beauty comes in the unforgettable and strangely addictive storylines.

Although Hakaba is mainly episodic, compared to the Romeo and Juliet storyline of Kemonozume, the fantasy aspect of each compliments the other perfectly. I highly recommend both of these shows as a must see. The small group that loves one will certainly enjoy the other.

Dark, odd, weird, twisted and strange: these comic and bizzare anime with astonishing visual styles are sure to appeal to the same audience.

Although both of these shows could be categorised as horror, its not really the first genre I would use to describe them. The visuals can be creepy in Hakaba and Enma, but this is counter balanced by some very dark and dry humour.

I highly recommend both of these shows to people with a more complicated taste, who enjoy the ecclectic mish mash of opposing genres.

Enma and Kitaro are adult horror adaptations of 60s/70s-era childrens' shows. That alone should be reason enough to rec. them to each other, but even if it wasn't, the abundance of monsters and demons within each series should delight any fan of supernatural horror series.

I know this seems like a strange recommendation, but bear with me. Hakaba Kitaro is filled with dry and dark humor; it takes a certain type of person to enjoy that - in fact, it's the same kind of a person who would like Cromartie! Though Cromartie has zero horror, call it a gut feeling that fans of the humor in one would enjoy the other.

Absolutely gorgeous to look at, and frequently rather dark comedies - SZS pulls no punches and wants a constant stream of laughs (whether it succeeds is another matter) while Hakaba Kitarou may just elicit the odd evil little smirk, but they're both completely worthwhile watches.

Kuuchuu Buranko and Hakaba Kitaro are twisted comedies about subjects that aren't usually played for laughs: debilitating psychological problems and straight-up monster-based horror. Both are very quirky, story-wise and in terms of their (awesome) unique animation style. Additionally, they were both originally aired in the same timeslot, so they're geared towards similar audiences.

Both anime are about weird monster creatures living their lives in their monster world, attending school, and going on random adventures. Both have very unique yet awesome animation to go along with the quirkiness of the show. If you liked one you'll like the other too.