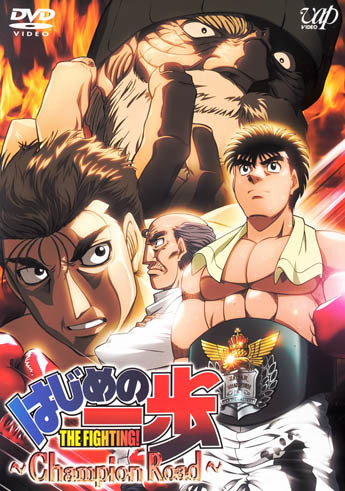 I thought they fit a considerable amount into this TV special. However, some of my main gripes in relation to this series will of course be in relation to what was omitted from the manga. For example, I was upset that they took out Hayami vs Kobashi for Sanada’s vacated jr. featherweight title, it was a fight people enjoyed and gives further character development for the winner for that fight at some capacity, and it also sets up how Ippo first meets Sanada and Dankichi, which made the build up more dramatic, while in this anime, their initial encounter is just at the weigh-in. Other than that, it serves the overall purpose of being a TV special and everything is paced just fine, but being based on a very long manga, your natural reaction is that you’re going to want more.

The character designs are pretty much the same except the resolution is of course a much higher quality than the TV series and it adds more depth to it. The main fight of course still brilliantly put together as usual, but the ending felt repetitive and makes you wonder if this could be the direction Hajime no Ippo could be going. The execution of the hien is of course awkward, but I’m sure there are boxers in real life who have the capability of pulling off some a technique with the angles and speed, just like how Muhammad Ali in his Cassius Clay days could pull off the shot gun. But I liked how Sanada’s fighting style sort of represented an anti-Ippo fighting style at a technical and brawling level. Other than that, I wanted to see how Kobashi vs Hayami would have turned out in anime form.

Not really much to add here from the TV series review except for Yamdera Koichi’s voice being lent as Sanada. If you don’t know him, he was the voice of Ryouga from Ranma ½, Kaji from Evangelion, Gyuunei from Char’s Counterattack, Togusa from Ghost in the Shell, and last and not least, Spike from Cowboy Bebop. I thought he was a very credible addition to this series and I like how he portrayed his outside personality of being an intellectual doctor very well and also portraying that aspect of his personality inside the ring. After this appearance in the manga, he has two more which played some useful parts to certain aspects. It’s a pity the anime so far has been halted which would prevent any future use of his talents. Also, the music in the series is still present and still appropriately used.

Like I said, the ending to the anime is only the beginning in the manga. As much as I don’t like him, former UFC Welterweight champion Matt Hughes once said that a champion is not defined by winning the belt, but how far he can go with it, but that saying applies very well to this product. Ippo finally only achieved one step in his career and his overall goal throughout a huge portion of the manga is to seek his rematch with Miyata.

Subtext: In my view, this ova was more or less a movie and actually seems to have a tendency to act. Especially since this is Makunouchi Ippo's first title defense.

[Action Comedy Sport] All 3 genres were represented and were beautifully presented as in the series, especially the comedy elements had not lost their style. But the boxing action was still very respectable.

Subtext: However, I was irritated by why neither romance, martial art or shounen was present, especially since there was obviously more romance present than almost the whole anime before.

The story consisted solely of the protagonist's first title defense fight and how he prepared for it. It was also tried to move the story between Ippo and Kumi. There was nothing more behind this ova.

The animations corresponded approximately to the level of the last episodes from "The Fighting" or even above. In any case, we were provided with beautiful fluid animations that made up a large part of this fight.

The characters stayed the same as they were in anime. Only a new character was involved which will probably not have an appearance in the upcoming seasons because this is an Ova, but who knows. In any case, there was nothing to complain about.

The music in this ova was much better at starting than in the anime, especially since the soundtracks were there from the start, but only really came into play in the anime in the course of the plot.

My conclusion about Hajime no Ippo: Champion Road

A pretty neat ova that is in no way inferior to the anime. For anyone watching this anime, I recommend watching this ova as well, it is about 5 episodes long and basically has something to do with the plot of the story, so I wouldn't skip it.