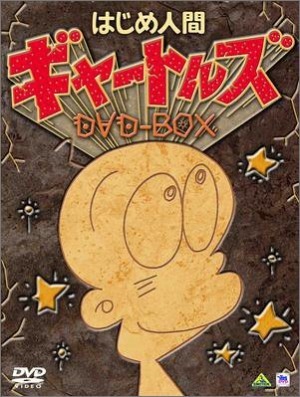 Both anime are about the stone age with a young boy as the main protagonist. While Hajime Ningen Gyatoruz is more about the gag comedy, Wanpaku Omukashi Kumu Kumu is more well rounded with actual narrative, drama and slice of life.

Uiba Shikatani, the daughter of a pet shop owner is heartbroken after some reptile eggs fail to hatch. In his attempts to cheer her up, her father brings home a large, striped egg, which he hopes will successfully hatch (unexpectedly into a green dinosaur whom they call 'Muka-Muka', which are the only words which the baby reptile can speak). Muka-Muka soon becomes the talk of the town and comes into the interest of the town's professor and his wacky inventions, including a time machine which successfully teleports the Shikatani's among other families and their homes to pre-historic times where they encounter several other dinosaurs and enchanted beings on their adventures.

He's small, he's scaly, he's Gon! This tiny Tyrannosaurus Rex may seem like nothing but a lazy reptile that lounges around and causes mischief, but he's also a pint-sized powerhouse filled with energy who can defend himself when the right kind of food is involved. Whether he's riding a sabertooth tiger like a horse, catching fish to make friends or trying to impress peacocks, Gon manages to get into trouble on every adventure he takes.

Doraemon Movie 10: Nobita at the Birth of Japan

When a variety of circumstances leave Nobita, Doraemon and the gang wanting to run away from home, they face the task of finding somewhere to live. However, with every seemingly spare piece of land already owned by someone else, building themselves a house looks impossible – that is, until Nobita has the idea of travelling back seventy thousand years into the past. While the group are making themselves at home in an uninhabited Japan, back at home a glitch in space-time has sent a caveboy crashing into the middle of the city. When they return to the present, Doraemon et al encounter the child – named Kukuru – and take him with them back to their prehistoric paradise. Together, the gang decides to return the young boy to his true time and help him free his captured friends, even if it means facing the dangers of Kukuru’s enemies: the dark tribe.

In a primitive age, a boy named Ryuu grows up under the care of an anthropoid ape. He fights against a ferocious dinosaur with a friend and takes off on a journey in search of his real mother.