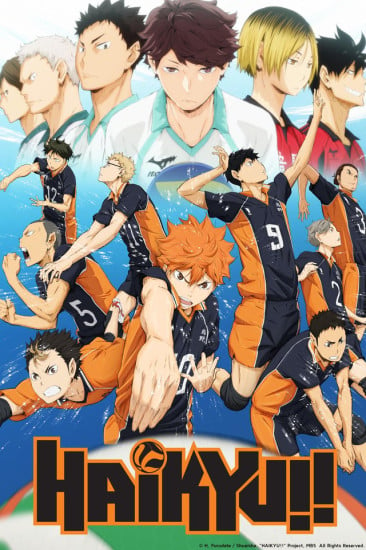 Haikyuu!! Episode 1 - The End & The Beginning

Hinata Shoyo is enamored with volleyball; he is in the 3rd year of middle-school, and will not be discouraged by the fact that he has no teammates to play with. He finally scrapes together a team to enter his first and last official tournament.

Both anime revolve around a sport, the formation and building of a team alongside friendship and rivalry. They have a similar feel to them as well, both being lighthearted and comedic while having an equal amount of serious moments as well. I adore both of them, so if you liked one, I strongly recommend you give the other a try.

This is a recommendation that is immediately apparent after you watch the first few minutes of Haikyuu!!, and possibly the easiest recommendation I’ll make in quite a while. Production IG seem to have stumbled across the perfect formula for adapting sports anime with their fantastic adaption of the Kuroko’s Basketball manga, and it’s a pleasure to say that they’ve done nothing but prove themselves to be more than a one trick pony when it comes to sports shows with Haikyuu!!

Production IG have an almost uncanny knack for portraying sports at their most exciting, their most visceral and their most uplifting in a way that flows seamlessly from episode to episode, all while leaving the viewer begging for more at the end of each episode. The way they handle character interactions means that the shows rarely get bogged down in those annoying sports tropes such as sickening melodrama or the whole “determination overcomes all” bile that turns me right off a sports show. Basically, they know what makes a great sports anime, and goddamn do they do it well!

Naturally both stories focus on a protagonist who initially appears to be at a disadvantage when it comes to competing with his peers, but in each case he has a special talent that gives him a sporting edge that enables him to compete against the very best. There’s also the usual parallels when it comes to a small team who had a proud history, but has since fallen into mediocrity, until our protagonists arrival elevate them upwards in the world high school sports.

The interactions between the characters is sublime in both shows, with a main protagonist pairing that are different, yet complement each other ridiculously well for some intense action, great development and really funny comedy. Everything else from the supporting cast, the sound effects and the pacing are bang on in both shows, so if you found one enjoyable then I fail to see how you could fail to absolutely adore the other.

Haikyuu and Kuroko's Basketball share a strong Production IG flavour, with stylish, energetic sports action sequences and tense interpersonal drama off the sports courts. Another thing they share is that they prefer to lean towards the gimmicky, fantastical side of the sports genre but pull it off without seeming cheap or stupid. If you like one, you're bound to find satisfaction in the other.

Haikyuu and My Hero Academia are shounen that feature a protagonist with big dreams and a friend who seems to be always salty. They both have great character development, progression, and similar themes. Lots of good humor and entertaining character interactions in both.

well firstly ALL THE CHARACTERS IN BOTH ANIMES ARE SO ADORABLE AND LOVEABLE LIKE???? H O W T O H A T E ?? it's physically impossible, they're all so precious and you just wanna protecc the smol children

the settings and genres may be different but so many situations that happen in haikyuu, you'd think like "wow this is so BNHA of them LOL" and vice versa. the protagonists are so alike- midoriya and hinata are just smol beans who are underestimated but they just wanna make it far and tHEY DO. N YOU JUST WANNA CHEER THEM ON.

- Despite the genres of these two being drastically different, they both contain a main character who is somewhat of an underdog who goes to improve themselves immensely and dominate amongst rivals.