Alt title: Haikyuu!! Movie 1: The End and the Beginning 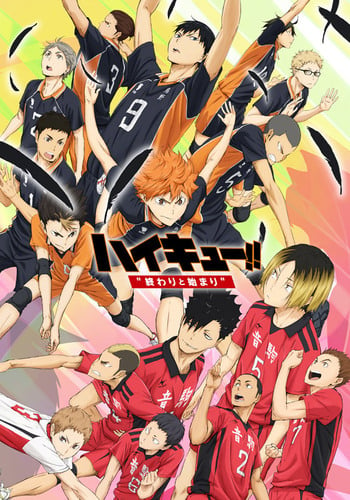 If you're looking for anime similar to Haikyuu!! Movie 1: Owari to Hajimari, you might like these titles.

The first match of Seirin vs Touou Gakuen at the Winter Cup. Seirin swore they would get revenge from the Inter-High, but Aomine's talents grew even stronger and Kuroko's new move is seen through. After having all of his efforts denied by his former light, Aomine, Kuroko is benched and faces humiliation. Seeing his partner like this, something almost beast-like awakens within Kagami, and he challenges Aomine. Aomine had lost almost all sense of fighting, until he and Kagami both intensely face off with each other as they go into the Zone.

Seirin faces off with Yosen in the quarter finals of the Winter Cup. Facing Yosen’s impenetrable defense with Murasakibara at its center, Kuroko manages to shoot his first point. Meanwhile, the ace battle between Kagami and Himuro also heats up. An intense battle is held until the very end. Next, Seirin faces off with Kaijo in the semi finals. Cautious of Kaijo's ace, Kise, and his Perfect Copy ability, Seirin works fast and hard to take the lead. Kise hurts his leg and is benched, so Seirin thinks they now have their chance, but then Kaijo shows them exactly what they can do even without Kise.

A compilation film, recapping the first season of Yowamushi Pedal.

Haruki and Kazuma recap the first five episodes and review some cheerleading basics.